Home Depot quickly restocked the shingles I wanted, so I had those delivered along with the plywood I needed to finish the porch roof.  The first piece to go up was a piece of T1-11 plywood for the biggest part of the ceiling.  I used my pneumatic nailer and 2-3/8" hot dipped galvanized ring shank nails to attach the plywood.  The nails are also coated with an adhesive that is activated by the heat from driving the nail in, so this ceiling is not going to fall down. 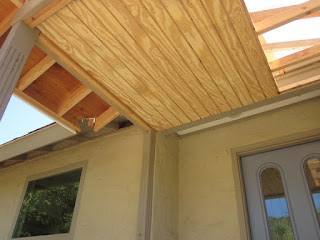 To get the plywood for the roof deck up on the roof, since I work by myself, I leaned my extension ladder against the edge of the roof and pushed the 0.6" plywood up.  It worked well; I will use the same technique to get the bundles of shingles up on the roof (except maybe I'll pull those up the ladder with a rope). 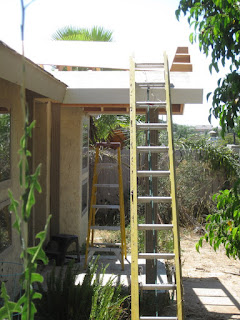 Here are the two sheets of new plywood I used, nailed in place; the rest was recycled from my old concrete forms. The final small triangles of plywood would soon be in place. 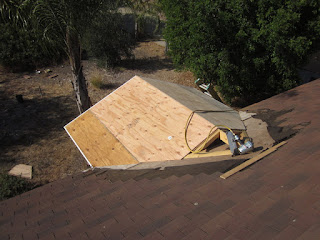 The fascia on the front of the porch looked too bare and wide, so I added pieces of my usual PVC baseboard to the top, upside down, to give it some interest.  The before: 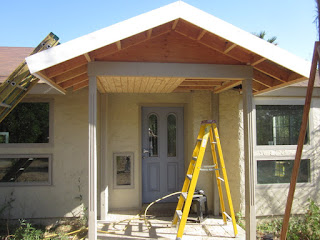 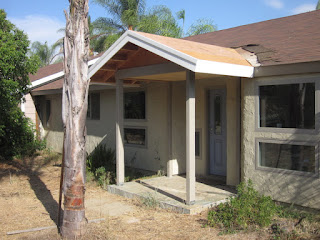 With the rest of the ceiling installed, I started adding the soffit.  More T1-11. 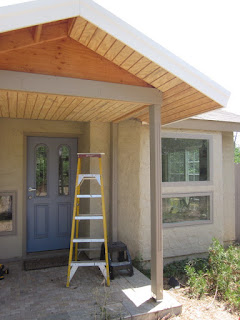 With the soffit finished, I just need to add some trim strips to hide some edge gaps, and some other decorative trim around the base and top of the posts.  But I'm going to do that later.  What I really wanted to see was what it would look like with some color.  The remaining house trim paint I had didn't go very far, but it did make the visualization easier. 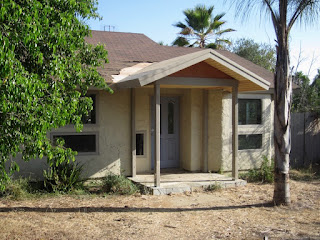 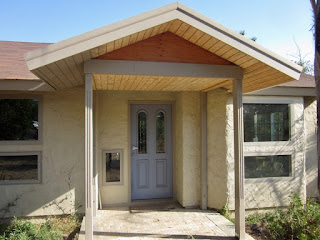 Now I need to start on the shingles.  Still hot here, so planning to take my time . . . 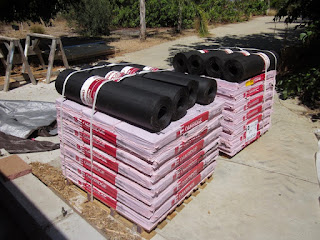 Posted by Chris Llana at 8:53 PM No comments:

So the idea was that this post was to cover the construction of the whole porch roof, but it was not to be.  I went to Home Depot to order truck delivery of the construction lumber and plywood I would need, but they had discontinued the bargain $20 delivery charge using their small truck (they will still rent you the truck, but that was less attractive because of the logistics and dogs).

So anyway I decided to buy the needed lumber and bring it home in my car in a couple of trips spaced out (I can fit ten-foot long 2x6s or whatever in my Honda CR-V).  I will have to pay $80 for the big delivery truck (with the forklift hanging off the back) when I buy the shingles; I can just add the plywood at the same time.

I need 80 bundles of shingles, but they didn't have that many in stock, so I need to wait (don't want to pay for two deliveries).  So the completion of the porch roof will keep until Part 2.  So be it.  The weather has been abnormally hot in any case, so I really don't mind not having to spend more time on the roof for another week.

The design of the porch roof called for 4x6" columns at the front corners, and I had placed anchor bolts for those when I poured the concrete.  Initially I thought I would tie the supports for the house-side of the roof into the house structure, but there was no good (strong) way to do that except to use another two separate columns for the back two corners.  These columns were fastened to the house with big lag screws.  Since I have documented all my remodeling work with photographs, I went back and found the photos of the exposed (drywall off) inside parts of the house that I would be drilling for screws to ensure I would be screwing into multiple studs.

Then did a test fit and drilled holes. 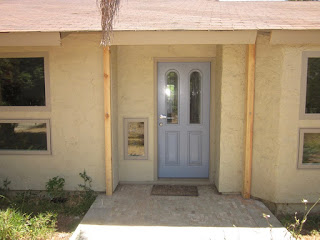 The existing fascia boards had to be cut away, as well as some other structure at the top of the wall.  I wanted the top of the beams (including added top plates) supporting the porch roof to be at the same level as the top of the house's stud walls. 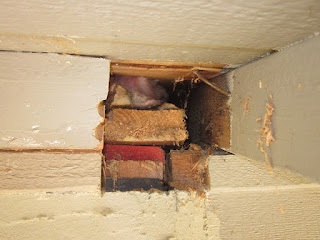 The porch roof would be supported by a basic structure of four posts, and 2x8" beams between the posts (sides and front).  The strongest way to transfer the load into the columns was to use lap joints.  I cut away a half-inch from both the columns and beams, giving an inch overlap. 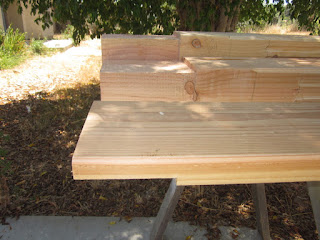 To make the columns more attractive, I used a heavy-duty router and a round-nose bit to machine fluting into the column sides, and also routed a bevel along their edges.  You really have to do this before you put that structure up. 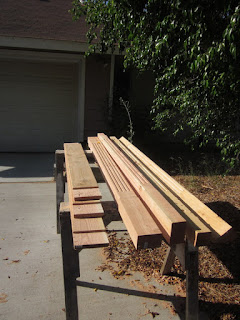 Here's what the basic support structure looked like, assembled with three-inch screws.  I also gave them a first coat of solid stain while they were sitting on saw horses. 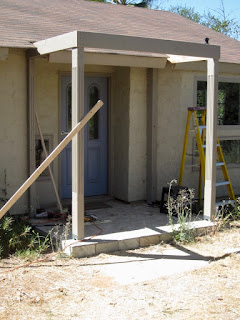 The 2x8 beams are strong enough, but I wanted a timber-framed look, so I added spacers to the inside of the beams, and then 2x6s on top of the spacers (2x4s on the front).  This also made the structure even stronger, and much stiffer. 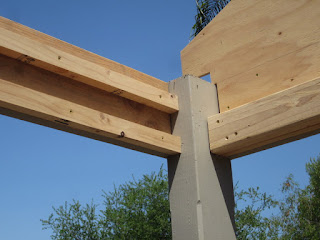 I had decided on a closed-in porch roof, with a front and a ceiling.  The front will be covered with stucco to match the rest of the house walls, and therefore needed plywood.  Installing the plywood now had a couple of advantages.  First, I could layout the proper angles (22˚) on the plywood, which would then provide a guide for the next steps, and second, the plywood could be used to support the ridge beam. 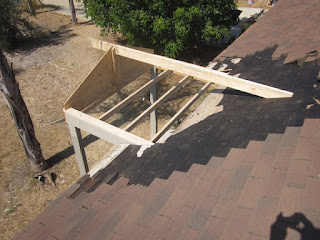 I used precise scale drawings to get the geometry right, and transferred those measurements to the full size construction.  This also told me a ten foot 2x6 would work for the ridge beam.  I set it in place and adjusted it in and out until it was level.  I also installed the joists that would support the ceiling at this time; it would be difficult to fasten the joist hangers if I waited until after the 2x4 top plates were fastened to the beams. 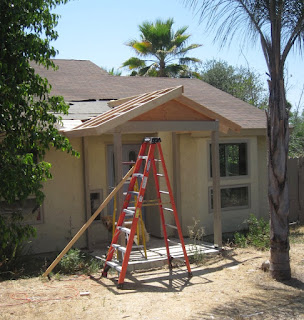 Next were the rafters on the back part of the porch roof.  While the front rafters were cut from 2x6s, the shorter back rafters were cut from 2x4s (all on 16" centers).  The main house roof was framed with trusses spaced on 24" centers — no snow loads here in Southern California, although I still would have use 16" centers.  All the angles for the pieces on the back part of the porch framing were determined by getting up on the roof and using straight edges and magic. 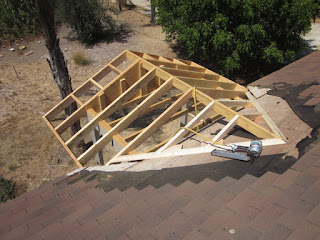 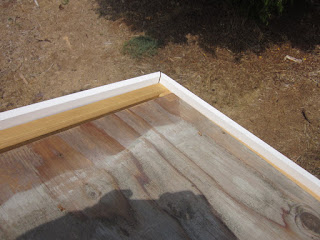 Oh, did I say I don't have the plywood yet?  Well, I happened to walk by the forms I used for the garage extension concrete foundation, and saw that the plywood was still in good condition, and the correct thickness.  Not enough of it to do the whole roof, but a decent part of it.  Will still need to buy a couple of new sheets.

The fascia board is 1x8" and went on over the 2x6" structure.  With a 0.6" overlap on top, that left an almost 1.5" overlap on the bottom.  A soffit will be installed to cover the underside of the eves, using T1-11 plywood (19/32"), which has a rough surface and grooves to simulate tongue-and-groove boards.  I will also use the T1-11 for the ceiling.  But back to the fascia overlap, the soffit will therefore be recessed almost an inch below the lower edge of the fascia — as it should be.  Part 2 will reveal photos, no doubt.  But here is the lower overlap. 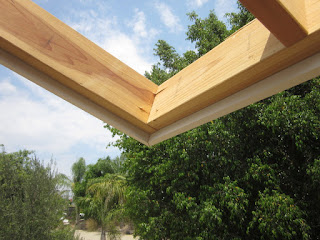 So this shows my recycled plywood on, the first part anyway. 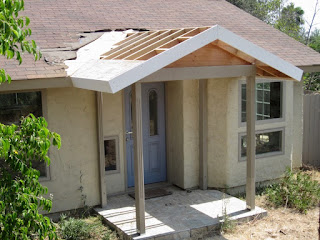 And this gives an idea of what the grand entrance will look like when finished (need to use your imagination).  Better than just a door in the side of a long wall. :-) 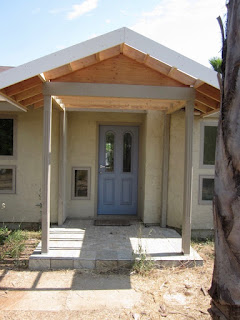 Until next time . . .  and then afterwards, shingle time.
Posted by Chris Llana at 9:31 PM No comments: