After all the work getting the laundry/mechanicals room this far, the tile floor seemed like the holy grail.  Finish the floor, and I will have arrived!  (or so was the feeling, to be explained later)

There have been other distractions.  Like restructuring one of the roof trusses in the attic, as a preliminary to rerouting the large air return duct to the furnace (which followed a convoluted path into the garage attic space, apparently done when half of the garage was converted to living space, and the furnace was moved from the garage to the attic—a half-assed job, to be sure).

And replacing the leaking old toilet in my one working bathroom.  The new one is an amazing  Kohler 1.28 gallon/flush technological marvel (an "AquaPiston" device replaces the antiquated flapper valve).  Instead of lots of water swirling round and round and making a grand leisurely exit, the Kohler flushes with a two-second gulp that instantly sucks everything away.  Gone!  At first, I thought there was a mis-flush, like when a flapper valve starts to open and slams shut.  But no.  Everything gone in a flash.  1.28 gallons!  Sha-zam!  (and eligible here for a $100 rebate)  I have another similar 1.28-gallon Kohler with the same technology sitting in my future kitchen waiting for me to get around to work on my master bathroom. 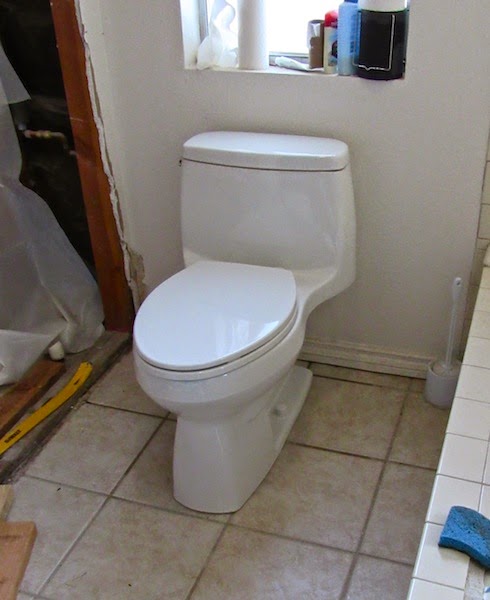 And then there's the matter of scraping and painting the roof eves and fascia on the back of my house.  After starting in on that project, it became apparent that the eves had not been painted since the house was new in 1984.  Not a fun job, but now done—two coats of solid stain.  The original: 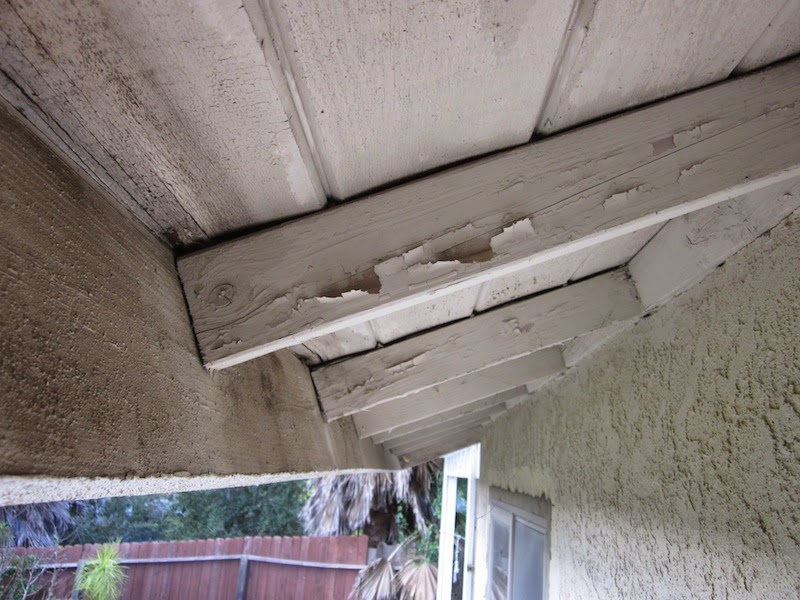 Back to the laundry room.  At the end of my last post, I lamented that the concrete floor would need more grinding to remove a high ridge.  I did this over two days (although each of the two sessions took just a few minutes).  I covered everything with plastic, and sealed off the entrance to the room, and started grinding with a diamond cutter.   Soon there was so much dust in the air that I could not see the grinder in front of my face (using my full-face respirator, of course).  It took a day for the dust to settle; I checked for remaining high areas and started grinding again.  After another gray-out, I declared the grinding done. 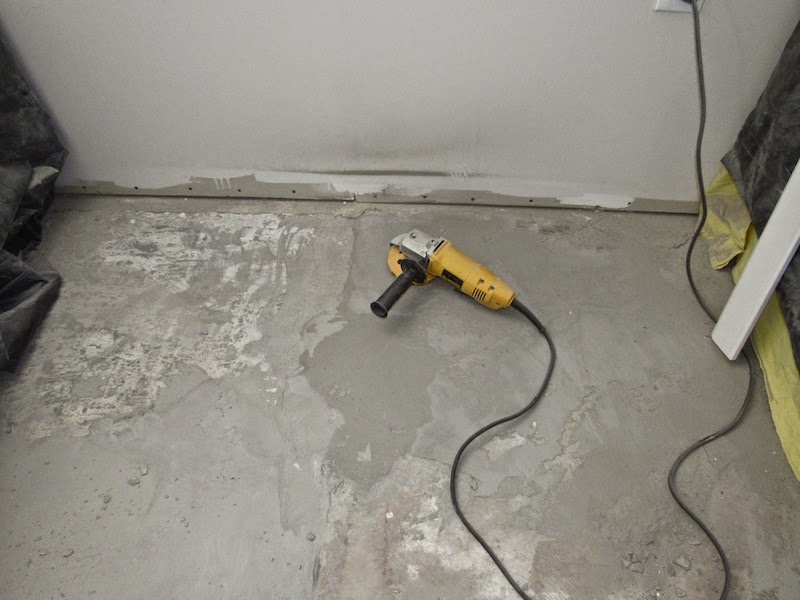 Almost ready to start on the tile, except for the clothes dryer sitting on the floor.  I did my imitation of a pyramid-builder and pushed and pulled the dryer up a 2x4 ramp to its final resting place on the platform. 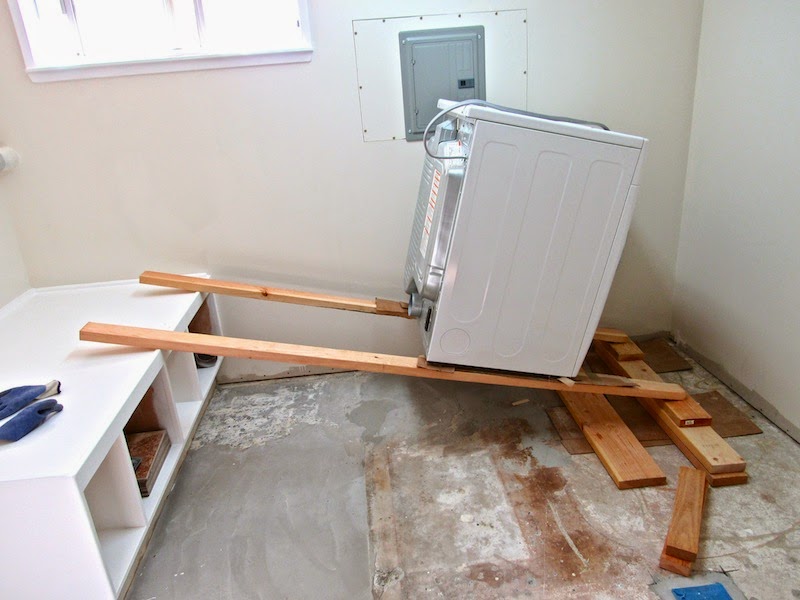 I cleaned off the floor and used a chalk line to snap a grid for the tile.  I was using a nominal 12" x 12" porcelain floor tile that was actually 11.75" on a side, so I laid out a 12" grid, which allowed for a quarter-inch grout line between tiles.  I did not use spacers—just set the tile by eye according to the grid.  So there was some variability in the width of the grout; let's just call it informal.

The tile was installed in the normal fashion.  Thin-set mortar was mixed and spread with the flat side of a trowel to make sure it had good adhesion to the concrete slab, then mortar was spread evenly using the notched side of the trowel.  I did adjust the thickness of the mortar to compensate for the areas of the slab that were still not quite flat.  Normally the tile is then set down on the mortar, but I chose to "back-butter" the tile, that is, to spread a thin layer of mortar on the back of each tile to ensure good adhesion with the mortar bed.  Then the tiles were wiggled into place, adjusting the spacing, and pushed down as needed so that each tile was more-or-less level with its neighbors.  Some mortar squeezes up between the tile (where the grout goes)—this had to be cleaned out (I use a screwdriver), and any mortar getting on the top of the tile has to be cleaned off with a sponge.  Two days later, grout was forced into the cracks, with the excess cleaned off with large sponges (cleaned and water squeezed out, frequently).

I put the tiles down in four batches, over that many days, allowing the thin-set mortar for each batch to fully harden before moving to the next batch.  I starting grouting the first batches of tile before I was done putting down the last batches.  Here are photos of the tile starting to go down, and the final floor. 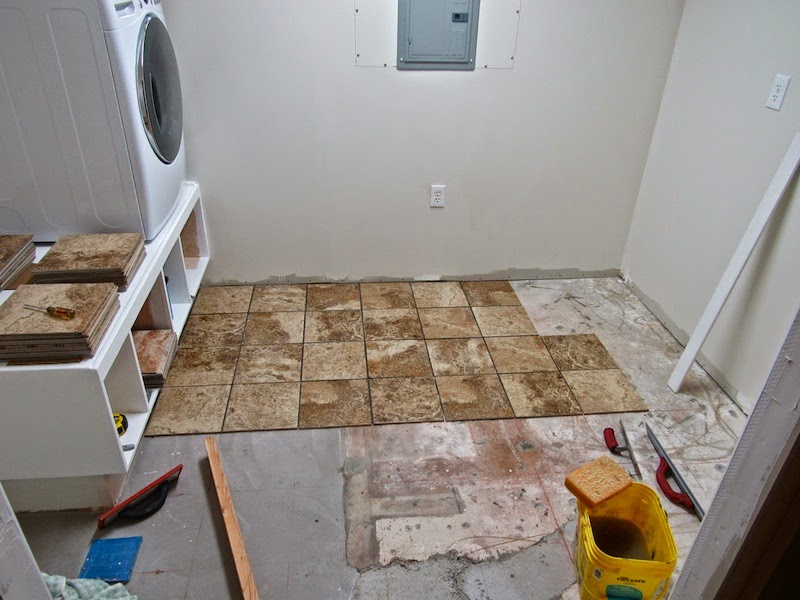 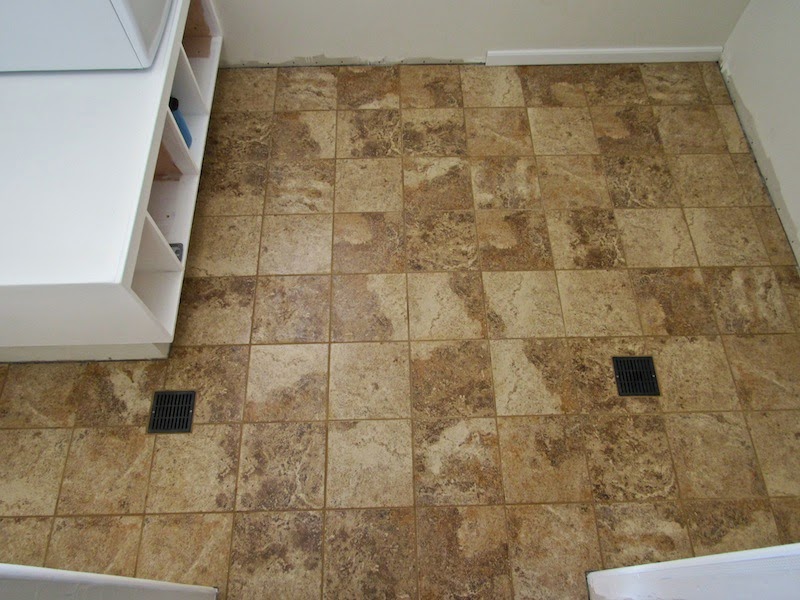 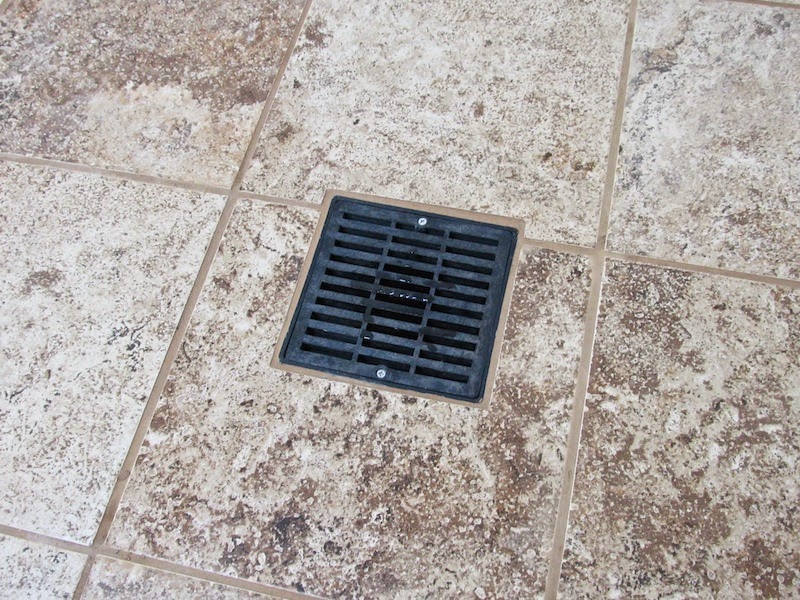 I still need to install baseboard (using waterproof PVC baseboard).  After so much work, it was nice to see the room looking finished, but I was not able to take much solace from that.  I had originally thought the laundry room would be one of the last steps in my remodel, but after my planning started to coalesce, the laundry room became the laundry/mechanicals room.  Most of the rest of the remodel cannot proceed until the water softener and new water heater have been installed, and integrated into a new hot and cold water supply system.  Kitchen, two bathrooms, pottery studio—they all need new PEX water supply lines in the walls and connected to fixtures and valves before the more visible work can proceed.

It's the next major push, but I have a few more mundane tasks I want to get out of the way before getting to it.  Stay tuned . . .
Posted by Chris Llana at 11:24 AM No comments:

The washer/dryer platform is in.  First I did the design, then cut out the pieces of 3/4" cabinet-grade plywood, then started assembly in the garage. 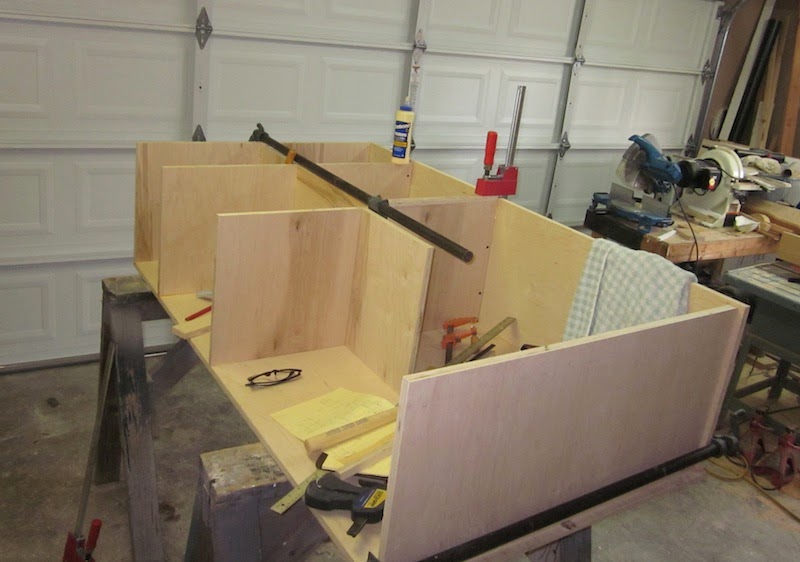 Once basic assembly was complete (glued and screwed), I temporarily screwed the top on and moved the platform into position on its base in the laundry/mechanicals room.  I took off the top so that I could screw the platform to the base and to the studs in the walls.  You can see that the platform is extensively cross-braced to resist out-of-balance loads during the washing machine's spin cycle (although when the machine detects unbalanced spinning, it stops and slowly rotates the drum in an attempt to redistribute the load). 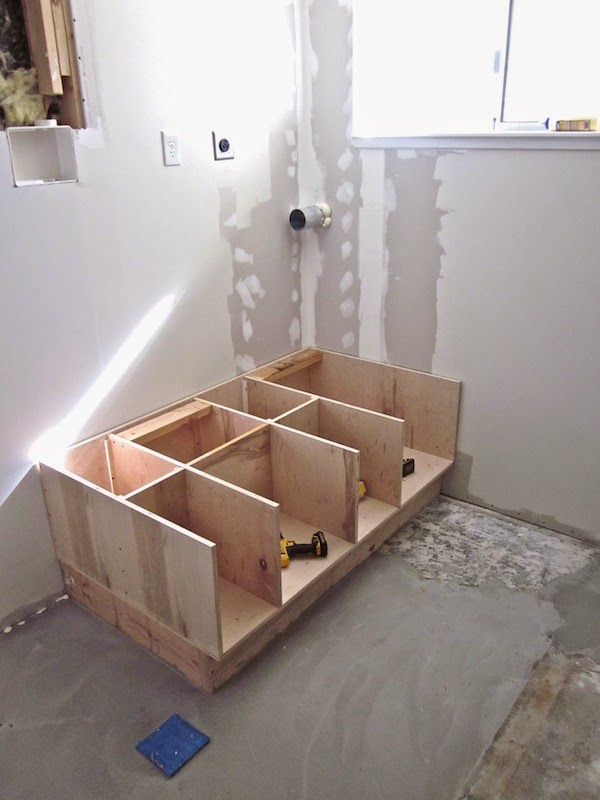 With the platform securely fastened, I screwed the top on, added reinforcing pieces of 2x4 lumber to the front edge, and put on trim pieces.  A coat of sanding sealer followed that. 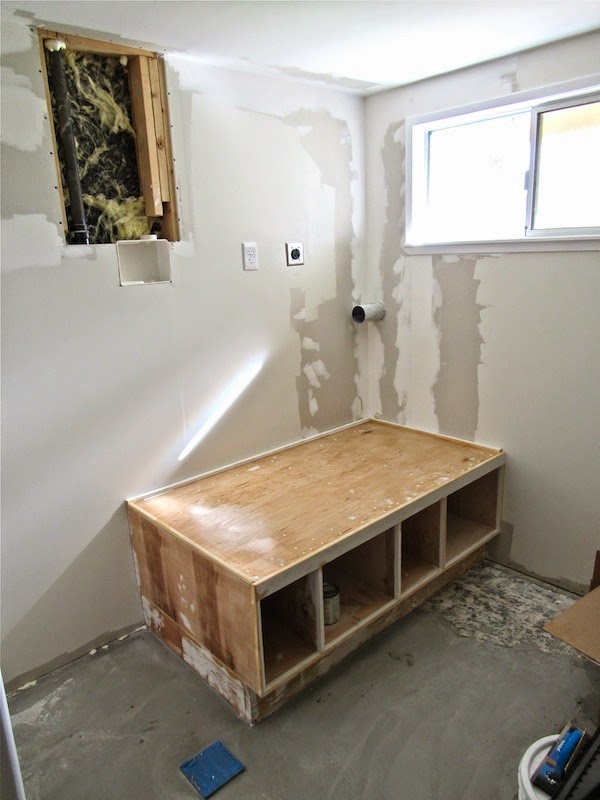 After that, two coats of semi-gloss paint.  No fancy wood trim; this is a laundry room, and future home to the water heater and air handler.  I also finished applying joint compound and paint to the walls (everywhere except where the washing machine hot and cold water lines will be installed inside the wall). 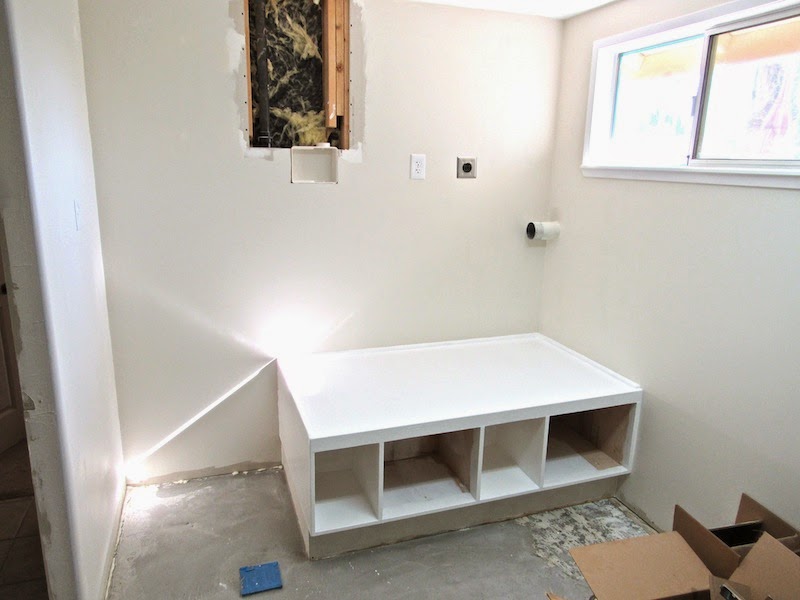 There are four openings in the front of the base.  The two narrower ones (painted on the inside) are cubbies for laundry detergent and bleach (on the left), and for a small wastebasket for lint (middle right).  The two wider openings will each (eventually) get two drawers.

I'm going to let the paint harden for a week before I loft the clothes dryer up onto the platform (easier said than done, but still much easier to do than lifting the much heavier washing machine).  When the dryer is in place, I'll start putting down the floor tile.  In the photo below, I've put the pieces of tile I have (still need to order much more) on the floor for a first look.  Notice the floor is flat in the foreground, but in back, there is a rise that is bad enough to need more remedial work than adding some extra mortar.  Can't escape that awful dusty grinding . . .  Ugh! 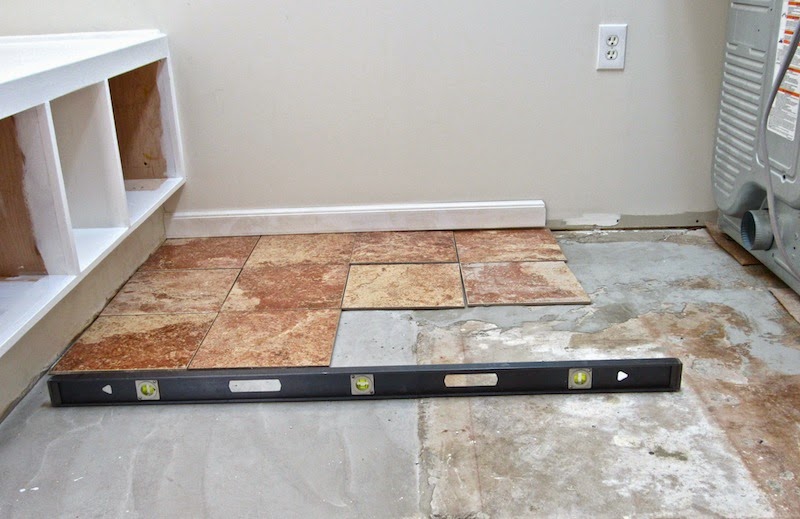