Well, the new wall isn't yet finished, but it's been awhile since the last post, and the wall is done except for joint compound and paint, so this post will bring you up to date.

It's taken awhile because the old wall was dividing the house proper and the attached garage, so it was load-bearing, and the ceilings were not on quite the same level.  So I needed to add structure in the attic to support the mild load of the roof (already supported with trusses), and add structure for the new portion of the bedroom ceiling to make it level with the existing ceiling.  Fussy work.

The other time consumer was what had originally been a compartment for the furnace (located in the garage when the house was built).  When an early owner converted the back half of the garage to a bedroom, the furnace went up in the attic, but the small compartment was just walled over, sloppily, instead of ripping out the platform and restructuring that space into a useful part of the house or garage.  What I ended up with was an appalling mess, consistent with the other work by this particular contractor that I uncovered when I put new windows in that part of the house.

In my last post, I had built the new wall, from the garage side.  That built, I added the supporting structure in the attic and then removed the old bedroom wall.  In this photo, you can see the new insulation (installed early to get it out of the way), with some of the old garage ceiling drywall still in place (to hold up the water lines and electrical cable above).  I have just started putting in the 2 x 4 cross supports for the new ceiling drywall at the left end (with spacers to make them level — garage trusses lower than the house trusses). 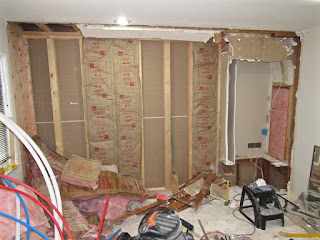 At the right end of the wall is the old furnace cubicle, partially removed (including an old electrical receptacle for the original furnace), which will become a new small closet (it protrudes a bit deeper into the garage than the main bedroom extension).  On the very right (pink insulation), the conversion contractor did not install floor-to-ceiling studs, and in one place had two layers of drywall.  A lot of the structure was not fastened to anything but the drywall, so when I removed some of the furnace base structure, the drywall in the hallway simply broke free! 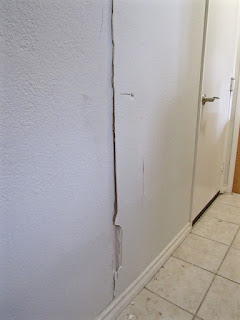 What was holding it all together was more than a half-inch of joint compound.  When I put a straight-edge against the wall, I discovered there was a large bulge.

So back on the inside, I installed a baseplate at what would be the new floor level, and a corresponding top plate at the ceiling, aligned with the rest of the bedroom wall.  Then I cut away enough of the maze of wood to install a couple new floor-to-ceiling studs.  The new baseplate, and the old half-studs that extended down only as far as the original furnace platform: 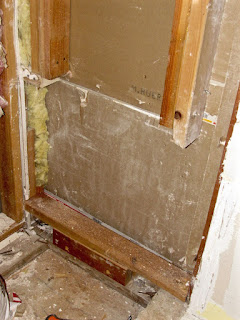 A lot of tedious work.  The dogs didn't seem to mind. 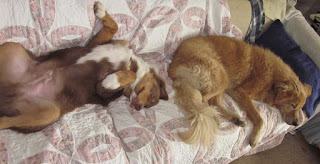 And then back to putting in the rest of the structure for the new ceiling. 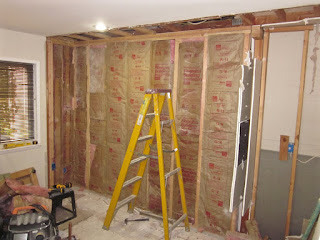 And the structure for the new closet (sorry, I forgot the photos, but it's a basic stud wall), and then drywall goes up, followed by joint compound.  This is where I am now: 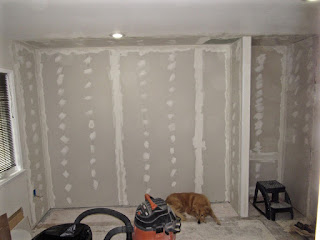 With all the debris from this (and more demolition in the guest bathroom) piling up outside, it is once again time to rent a truck and make another dump run.  Really hate it, but it's so nice after it's all gone. 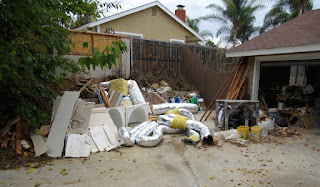 Next, more joint compound and paint, and more attic work getting ready for the new heat pump and duct work.  High temps in the 80s ahead (November in southern California), so no worries yet about not having a heating system in place.

Posted by Chris Llana at 2:30 PM No comments:

Time to move the wall!

This post is actually part one of the two-part wall move, and then there is the subsequent part about adding the bamboo flooring, and oh, the part about building the base for the queen-size waterbed — so unfortunately, no instant gratification.

Oh, in case you haven't been keeping up, the purpose of the wall move is to make one of the smaller secondary bedrooms big enough to be the master (because the original master bedroom became the home theater).  The wall move gives the bedroom 21" more width, the added space taken from the garage, which will get a six-foot extension next year (or so).  Juggling inches, as it were.  Why 21 inches?  That gives enough floor space on the far side of the bed to walk and open drawers in the base of the platform bed, and it also happens to be the largest amount that the wall could be moved without impinging on the garage door track.  22" and I would have to wait until I enlarged the garage and installed a single-car garage door.  Too long a wait.

So let us begin. 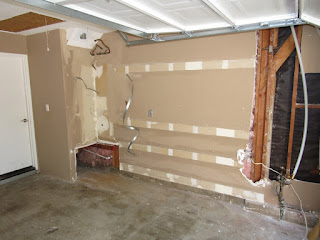 Since this is a garage, there is a requirement for a concrete curb to contain water — and I once read — gasoline leaked from cars.  This requirement has been around a very long time, and gasoline cars at one time routinely leaked gas, oil, radiator coolant, brake fluid . . .   Still pretty primitive compared to electric cars, but what are you going to do?

Anyway, any new concrete curb, on which a new wall will sit, needs to be anchored to the concrete slab in some way.  I cut a slot in the slab for the new curb to key into. 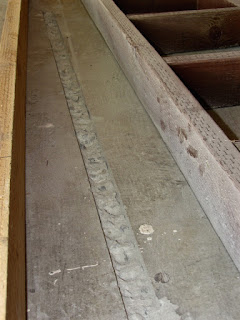 On the right of the above photo is framing for the floor.  On the left I placed a form to keep the poured concrete in place, right up to the left edge of the groove.  The form was cut from a 2x6, with vegetable oil rolled onto its inner surface to keep the concrete from sticking.  I cut it so the top of the form was where I wanted the top of the concrete to be, which was also the same height as the bedroom floor (the house concrete slab).  I kept the form in place with heavy retaining wall blocks. 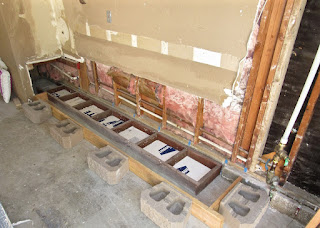 Since I was hand-mixing the concrete, I chose to build up the new sub-floor using pressure-treated construction lumber, with the open spaces insulated with 1" foam and fiberglass insulation.  On top of this framework, I applied 3/4" oriented strand board (OSB).  Then I poured concrete to form the curb (adding steel rebar to limit cracks). 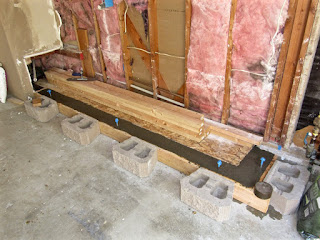 I troweled the concrete level and inserted anchor bolts for the wall's base plate (blue masking tape wrapped around the threads of the bolts to keep them clean).  After a day, I stripped the outer form off and bolted on the 2x4 base plate, then using a plumb bob, marked on the ceiling the location of the corresponding double top plate.  With the top plate screwed into a roof truss, I could then start filling in the studs. 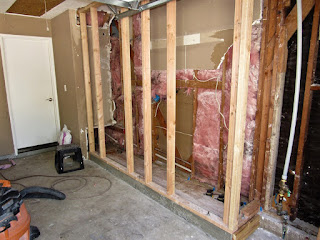 As I mentioned before, 21" was the absolute maximum amount I could move the wall (build a new wall and remove the old one).  I actually had to install some new structure in the attic so I could bolt the garage door bracket further over, and cut off the end of the ceiling bracket so it would not be in the way of the wall. 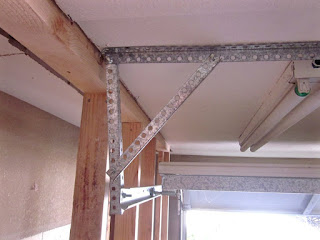 Closer to the front of the door, there is a stiffening flange on the railing that only has clearance for a sheet of drywall.  So the wall really could not even have been moved 21.1". 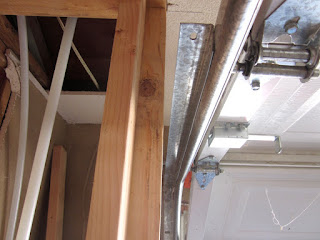 With all the studs in place (and this involved some further time-consuming removal of existing structure), drywall could go up.  I substituted two 4x4 timbers for standard 2x4s, so that I could later on drill them for 1" dowels to use to hang my three ladders. 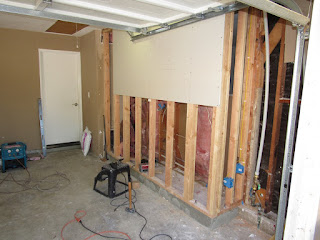 Two electrical boxes also had to be installed before drywall went on — one receptacle in the bedroom and another in the garage (these will have a GFCI in the circuit — needed for garage receptacles, not that water in the garage is something we see in Southern California's now-permanent drought). 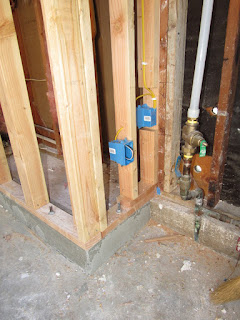 Then the rest of the drywall (plus some joint compound): 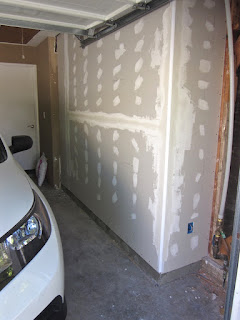 I can't really make it pretty until after the old garage door is gone.  So now work moves to the inside of the house, where the old wall gets removed after I add some structural reinforcement in the attic.  Looks like this now.: 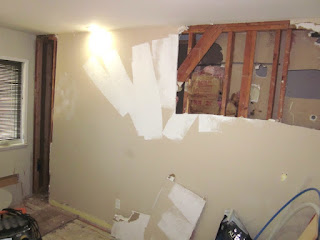 I'm also cleaning up the attic in preparation for the new heatpump and ductwork.  Messy, cramped, unpleasant work requiring a full-face respirator and headlight, not very conducive to photo-taking.