I’ve been holding off on the front porch roof, so just drawers this time — ten of them (one from last time that could not be installed due to lack of slides, and nine new ones).  I’ll also update my electric car quest.

I went down to the hardwood store and spent more than $100 on wood for new drawer boxes, and as it turned out, that gave me just enough for nine drawers (and that’s only for the four sides).  Here’s what it looked like cut to size and with dovetails routed. 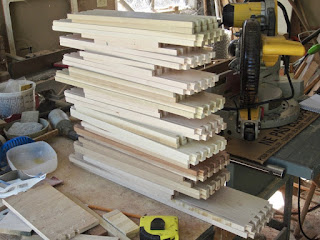 You can see $100 doesn’t go far, but to be fair, most of that wood is either cherry or maple, with the rest being poplar.  Add drawer bottoms, fronts, drawer pulls, full-extension drawer slides, glue and finish, and you get an average cost of about $40 per drawer, and that doesn’t include the considerable cost of labor, if you were to pay someone else to do that.  Not surprising that most kitchens scrimp on drawers (and quality).

Here’s a photo of this batch of drawers in process.  I’m getting faster, but it still is a very time consuming effort. 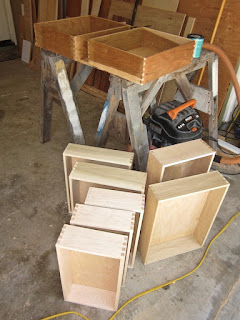 So, three new drawers for the master bathroom vanity, which gets perhaps the most elegant drawers (cherry boxes with striped mahogany fronts).  The new ones are the three on the left.  Still a few to go. 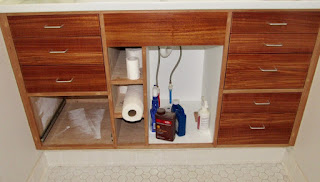 The cherry I used was not all from the same source, and some had both heartwood and sapwood, so there is some visual interest (if you like that — I do). 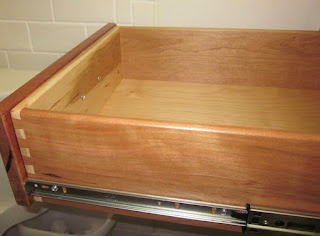 I make and install the boxes before installing the fronts, because I like inset drawers, and it would be almost impossible to install the fronts first and expect to get a uniform gap around the front. 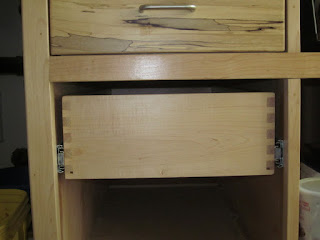 Here’s the same drawer with the front attached.  The new one is on the bottom of the stack. 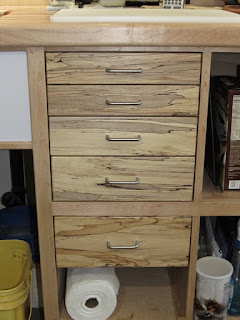 I made that particular drawer very deep, taking advantage of the 30” depth of the cabinet.  Most of the other drawers I made shorter.  But it will be good for holding a lot of things. 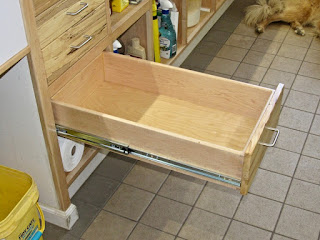 The other three new kitchen drawers are on the other side of the kitchen; in this photo, the bottom three are new. 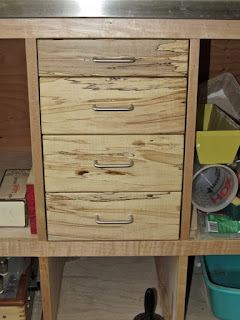 The pottery studio got three new drawers (thirteen done, just three remaining).  The new ones marked with the arrows. 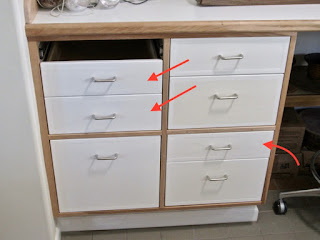 Here’s a shot of one open.  Love those full-extension slides. 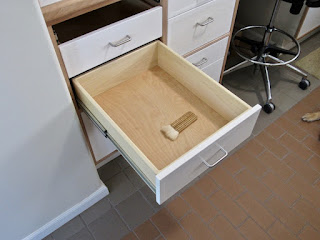 As I noted in my first report, I put a deposit on a Tesla Model 3 (since April 1, 2016); Tesla says that should mature at the end of this year (for the dual-motor variant), but that’s with the long-range battery option, which I don't want.  I should be able to take delivery of a dual-motor Model 3 with the standard, 220-mile battery early-2019.  Not such a long wait, considering my garage extension will not be ready before then.

But I still have a few reservations with the car, as good as it would be to drive.  Among other things is the glass roof (perhaps too hot for San Diego’s fierce sun), and the lack of a rear hatch (it has a conventional trunk opening, difficult to load big things).

More significantly, the Model 3 uses an app on a smartphone to unlock and operate the car, and since I have no use for a smartphone, that obviously would be a problem.  It does also have an RFID keycard, but that has limited functionality.

A lot of people want a regular fob — not just me.  The good news is that Elon Musk told the folks at Consumer Reports that he is considering providing a key fob to owners, and one forum report quoted a Tesla service rep as saying a fob is “in the works,” albeit with no time frame provided.  I guess they first have to work through their production issues.

And for the present, the only interior color option is black, which for me is a non-starter.  A white interior is in the offing, and next year they say red will be offered.  Are they channeling Elvis Presley, or have a fondness for 1960-vintage cars?  No tan!?  I want tan (or sand, beige, cream, light gray), and will wait for that.  What if it takes years for that to appear, or never?

I discussed some other alternatives to the Model 3 last time, but now the primary one is the upcoming Volkswagen I.D. AEROe.

The VW I.D. AEROe is supposed to be a premium sports sedan that could be released in the U.S. between 2020 and 2022, with a smaller sporty hatch five-seat derivative following in 2023.  While the small first-to-be-released I.D. Neo hatch will have just one motor, the I.D. Crozz Tiguan-sized crossover will have two motors, as will the I.D. Buzz passenger van.  I expect the AEROe and smaller derivative will also have two motors for all-wheel-drive, a must-have for me (for four-wheel magnetic braking).  There have been no leaks about what the AEROe will look like, but a concept version may be revealed at the Paris Auto Show early-October this year.  At least one German publication thinks the I.D. Vizzion concept car will be the basis for the AEROe:

Right now, my interest is in the smaller, sporty hatch five-seat AEROe derivative, which unfortunately looks to be five years away, but who knows?

In the meantime, Volkswagen has built an electric Pikes Peak race car — the I.D. R.  VW says the design was intended to bear a family resemblance to its I.D. line of electric road cars.  That would be nice, but a real stretch, considering: 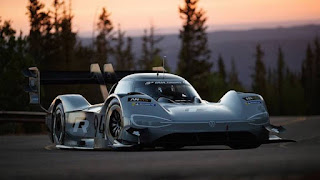 The Pike’s Peak Hill Climb takes place on June 24, about a week from now.  Here’s a preview of the car on the mountain.  Fast!


UPDATE: The VW I.D. R won the race, by a large margin, and also set a new course record — the first car to ever break eight minutes!  Video report: