Every so often I try to imagine what it would be like to have the house completely finished.  It’s hard to imagine that, because almost everywhere I turn, there are projects beyond my planning horizon.  And yet, sometimes I am startled by how much has already been accomplished.

And then I realize that almost everybody else lives in a house that is “finished.”  Sigh.

My current unplanned break has given me a glimpse into what a “normal” life might be like.  But only a peep.

My modus operandi during the almost five years I’ve been working on my whole-house remodel/renovation has been to move from one major project to the next, not always in a logical order.  The last project completed was the kitchen countertop, which also enabled me to expand my daily routine with new menu items.  For example, since I now have a cooktop, I can make an omelet, or cook the new generation of vege-burgers (their molecular scientist developers like to call them “plant-based burgers”).  Moving toward greater normalcy, as it were — a theme this post explores.

At the end of my last post I was dismantling the gluing frame for the countertop, so clearing out my garage for the car to move back into its rightful home.  I predicted that I would next be building cabinets for the pottery studio.  With those built, I could buy and install the electric kiln and reengage in one of my major hobbies — that of creating (or “throwing”) pots.  “Pots” includes all manner of clay creations — bowls, vases, cat dishes, etc.

As I was preparing to order more plywood for the new cabinets, a wildfire broke out just to my south — the Lilac Fire.  It grew.  I spent the first day watching the continuous TV coverage.  The major highway I used to get to Home Depot was closed for several days.  That was the incident that began my hiatus from my major project routine — an accident, to be sure.  The fire started at the side of I-15, probably when somebody threw a cigarette out a car window on that hot windy day.

I saw that a couple of the gourmet chefs who are selling the new vege-burgers in their many-star restaurants were putting sliced avocados on them, and, as it happens, the avocado trees I planted now have fruit on them.  But when to pick?  Research required. 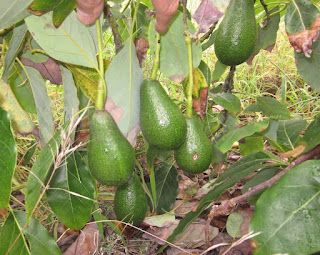 Avocados don’t ripen on the tree.  They “mature,” and then stay good for weeks or months on the tree.  But once the mature avocados are picked, they ripen within about four to eight days (and then start to go bad).

I have two trees — Fuerte and Hass.  The pear-shaped Fuerte were the first commercial variety, but they have thin skins and therefore do not ship well.  Hass avocados have thicker skins that tolerate being transported long distances, and so they are now the predominate commercial variety by far.  Hass are oval and have bumpy skins, and mature in the spring (more or less). 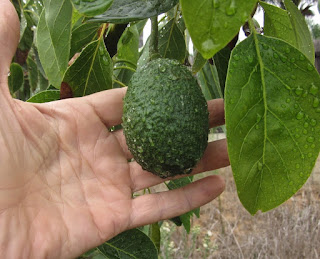 Many people think the Fuerte are a bit better to eat.  Fuerte mature mid-winter (this is southern California — 80˚ yesterday), so I’m starting with them.  And yes, good on a burger!  Or a salad . . . 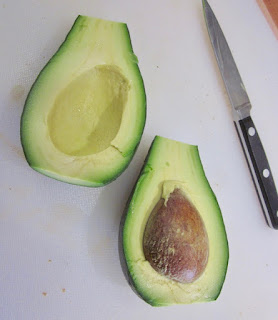 Now that I was off-stride, and perhaps enjoying the break, thoughts of visiting the dog beach intruded, so off we went.  (More fun than scraping old paint off overhead eves.) 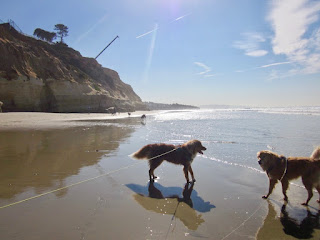 And while my mind was off its remodeling rails, I explored other interests.  I’ve been an electric vehicle (EV) enthusiast for more than ten years, waiting and waiting for the “perfect” EV that would last me for a long, long time.  It’s actually part of the same plan as the ideal house — pursuing harmony in my life.

I have had a reservation for a Tesla Model 3 for almost two years, and while that basic car is wonderful, it has features I would have trouble living with — for example, the glass roof (here in San Diego’s intense summer sun), which would not play nice with the dogs waiting in the car, even with windows open. 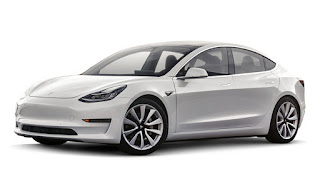 My reservation for a dual-motor Model 3 will not mature until the end of 2018, in any case, and there are no other EVs coming soon that check all my boxes.  So I decided I could buy an inexpensive, compromise, used EV as an interim car, so I wouldn’t have to keep driving my gasser.  My gas-burner is nice enough, but not nearly as nice a driving experience as an electric car (which also charges in my garage).

More time on the internet.  I discovered that 2014 BMW i3s, coming off lease, could be had for a relative pittance.  The i3 was an early favorite of mine, and is a really nice EV — comfortable, good performance, responsive, and the first mass-market car to be made of light-weight carbon fiber (plus some aluminum and thermo plastic body panels).  It should last forever.  But it was two-wheel drive and had some quirks that put it out of contention as a “permanent” EV.  The first generation had an 81-mile EPA range (sufficient for my driving), while new EVs generally go 125 to more than 300 miles on a charge.  The current i3 goes about 120 miles on a charge, and by the end of the year, due to advances in battery tech, the next iteration of the i3 will have a range about double the first generation (with a battery the same size and weight). 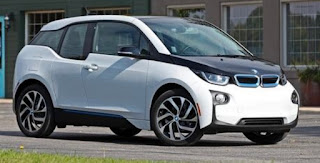 The internet led me to a 2014 i3 I liked, at a big Toyota dealership in the southern environs of Los Angeles.  Drove the 60 miles up there, and spent a few very unpleasant hours reminding myself how wretched car dealerships can be.  Ended up without the i3, and decided I could live with my internal combustion car for awhile longer.

Electric vehicles can use the magnetic forces in their motors to slow the car as easily as they accelerate it; these dual functions are controlled by the same pedal (it’s called single-pedal speed control).  This magnetic braking can replace conventional friction braking 90% of the time.  When slowing the car, the motor behaves like a generator and charges the battery, enhancing efficiency.

I’ve written a number of articles on electric cars, plus this 3-page tutorial for friends and relatives on EV single-pedal speed control (one of their best features) in case you’re interested.  There's also a link on the first page of this blog.

After the Model 3, Tesla is planning a Model Y crossover built on the same platform, but they have not yet revealed what it will look like.  If it’s not too much taller than the Model 3, and has a solid roof and a hatch, that would be ideal.  Yay!  But, big if.  Expectations are that Tesla will unveil a Model Y prototype sometime during the first half of 2018, and that it will go into production in 2019 (or maybe 2020).

Porsche is making a very impressive EV — now called the Mission E (not the final name) — that is set for production late-2019.  Camouflaged pre-production prototypes have been seen on German roads, and testing on the famous Nürburgring track.  I photoshopped away the camouflage in the picture below.  The AWD car checks all my boxes, and then some, but might be a little overkill for trips to the grocery store.  Sigh.

After that, it has been reported that Volkswagen is planning an “AEROe” small sporty sedan with a liftback hatch for 2023 production.  Long time to wait, but battery technology continues to make good improvements in energy density, all while battery prices are dropping.  EVs are inherently much simpler than gasoline engine cars, require much less maintenance, and cost much less to operate.  Before too many years, they will also cost less to buy than combustion cars.

But back to the house remodel.

Working on drawers at a relaxed pace.  Mostly more drawers for the waterbed base, but I also built the first kitchen drawer.  It’s one of the high side-loading drawers, and I’m happy with it (and looking forward to getting more of the 60+ kitchen drawers made).  It’s not surprising that most kitchens have doors on most of their cabinet storage spaces, because drawers are complicated to build, and while cheap drawer slides are often used, I’m paying about $17-$18 per pair for good quality full-extension drawer slides.  Soft-closing slides are significantly more.

Photos of the kitchen drawer-shelf, closed and open: 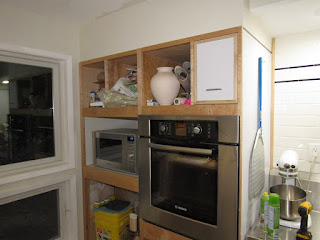 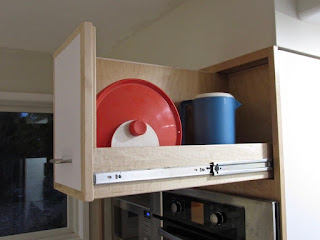 And the pottery studio cabinets?  Amazon initially told me the drawer slides I ordered for them would be delayed for a month, but just today said I would get them in a week, so hopefully the next post . . .

Posted by Chris Llana at 7:23 PM No comments: