No, not the name of a new band.

Sophie is my new dog, here for one week now, and really nice! 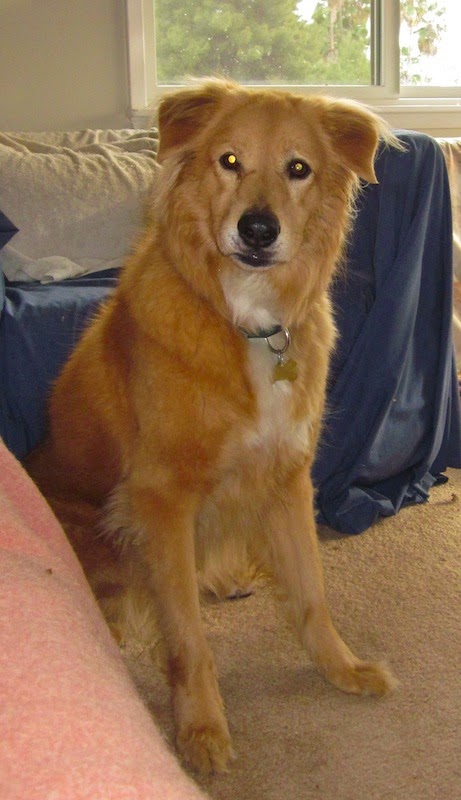 She's 8-years-old, about 50 pounds, and from the Southern California Golden Retriever Rescue (a fantastic organization!).  It's actually the second time she's been rescued.  She was about six months old (plus or minus) when found hiding under a car, trembling.  Terrified.  The woman who adopted her named her "Daisy" and expected the abused puppy to be a perfectly adjusted dog out of the box, and wasn't happy when that was not the case.  Some TLC required, obviously, but something the woman was not prepared to deliver.  She even wrote a letter to the Dog Whisperer, thinking the poor pup could go on TV and get fixed up.  If she had paid attention to the cases presented by Cesar Millan, she would have learned that his training was to correct the problems caused by the owners.  :-)

Then she hired a professional trainer to teach Daisy tricks; Daisy was smart and learned a lot, but really, how can anyone make a connection with their own dog unless they do their own training/education.

Sophie barks at strangers when they come to the house.  Not like my rescued German Shepherd Jade used to do; Sophie barks because she is afraid of strangers (something that happens when dogs are abused).  I've been taking Sophie to the local nature preserve every morning where she meets lots of new dogs (she likes that), and lots of new people.  I also take her to Home Depot (they welcome dogs) and PetSmart.  Sophie is already showing some improvement with her fear.

And then there's my five cats.  Sophie reportedly had lived with a rabbit, which we all thought would be a good stand-in for a cat.  Well, not really.  She's making great progress, and three of the cats are becoming tolerant.  The other two are making baby steps.  Stay tuned for updates.  In this photo, there are three cats in the background in the corner—look for them! 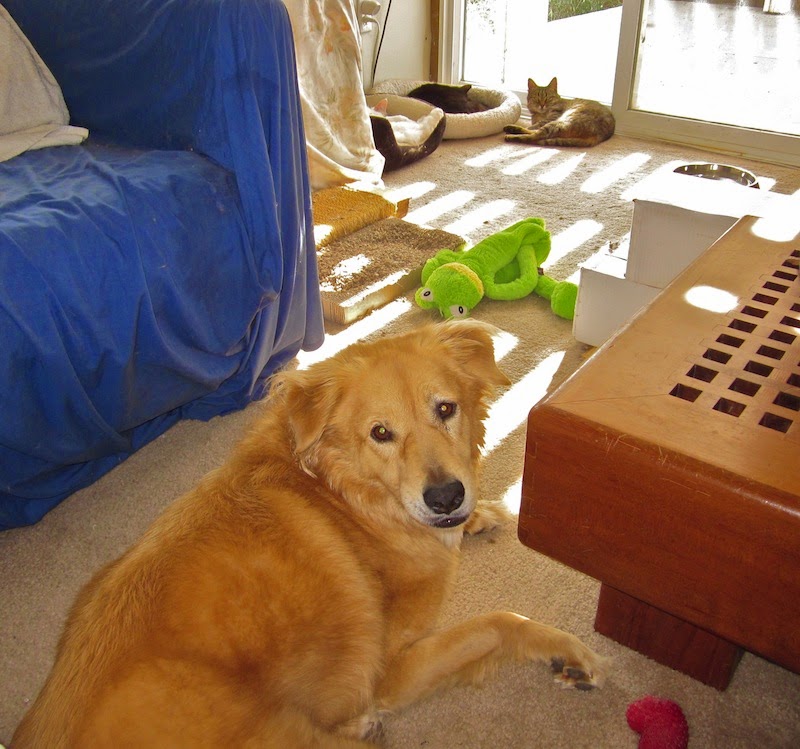 All the time with the new dog has slowed house progress, that and the lack of $400 worth of PEX plumbing supplies (coming in two days).  The new hinges arrived today, so I did get the doors installed on the pottery studio sink cabinet (those Doors).  I made the doors some days ago—3/4" plywood with birch trim.

European hinges are double jointed; they don't just swing out.  They move the door around as they swing, so the doors don't bind with adjoining structure.  They have a cup that is recessed into the door; part of the hinge folds into the cup when the door is closed.  That requires a 35 mm diameter hole (1 3/8"), drilled into the door with a Forstner bit (a very cool bit that leaves the wall of the hole very smooth, with a flat bottom).  Oh, and this operation really requires a drill press (a power tool everyone should have). 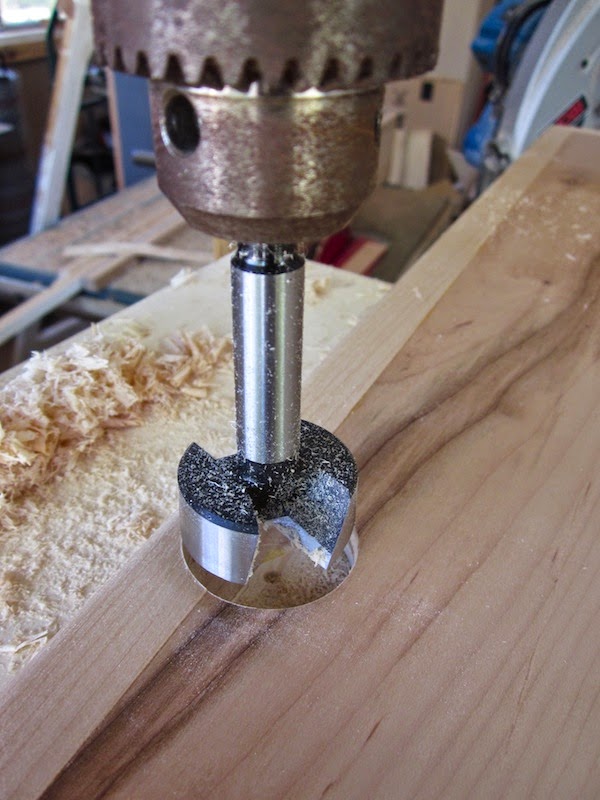 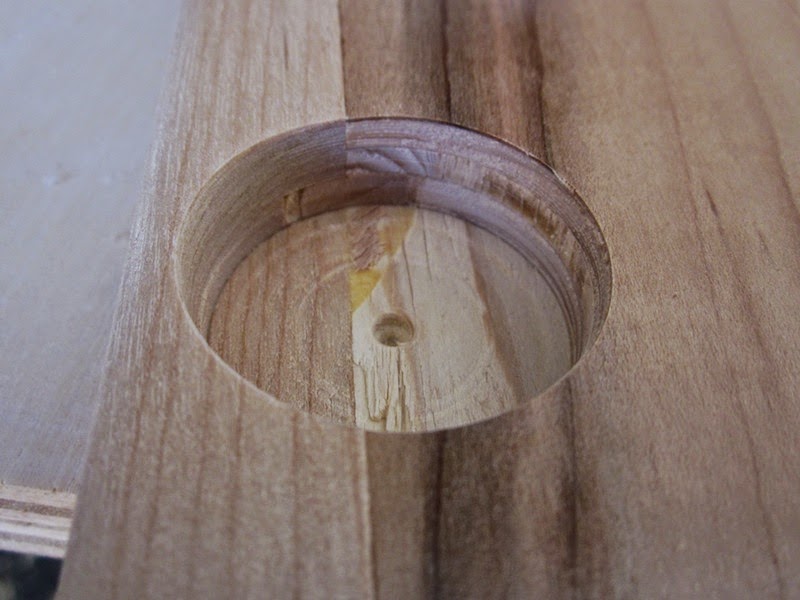 The hinge comes in two parts; the bigger part fits into the hole and is attached with two screws. 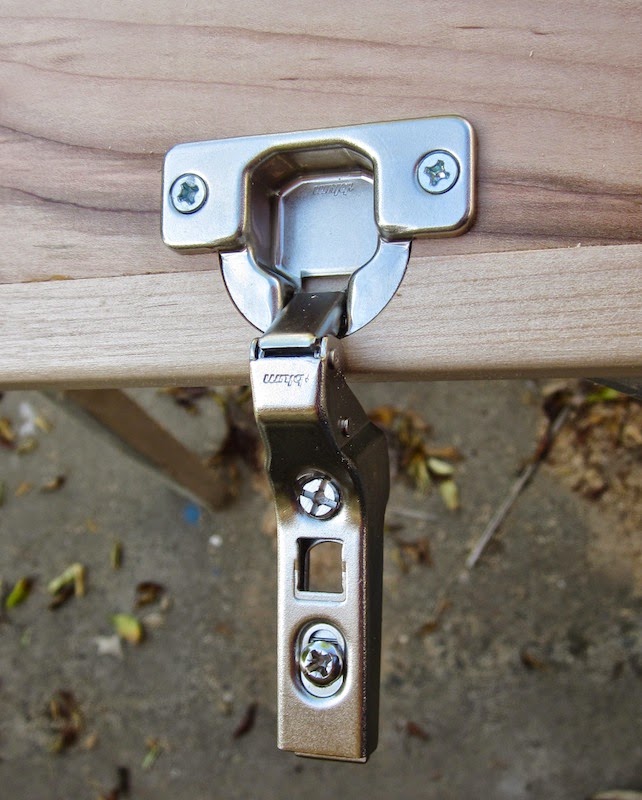 A base plate is attached to the inside of the cabinet with two screws. 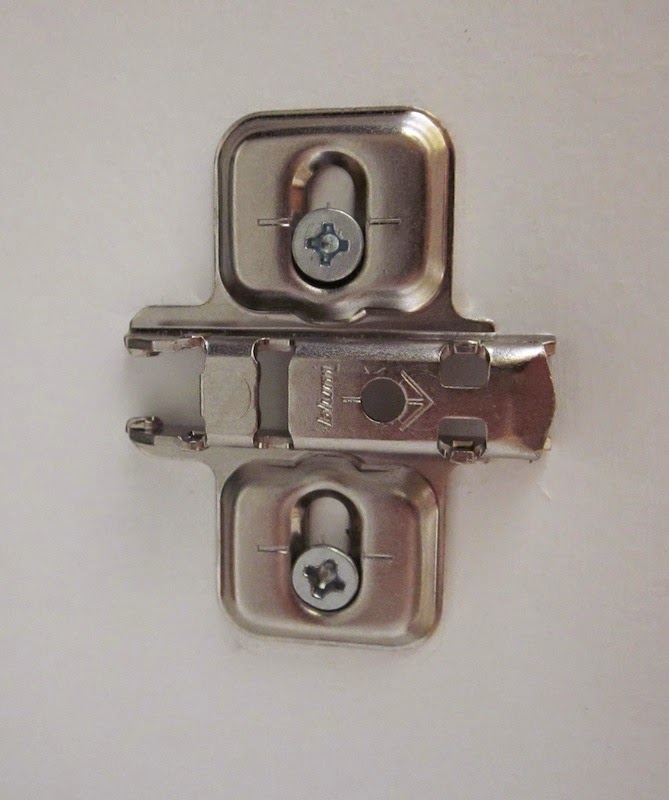 The hinge latches onto the base plate, and together are adjustable in three dimensions: up/down, left/right, and in/out.  This is particularly useful for inset doors for making the clearances even. 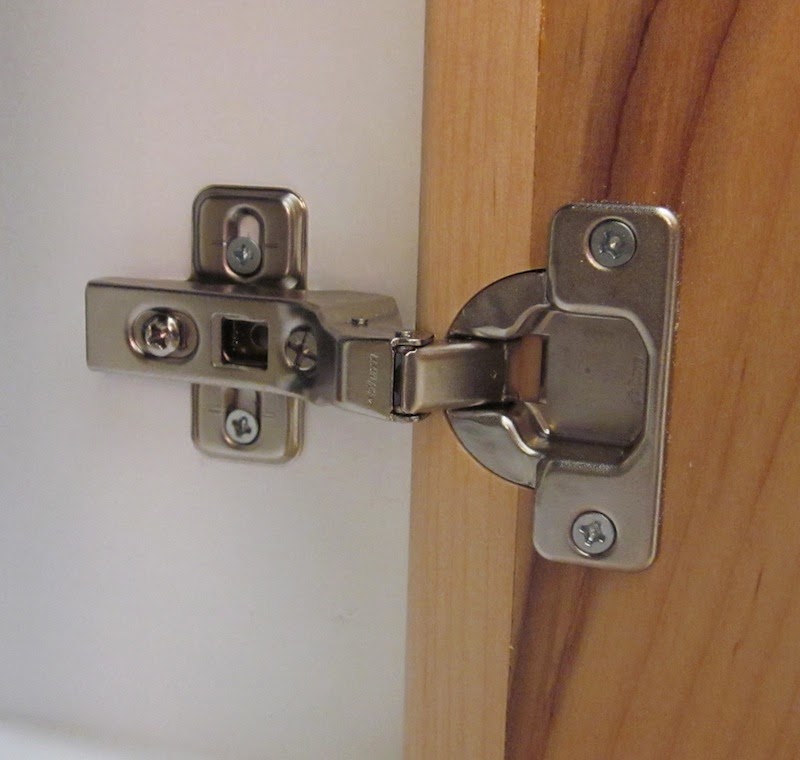 So, four hinges installed and adjusted, and two pulls added to the doors.  The cabinet is finished (well, the base will be covered when the new tile floor goes down). 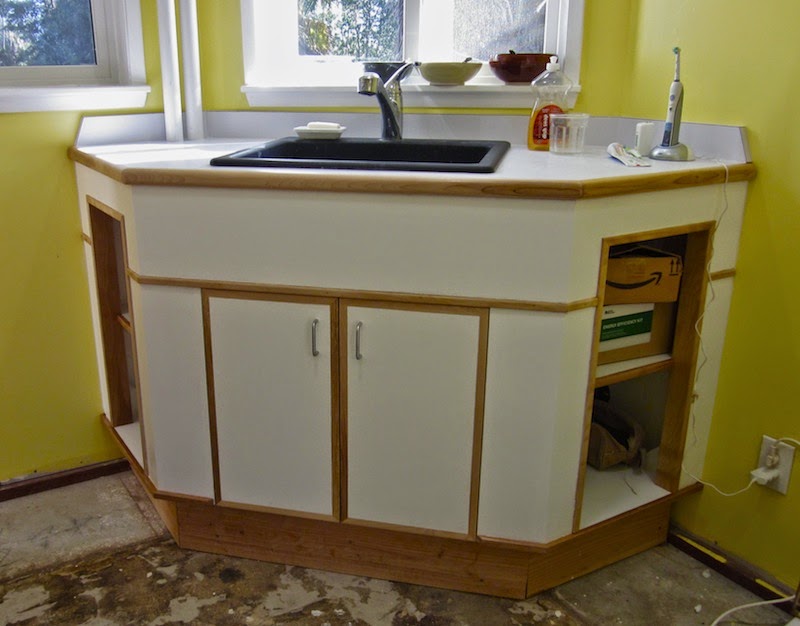 Next, pex water supply lines go in the wall in the new kitchen.  Drywall goes on.  Then joint compound, paint, etc.
Posted by Chris Llana at 9:06 PM No comments:

So mostly I've been working on the new pottery studio sink cabinet, and finally moving the only sink in the house from its temporary location in the new kitchen, to the pottery studio.  I also ordered the new commercial stainless steel counter top for the kitchen (from the most respectable internet kitchen supply company I could find), but a few days after charging my credit card, they informed me the shipment had been "unexpectedly" delayed (for a month!).  They hope it will finally go out by March 25.  We'll see.

I also ordered the plastic laminate for the cabinet top from Home Depot—that came promptly.  I used contact cement to glue the laminate on 3/4" plywood, cut slightly larger than the actual top, and fastened it to the structural 3/4" plywood cabinet top.  So, the top is 1.5" thick! 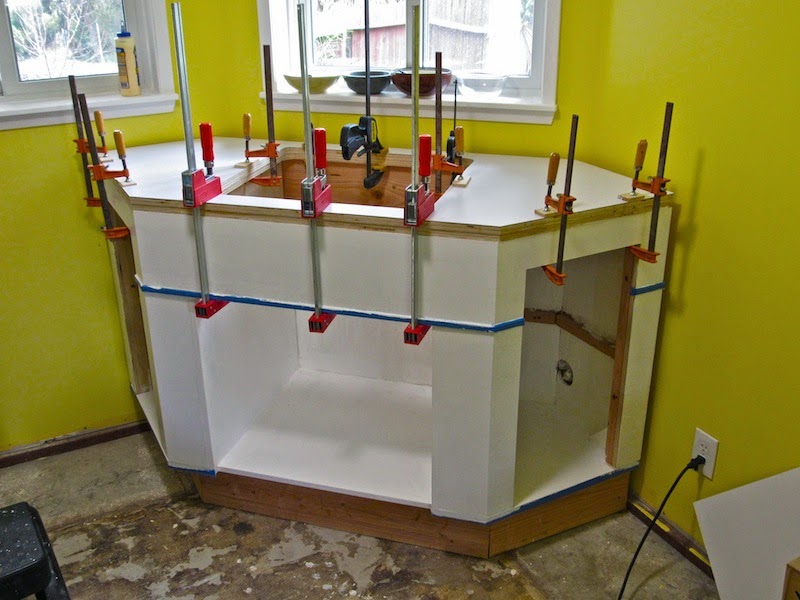 Birch trim will cover the edge of the top, so the two layers have to be perfectly flush.  Impossible to cut and fit them perfectly for that—hence I made the top layer a little large, and then trimmed it with a bottom-bearing flush cutting router bit (I used one of my larger routers and a bit with a 1/2" shaft). 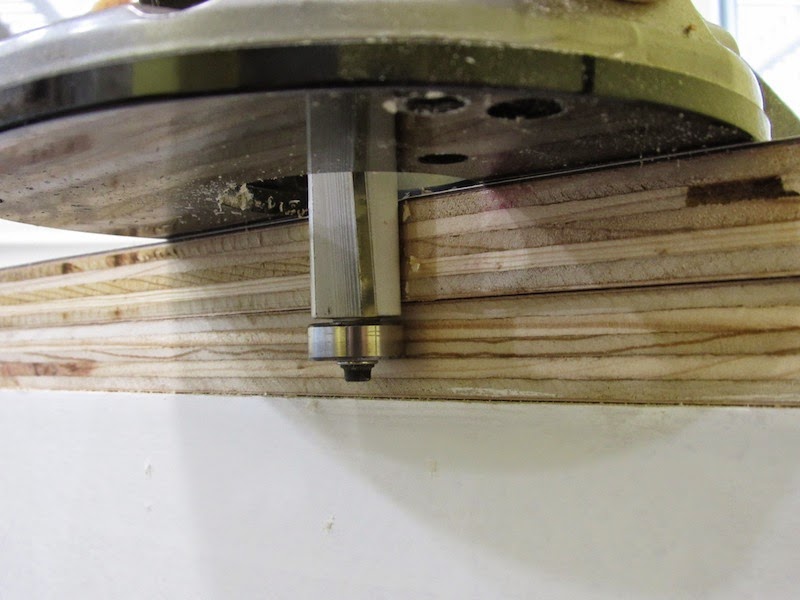 Then the birch trim went on (after using the router to create a rounded-over profile). 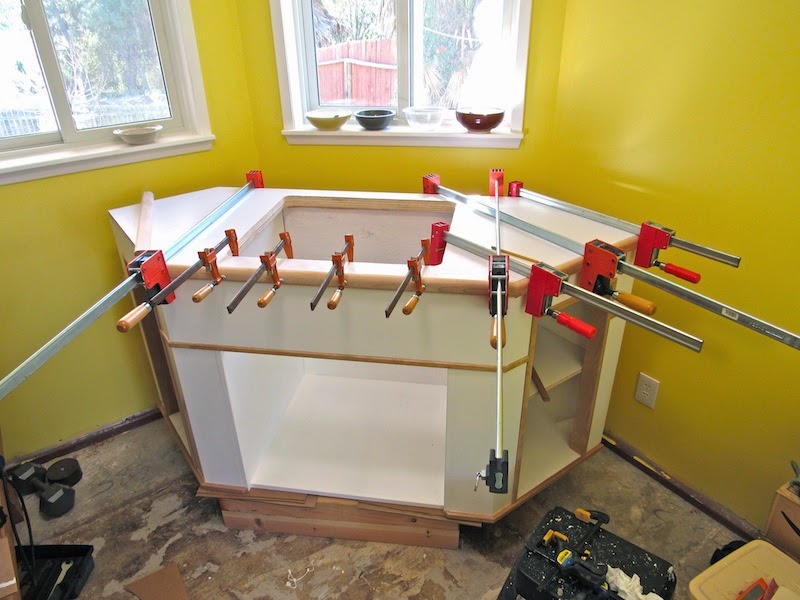 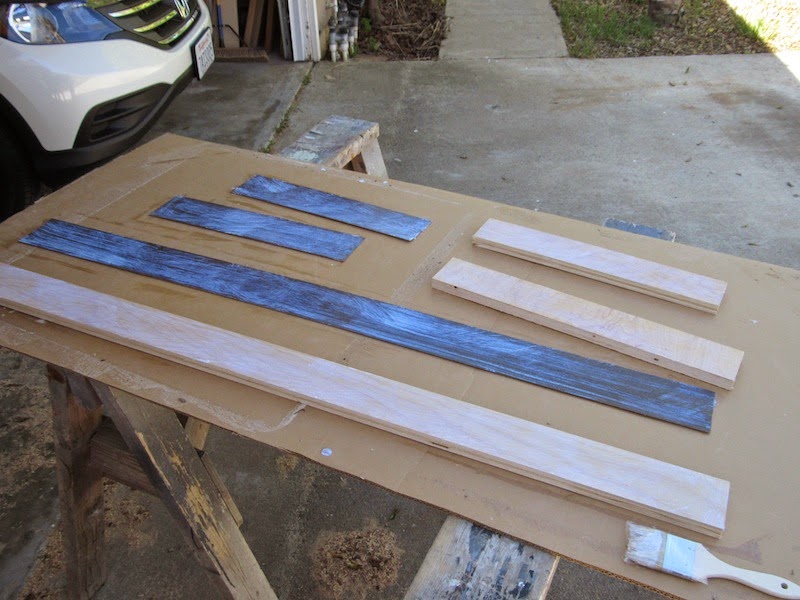 Then you apply the laminate onto the plywood, making sure the laminate is positioned such that there is a little overlap all around.  You can't let the two touch until they are aligned, because they stick on contact.  If you inadvertently let them touch before they are lined up, you'll have to start over.  So for larger pieces (the counter top), the normal practice is to place wooden dowels on top of the plywood, and then lay the laminate on top of the dowels and slide it into position.  Then withdraw the middle dowel and press the laminate against the plywood, working from inside out to prevent entrapped air bubbles.  Use a roller to apply pressure.  Keep withdrawing dowels and rolling, working out toward the ends.  While you can skip the dowels with smaller pieces (such as the backsplash face and edges), I used dowels to illustrate how I did the large countertop. 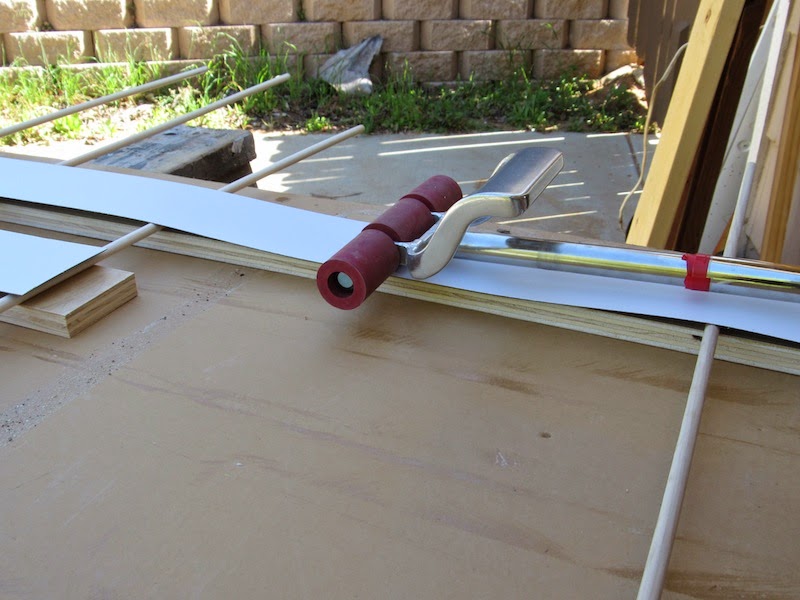 Once you have the plastic laminate glued to the plywood, you need to trim off the excess laminate, using—surprise!—a laminate trimmer.  That's basically a small high-speed router. 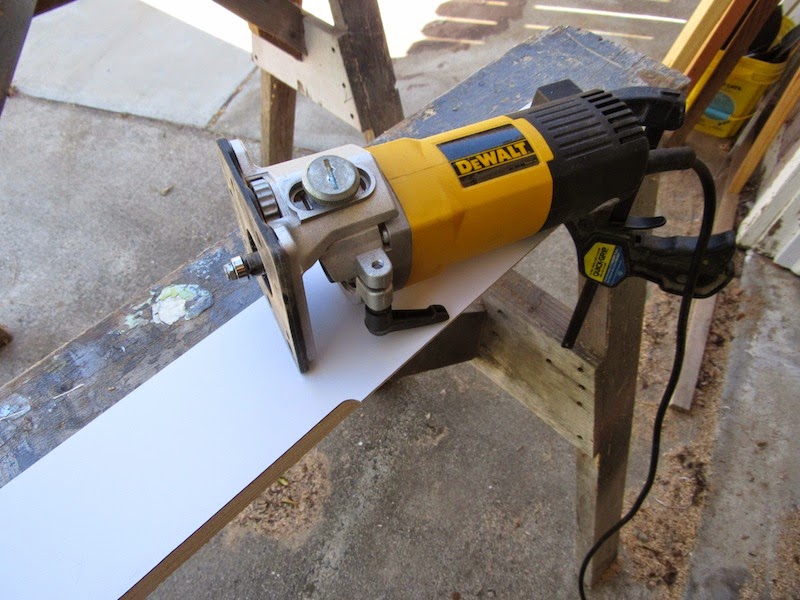 I'm running the PEX water supply lines through the attic, just above the ceiling drywall and covered by at least 10" of insulation.  I decided to run them down from the ceiling to the sink cabinet through 1.5" PVC pipes through which I pulled pipe insulation. 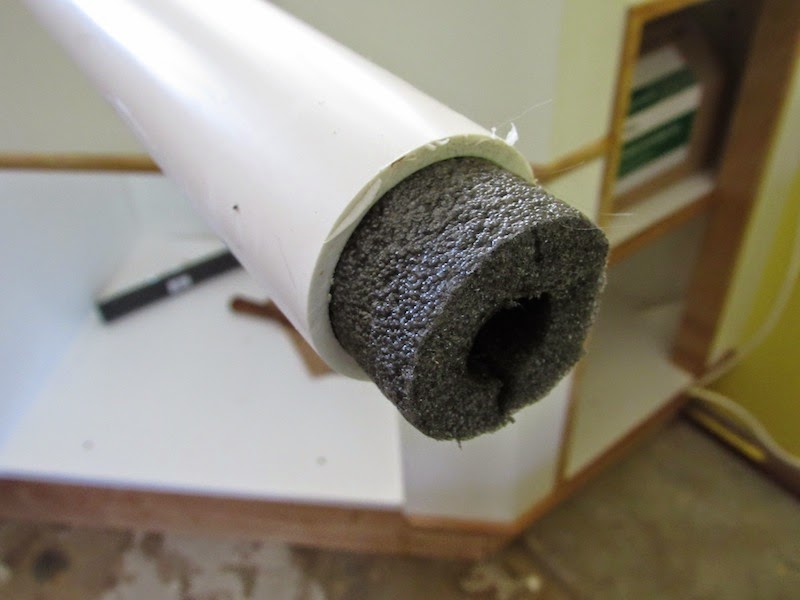 Once the supply lines were inside the sink cabinet, I attached stop valves to them underneath the sink (where the lines from the faucet would attach).  I use ProPEX (made by Uponor) fittings, requiring a special tool to expand the PEX.  You attach other fittings (elbows, tees, connectors, manifolds, etc.) the same way.


The drain pipe was assembled from 1.5" ABS, with a PVC trap assembly. 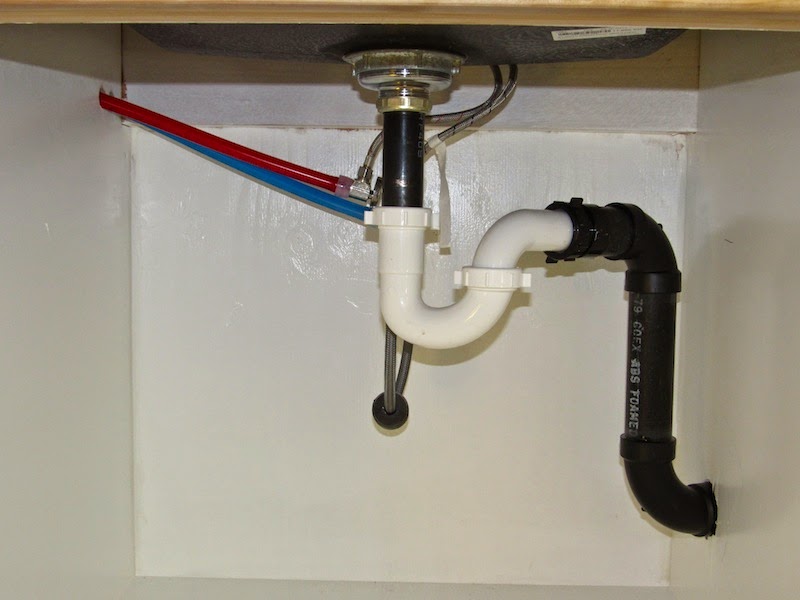 Here is the sink cabinet, mostly done.  I'm still working on the doors for the front opening (white with birch trim).  It's now operational, with no leaks.  Hooray! 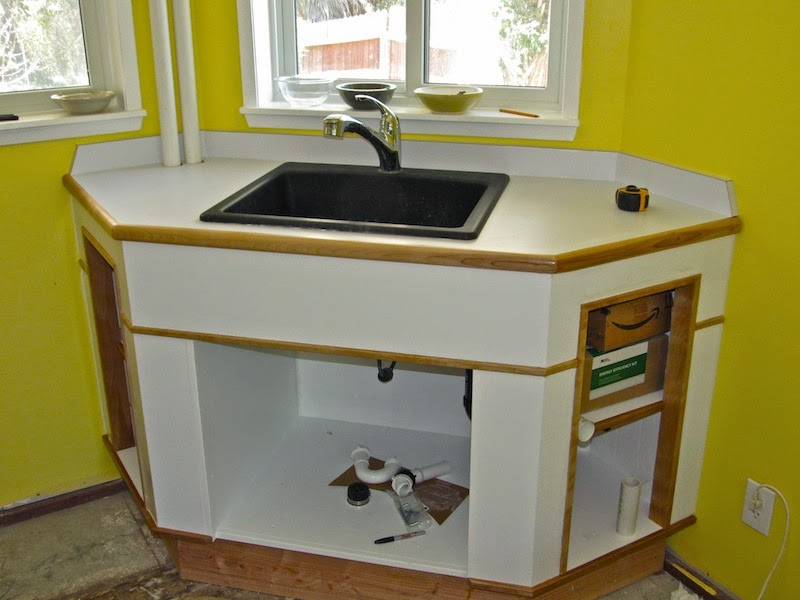 Work now shifts to the kitchen and the master bathroom.  Oh, and a new four-legged family member arrives in a couple of days (of the canine persuasion).
Posted by Chris Llana at 4:49 PM 1 comment: