It was a big revelation when I learned that waterbeds were invented in the 19th century by a Scottish doctor to treat bedsore patients.  Bedsores (also called compression sores) are no joke.  They can quickly develop into open wounds that go down to the bone.  They can lead to very serious consequences if not treated properly, and even when treated diligently, they take a very long time to heal (often because the patients are elderly and infirm, with weak immune systems).

Waterbeds were useful in treating bedsores because they distribute support for the body evenly.  I took care of my parents during the last few years of their lives.  My father had Parkinson's disease, was confined to a wheelchair, and when he was in bed, was unable to shift positions.  He developed a bedsore at a point where his spine impinged on a too-hard bed.  Although we caught it quickly, and treated it by keeping him rolled to the side when he slept, and applying special gel bandages, it took a year to heal.

I wanted to get him a waterbed to resolve any future pressure sore issues, but he was of a generation that associated waterbeds with hippies, so he steadfastly refused.  Got him a cushy pillowtop mattress instead.

Anyway, the modern waterbed was developed and commercialized by three San Francisco State University students over a period of several years, circa 1970.  By 1987, 22% of all beds sold were waterbeds.  Today, with advances in more conventional mattresses (memory foam, "sleep number," etc.), waterbeds make up less than 5% of beds.

Early waterbeds had simple mattress-shaped vinyl bladders contained by a wood frame.  When you moved, you made waves.  I had one of those starting in the mid-1970s, and used it for about five years.  That type of waterbed came to be called "hardside."

Hardside waterbeds are now available with varying amounts of fiberfill batting inside the mattress, which dampens the movement of water, reducing the waves.  You can buy one with as much or as little damping as you like.  That is the kind I now have; it has a medium amount of damping — just enough movement of the water to know you're on a waterbed, but no waves.

Hardside waterbeds do not come in "standard" bed sizes.  The widths are the same, but the lengths are all 84".  Twins, Queens, and Kings are all 84" long, and all prefixed by "California."  So if you're tall and have a twin-size waterbed, your feet don't hang over the end, like they would with a regular twin bed.  My Queen-sized waterbed size is called "California Queen" — it's 60" wide by 84" long.

There are now more modern waterbeds called "softside."  Instead of hard wood sides, their water bladders are surrounded by firm foam (although certainly a lot softer than wood).  The water bladder and foam edges are held together in a big fabric envelope or case.  These softside waterbeds come in standard sizes, sit on platforms, and use standard fitted sheets.  They're also damped, so no waves.  More like a regular bed, except with more even support.

The more even support is not only great for preventing bedsores, but it also eliminates cutoff circulation (pressure on a blood vessel), so no tingling or numbness.

And the water in waterbeds is heated.  That improves circulation, and any healing that may be needed.  And best of all, on those cold winter nights, no sticking your legs down between cold sheets!

But back to the construction of my waterbed base.

In Part 2, the lower (drawer) part of the base was complete, and the outer sides of upper section were attached.  The next step was to screw sleepers (or stringers) to the top of the drawers sections to allow for the installation of 1" of rigid foam insulation (to keep the heat in). 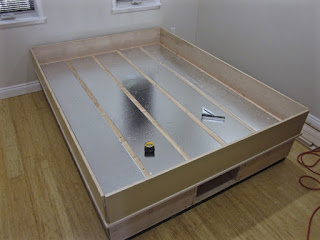 Next, another layer of 3/4" plywood was added.  This would support the waterbed mattress. 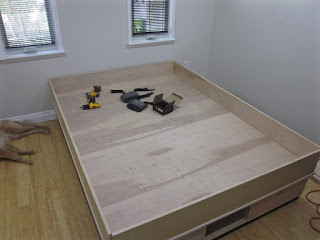 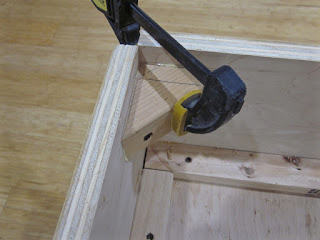 Then the upper spacers were glued to the outer sides. 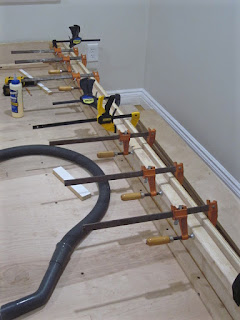 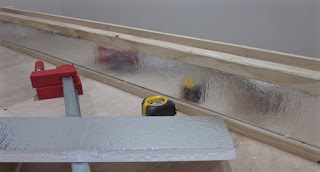 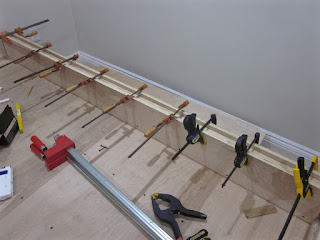 And while I could have left this detail out, I added a wood fillet for a more accommodating edge for the waterbed mattress (doesn't have to squeeze into a sharp corner). 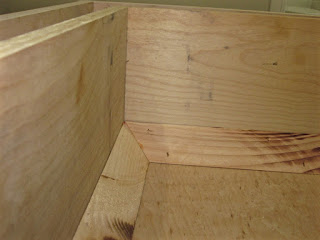 At this stage, I coating all the interior surfaces with epoxy to make it waterproof, even though there is a waterproof liner that goes outside the mattress.  And then the 3.5" wide maple tops are attached to the top of the sides.  This trim is what I will be sitting on, getting in and out of bed. 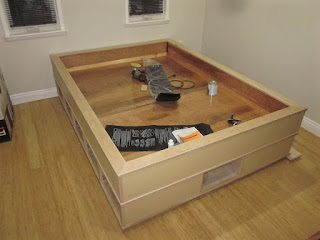 Before the liner and the mattress go in, the 300-watt heating pad is positioned, as is the temperature sensor (thermocouple), which both connect to the heater control (thermostat). 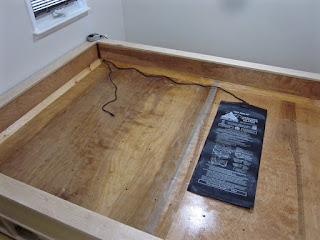 Then the liner and mattress go in and a garden hose used to fill the mattress with about 1500 pounds of water (using a special adapter). 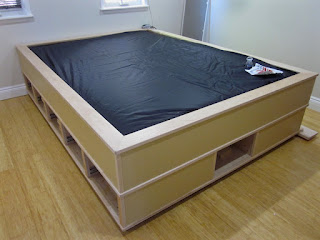 And of course, I still have to build the drawers, and attach some maple trim to the far side.  I still need a suitable mattress pad and California Queen size sheets before it goes operational, but for now I need to move on to other things.

Other things being — concrete work for the six-foot garage extension and for the new covered front porch.  One of my neighbors does beautiful concrete work, and he will be between jobs in a few weeks so I need to do all the prep work for that:  hiring someone to cut and remove part of driveway, then digging for footings, and building foundation wall forms, etc.

The kitchen countertop and pottery studio cabinets will have to wait.  Sigh.

Posted by Chris Llana at 8:49 PM No comments: