The last couple of weeks have been extremely frustrating—almost infuriating.  But the issues never go away by themselves, so I've been the tortoise, slowly plugging away at the problems.

Early on, I decided to install a urinal in my bathroom, next to the toilet.  Apparently this is a rare thing for a residential bathroom, even though every public and business men's room in the country has a row of them, and I've never seen a man who will pass up an available urinal to pee in one of the toilets (in a stall).  The one I bought (Kohler) uses just a half-gallon of water per flush (and I read there are new regulations mandating just half-liter flushes for urinals).  Easier to keep clean, and certainly the toilet stays a lot cleaner if there is a urinal to use.

But urinals in residences seem to be a taboo—like they don't even exist.  I got mine from Home Depot (on line, not in a store), and there were reviews from others who had them in their houses, so I'm not alone.  Home Depot (.com) also sells bidets, and while those are common in Europe and elsewhere in the world, not in the U.S.  Another taboo.  The Home Depot description for its Kohler bidet included this:  "Horizontal spray flows over the rim for localized cleansing of the body and aids in relief of certain health conditions".  Ah, euphemisms.  Wouldn't want children to figure out what a bidet is for! :-)

But I digress.  I was taking about frustrations.  With the millions of urinals installed in the country, you would think the installation process would be all sorted out and clear to someone new to the subject.  But no.  The absurdly abbreviated written instructions that came with the urinal and the separate flush valve were essentially useless.  Worse than useless, because they gave dimensions and data that did not match the hardware.  It would have been more honest to just say figure it out for yourself.  I looked on YouTube—which has instructions for doing anything, but not installing a urinal.  There were instructions on replacing a urinal, but that did not demystify the plumbing behind the wall.

So ultimately, I got out all the parts and put everything together sideways on a table and figured out the correct measurements, and then figured out how to hang it on the wall (and still hoping it will work).

Early on, I talked to Kohler tech support about the required water supply, but they mentioned only water pressure and the size of the water line.  Half-inch PEX was too small; 3/4" would be good—I planned on using a full 1".  I had plenty of pressure, but a couple of days ago I reread the instructions (in fine print) for the flush valve, and even looked at the troubleshooting section, where it was revealed that you needed a water supply that kicked out a 35 gallon-per-minute flow rate.  Whoosh!  A couple of weeks ago, while I was researching water softeners, I noted that the model I was eyeing provided just ten gallons per minute (water running through a tank of ionizing resin beads tends to drag).  So instead of using soft water to feed the urinal, I would connect the supply line upstream from the water softener.  But yet another surprise.

Back to this post, and the pictures!  Starting with something easy—the vanity.  First, I installed the base, and routed the drain pipe and supply lines.  I also installed some insulation in the base, because the concrete below the vanity is the same concrete that forms the base of the outside of the house, and so is the same temperature as the outside.  To wit: 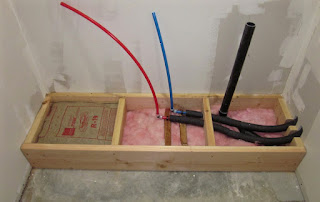 Next I started to build the vanity carcass, using biscuits and tongue-and-groove, but then discovered I had run out of half-inch plywood for the back.  That will come next time I summon a truck delivery from Home Depot, but in the meantime, I assembled what I had (but no glue or screws yet) and have been using it as a workbench.  I've since cut out the horizontal partitions, but not yet cut the biscuit slots for those. 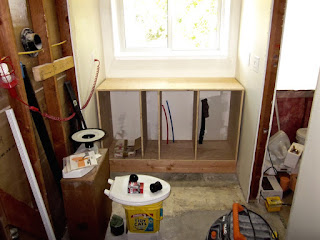 You can see that I put a dummy toilet in place to see how the space would feel, and it works just fine.  I also finished putting up the cement backer board in the shower, painted the ceiling, and installed the overhead shower light to illuminate future work.  The shower gets a waterproof membrane applied over the cement backer board; the tile goes over that. 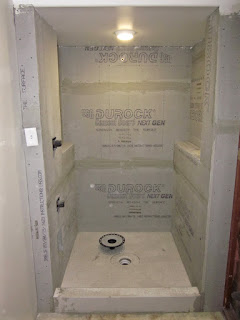 The next photo shows where most of my frustrations have been centered.  After I had determined the position of the urinal output pipe (in three dimensions), and figured out how to accomplish that installation, I changed directions and did the black vent pipe. 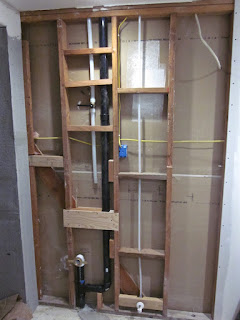 It went up through the roof, although not without a couple of hiccups. 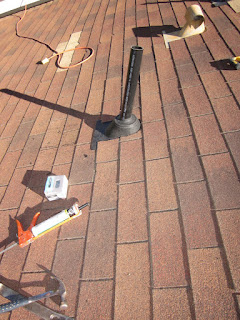 One of the challenges was figuring out how to position the urinal outflow pipe as far into the wall as needed.  Conventional ABS fittings that were available at Home Depot would not work (they stuck out too far, either elbows or tees, with a separate threaded fitting).  I finally found a 2" threaded PVC (white) elbow online—SupplyHouse.com, and used a special cement that would bond PVC to the black ABS pipe. 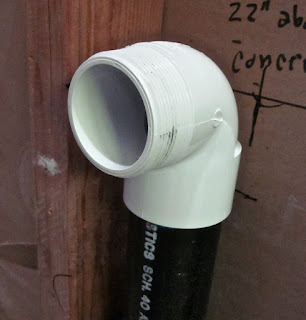 A brass attachment fitting that came with the urinal screws onto this PVC threaded elbow, and two bolts hold the urinal against this pipe.  Watertight integrity is provided by a thick rubber washer. 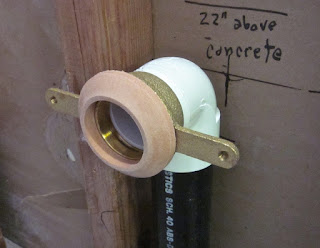 The weight of the urinal is supported by a crosspiece attached to the studs.  A simple 2x6 would have done the trick, except for the 2" vent pipe occupying the same stud bay, so I had to fabricate something solid from six pieces of wood (shown in the photo of the plumbing wall).  The 1" PEX supply line for the flush valve runs down from the attic to the left of the black vent pipe; in the photo the hefty shut-off valve has been inserted into the line.  I can't actually connect the PEX supply line to the flush valve until the urinal is in place (because the precise positioning is still uncertain, and because this particular tight-quarters PEX connection needed special treatment).  I will therefore have to install the cement backer board on the lower half of the wall (up to where the flush valve is located), and tile that portion, then install the urinal, then connect the supply line, then cover and tile the top half of the wall.  Sigh.

Further to the right on the wall, you can see the half-inch PEX supply line running down from the attic for the toilet.  Easy peasy, that.

Frustration, part 2.  Tile.  Lots of different types of tile in the bathroom, but all needing to be pretty much the same shade of white.  Home Depot has a coordinated family of white tile—different sizes and shapes, trim, etc.  But no base cove tile—the lowest row of wall tile that butts against the floor, that curves around to meet the floor with a nice fillet.  Lowe's has those pieces, but a different brand.  Looking for matches.  For next time.

I also now have the pieces for the pottery studio's built-in stereo (from automotive components).  Maybe I'll also start on that.  Sigh.