My goodness!  I just discovered that my last post was over a month ago; I like to post twice a month, but the hallway has been a bear.

If you recall, tearing up the tile in the hallway left a lot of tenacious areas of mortar stuck to the concrete floor.  And at the far end, which had originally been part of the garage, I discovered that the concrete slab was especially torn up (like a little mountain range, much of it a half-inch too low, along with some peaks too high).

At the end of the last post, I had erected a plastic "tent" to contain the clouds of dust produced by my diamond grinder, with the hopes of sending the dust down the hall to the air handler to be filtered. 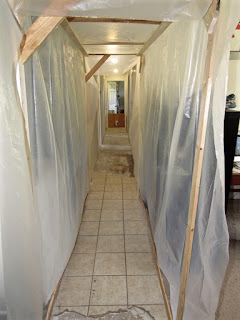 Didn't work,  so I found a shroud on amazon that clamped around the grinding cup and connected to my shop vacuum.  Had to wait a week or so before that came.  In the interim, I went up and down the hall attacking small bits of the excess mortar with a cold chisel and hammer.  Did that a number of times over the weeks.  The shroud came and looked like this from the top and from the bottom: 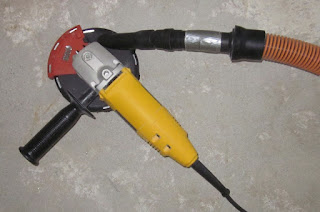 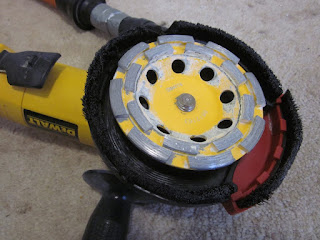 It initially did not fit my grinder (had to use a hack saw and file), and vacuum hose did not fit either (used duct tape and small wood splints).  The rubber hose adapter also would pull out as I moved the grinder around (with predictable consequences), so I held the grinder with one hand and held the hose in place with the other.  I would not want to use it that way regularly, but for this one job, it was manageable, and it did substantially reduce the amount of dust escaping into the house.

I went down the hall and ground off the offending blobs of mortar, and then went back with a straight edge checking for flatness.  The slab was mostly flat, but there were a couple of areas with high areas.  I marked those places with a Sharpie, and then went back over those with my grinder. 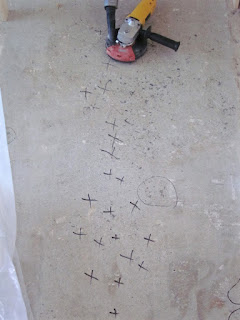 Then repeated this process again (and again).  Not a lot of fun, and the weather was great outside, so on one grocery store run, I made a small detour to the dog beach.  (the big perk of living in Southern California — 82˚ that early March day at my house, upper 60s at the beach). 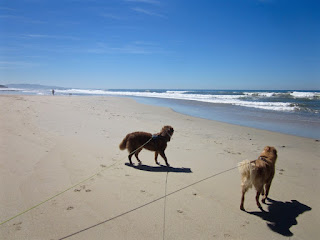 And then back to the grind (literally).

For the low rough area at the end of the hallway, I mixed some floor leveler.  I didn't measure the amount, and just added water until the viscosity seemed right (I had used it in the laundry room), and poured the bucket of leveler into the low area.  Pretty reckless of me.  Then used a 24" float to spread it out, and it leveled itself, and amazingly, it almost exactly came up to the right level.  There was just one part (under the 2x4, where I did not "help" it to level) that ended up slightly high.  I ground that down.  Pure luck it didn't turn out to be a disaster. 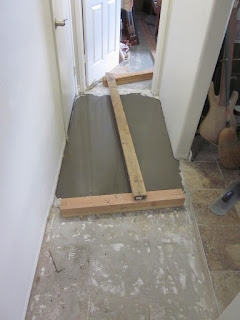 I made one last check of the floor's flatness, using my fingers to feel for bumps and the cold chisel and hammer to remove any small bumps.  Then came the underlayment — a 2 millimeter thick insulation/cushion/moisture barrier.  The work of fitting the bamboo planks along the edge of the hallway was very fussy and time consuming.  That was not too critical along the walls where the edge would be covered by baseboard, but it took time to match the edge of the bamboo with the tile areas (foyer, kitchen, and laundry room).  I used a clear silicone to secure the bamboo to the aluminum tile edging. 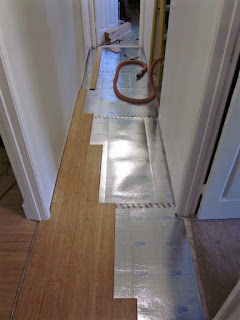 The planks in the whole middle area of the hallway went down very quickly.  At the doorway to the bedroom, which already had bamboo installed, I used a special bamboo transition piece, here shown upside down: 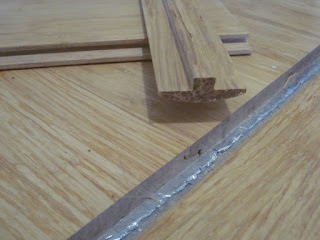 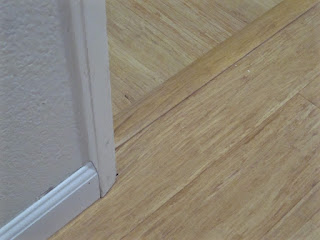 The next photo shows what the installation looks like at the kitchen entrance.  The baseboard has been installed but not caulked yet, and nail holes not yet filled, nor paint touched up.  (Need to move on to something else for awhile before coming back to the final details.) 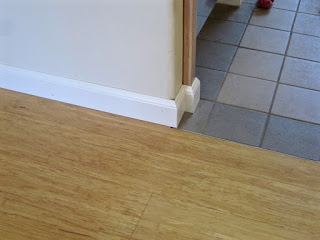 The last photo looking down the completed hallway: 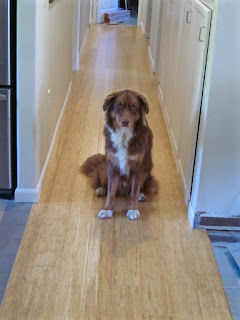 Thinking about the waterbed base or the kitchen countertop next, or maybe some work outside . . .
Posted by Chris Llana at 7:04 PM No comments: