I had thought this post would be on the new porch roof, but the weather has been hot, so I spent more time inside working on the first test batch of pots (actually they are all bowls of various descriptions).  As I write this, the kiln is almost cool enough to open to reveal the final product.  It’s always a surprise since I layer glazes, and it’s impossible to predict how they will combine.  The glazes were brushed on, so the thickness is variable, and that has a lot to do how the glazes mature.  And it's a new kiln, so I can't predict how the heat will compare to the results from the commercial firing services I've used in the past.

First of all, this post will describe the steps in making a pot, but will not attempt to offer instruction on how to do it.  There are much more accomplished potters who have lots of youtube videos online.  The best I’ve found are by Tim See in upstate New York.

He has recently updated a beginner instruction video which is excellent!  18 minutes long and well worth it.  The instructor in my first pottery course taught centering by demonstrating it, without any explanation.  She put her hands over the lump of clay, seemed to hold it there for half a minute, then pulled her hands off the now-centered clay and that was it.  I spent the whole course not being able to center clay.  This is MUCH better: 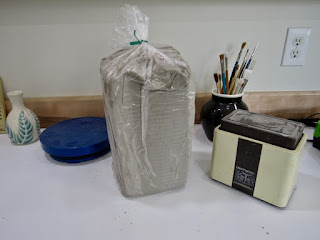 Start by forming a ball an putting it on the wheel-head, usually on a disc called a “bat.” 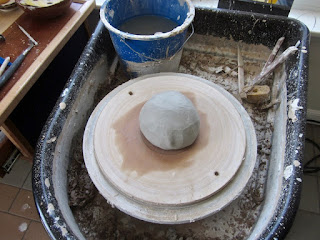 It’s been seven years since I last did any serious “throwing” of pots (that is, forming a pot on a pottery wheel), so it took some time to regain my muscle-memory and technique.  So there were a few flops: 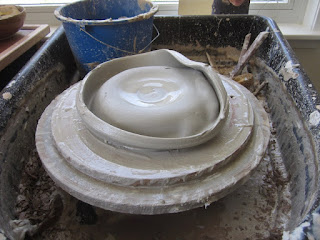 I was also reminded that if the wheel spins too fast and you're using a soft clay, the sides will be thrown out into a flying saucer shape 😦  That will go into the recycle bin.  Even though it has dried, as long as it hasn't been fired, it will revert to soft clay if water is added. 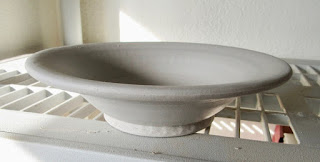 I made ten bowls, using two different types of clay: a very stiff stoneware clay called Moroccan Sand, and a soft porcelain/stoneware mix.   I will feature one of the bowls, step by step.  This is the one — a cereal or soup bowl — with the “throwing” complete. 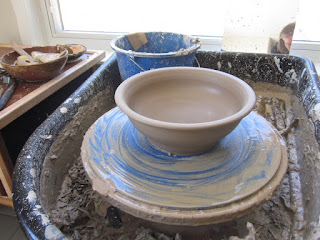 When that is done, the piece is generally covered loosely with a plastic bag (so it dries more evenly) and left to dry until it is “leather hard.”  At this stage it is ready to be trimmed. 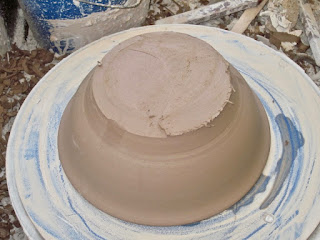 As you can see, the bottom is quite rough (unfinished) and too thick.  The lower part of the pot has to be left a little thick so that it supports the weight of the wet clay without collapsing.  But once it is partially dry, it can be thinned with clay cutting tools as the wheel spins (like a lathe). 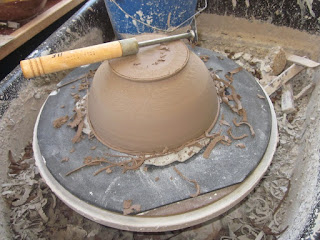 This is the bottom of the feature piece trimmed, with a foot/base shaped.  Looks better, huh. 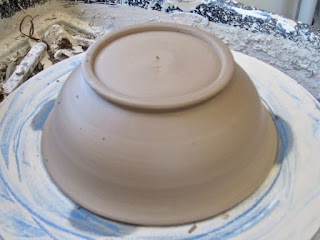 After trimming, the pots are left to completely dry before they get the first ("bisque") firing.  If they're put in the kiln while still somewhat wet, they will explode as the steam seeks to escape.  Not good.  The bisque firing chemically converts the clay to a ceramic; the clay shrinks and becomes much harder and stronger.

Loaded into the kiln for bisque firing: 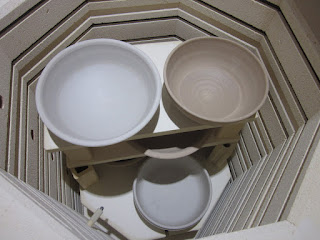 The bisque firing took almost 36 hours, from start to maximum temperature, and then the slow cooling.  The temperature ramp (heating and then cooling back to ambient) is slower than the final firing.  I started the firing late afternoon, so by the time the kiln started to throw off a lot of heat, it was night and cooler outside.  I ran the ceiling exhaust fan all night, left a window in the studio open, and closed the door to the rest of the house.

When the pots are out of the kiln, they are ready for the application of glaze (various chemicals in a water solution, that when heated hot enough become glass).  In a commercial studio or school, glaze is in five-gallon buckets and the pots can be dipped.  It's quick and evenly coats the pot with glaze.  In a small private studio, that would not be feasible, so I use pint containers of glaze and apply several coats with a brush.  My glaze wall: 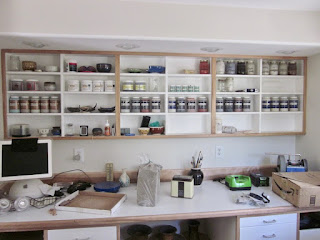 Here's the featured bowl with glaze applied (seen on a heavy metal banding wheel, that you can spin to facilitate applying glaze or underglaze stripes, etc.).  Glazes are not the same color as they will be after firing, which adds to the art.  The glaze companies have photos of what the glaze will look like after firing, but it rarely matches the results of mere mortals, and often looks very different.  Experience required.  Sigh. 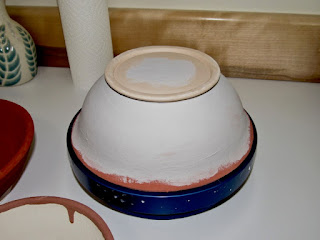 I glazed ten bowls (but only was able to fit nine of those in the kiln, due to a shelf issue).  Before this, I numbered all my pots (wrote number on bottom while clay was soft), and recorded all the data for the pot in a notebook (date, weight and type of clay, glazes used and how applied, etc.).  For this test batch, I didn't do that, and wasn't terribly careful about what glazes I used (they had all dried up, and I had to add water and re-hydrate them, so aiming for a final effect was secondary, if even that).

So this is what they looked like with random glazes applied (only nine fit in the kiln): 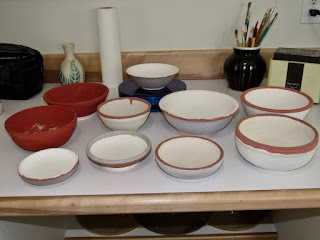 When the kiln was opened, this is what I saw: 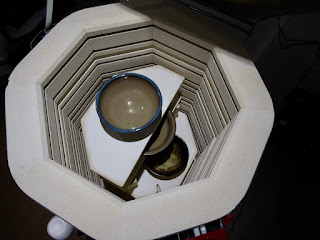 And then out on the counter (including the red one that did not get fired; it would have looked something like the one just to the lower left of it): 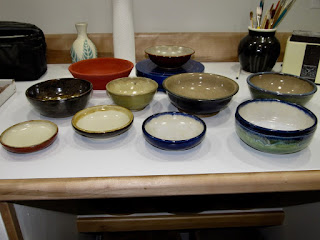 So the result?  I was not really happy with any of them.  There is a usable soap dish, and two needed and usable cat dishes, and a usable dog water bowl  (right front), but the soup/cereal bowls were a disappointment.  They shrank more than I remembered pots shrinking.  The glaze on some did not fully develop (should have run the kiln hotter or longer).  The clear glaze tended to craze; I could hear the tinkling after pulling them out of the kiln, perhaps too soon, as the glaze shrank faster than the thicker clay body.

I won't be getting any more of the Moroccan Sand clay, and will likely mix the rest of it with the porcelain blend — see how that works.

And throw the pots BIGGER, so when they shrink, they will end up the desired size.

Sigh.  What makes it so compelling.

For next time, the porch roof.  Work is proceeding (but more hot weather ahead).  So we'll see.
Posted by Chris Llana at 9:07 PM No comments: