Blame it on the Omega Block!

In the spirit of Jeopardy, the response, in the form of a question, is "This is the second post in a row that was promised to be about progress on the master bathroom shower—but wasn't; what happened?"

Blame it on the Omega Block.  That's not a new sci-fi novel I've started, but rather it's a weather phenomenon, a big stationary high-pressure zone, with low pressure areas to the east and west.  Circulation around high pressure zones (in the northern hemisphere) is clockwise; around low pressure zones, it's counter-clockwise, so the flow with the high plus two lows is: 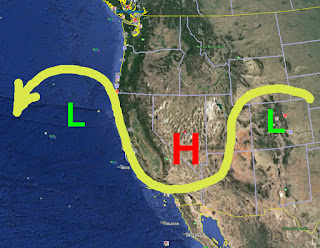 This flow is shaped like the Greek letter Omega, hence the name.  Well the "block" part is because it prevents storms and such from their normal west-to-east journeys.  Those journeys typically follow the jet stream, which because of the block is now shunted to the north, something like this: 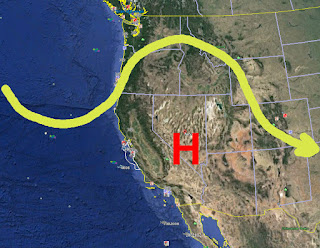 So the weather systems that form out in the northern Pacific get routed up to Seattle and parts — that's where the rain is going.  But this year we have a strong El Niño that's supposed to be bringing rain and cool weather to central and southern California.  It was starting to do that, but the Omega Block formed and is proving to be stronger.  Without the block, the jet stream this year would look more like this: 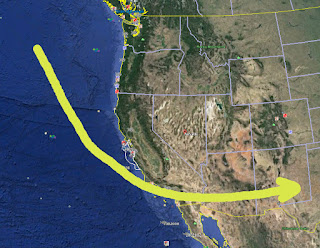 That would take the cool, rainy weather systems down the coast and we would be getting that weather — and we did start feeling the El Niño effects some, but with the Omega Block, not so much.  And with the high pressure zone where it is (to our east), the winds have been from the east — those are called Santa Ana winds, and they typically bring warm temperatures and clear skies.

So to the point (at long last), previously I mentioned that I would be installing new master bedroom windows when we got some warm weather here, because I had to remove a section of the outer wall for the better part of a day.  Wait for Spring?  Well, summer has come early to southern California — February has been dry and warm.  Wait, did I say "warm"?  Highs in the 80s, with some pushing 90˚ — that's hot!  (but nicely cool at night)


Dry?  We've been in a years-long drought, but our historical average for February is 3" of rain.  We've got nothing so far, and the only rain forecast through the end of the month is a 50% chance of morning showers on the 18th.  Where is this El Niño when you need it?

So at the end of Part 1, I had stripped the drywall off: 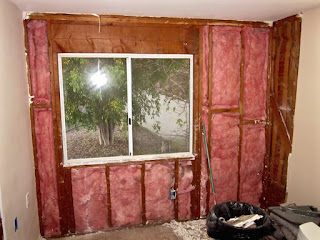 On any of these projects, I always make drawings; they don't have to be fancy or to scale, etc.  Just something to keep me a little organized.  For this project, this was my sketch, and it was a working document.  I made changes as I went along. 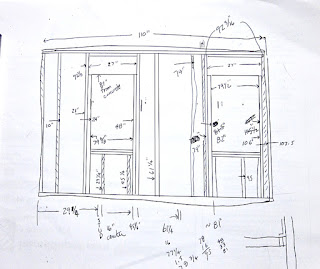 So after removing the insulation, I worked on framing for the casement window on the right (which I could do without opening the wall, so I did that the day before).  I determined which of the old studs could remain, and which had to be removed, and where new parts had to be added. 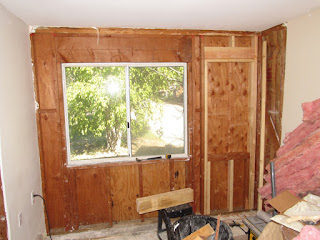 Then the next day, I removed to the old window, and the heavy header over it, and put in new framing, and sheathing on the outside where needed. 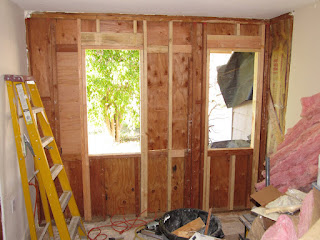 Then the new windows were installed from the outside, with the appropriate membrane flashing.  From the inside, this is the result. 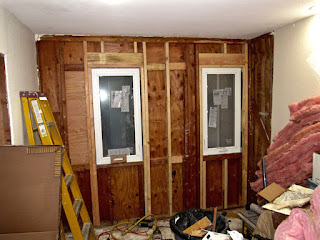 From the outside, the process started by removing the old simulated-shingle masonite siding. 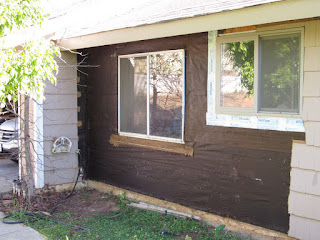 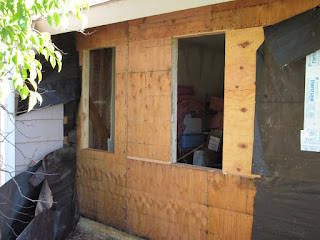 And with the windows installed and flashed, and the first layer of roofing felt installed: 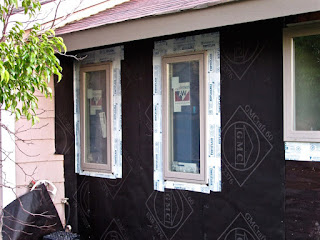 With these last two new windows installed in the front of the house, and with the warm dry weather set to last for weeks, I prepared to apply stucco to the rest of the front wall.  First, a second layer of roofing felt, then a metal channel along the bottom of the wall, and two layers of wire mesh (fastened with heavy-duty staples, and furring nails into the studs—these have little spacers which hold the mesh slightly away from the wall).  Last, I masked the windows with plastic to keep them clean.  The photo shows the start of the stucco going on, right to left.  I'll need two coats of stucco, then wait 30 days and finish with two coats of elastomeric stucco paint. 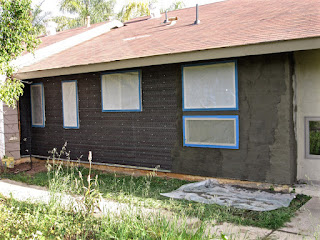 Next post — progress in the master bathroom!  Well, maybe, maybe not.
Posted by Chris Llana at 8:25 PM No comments:

I continue to slug it out with my master bathroom, but trouble getting tile and a marble threshold, and grappling with the water and vapor-proof membrane has been frustrating progress.  Nevertheless, there has been progress, and floor tile in the shower will be going down in the coming days (warmer weather coming so I can roll my tile saw outside with high temps going up to 80˚—ah, southern California!).

So last time I mentioned I might work on the pottery studio's car stereo system, as a nice diversion, and that's what I've been doing.  The components include 1) the speakers mounted in custom boxes built onto the walls, 2) a wall-hung cabinet of shelves, and 3) the car stereo head and power supply built into the cabinet unit.

First, I designed and built the speaker boxes, an important component for speaker performance.  You don't want the sound coming off the back of the speaker interfering with the sound waves coming out of the front.  There are closed (sealed) boxes, and ported (tuned) boxes.  For simplicity, I went with closed boxes, angled 5˚ inward, and with a 45˚ extension on the side.  A rectangular box is more susceptible to internal resonant standing waves that can adversely affect frequency response.

I started by cutting out all the pieces of 3/4" plywood.  For both the speaker boxes and shelf cabinet, I managed to construct everything from plywood remnants (left over from other projects), using up almost all of it.  Hooray! 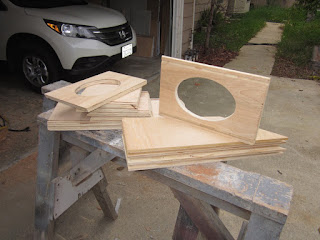 The speaker boxes and shelves are screwed to the studs behind the drywall, so I needed to screw the boxes on before fully assembling them. 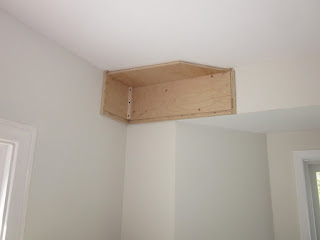 The tongues and grooves on the parts were made so the lower half of the boxes are well supported when assembled to the half screwed to the wall.  Once assembled, the rough boxes were given the joint compound treatment to make them smooth and ready for paint. 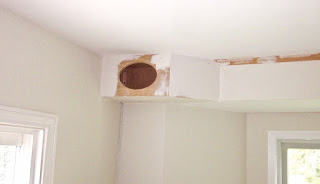 The boxes were then loosely stuffed with a sound absorbing acoustic polyfill. 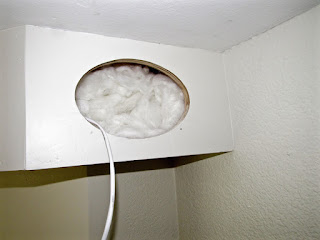 Next the shelf cabinet parts were cut to size and biscuit slots and tongues and grooves cut. 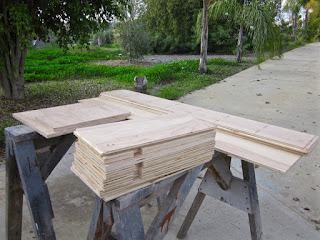 The next photos show biscuit slots and grooves. 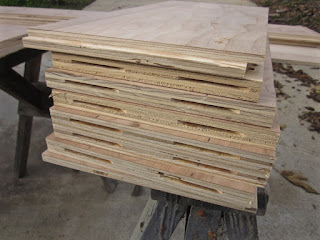 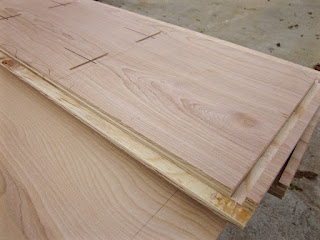 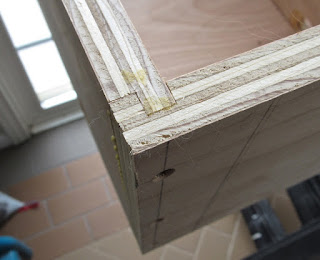 The assembled cabinet carcass is ready for trim. 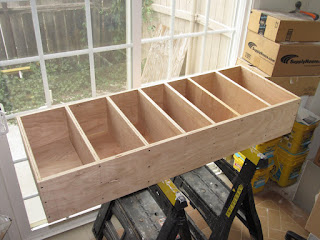 I covered the side with lacewood veneer, fastened with contact cement in the same manner as plastic laminate is glued on.  Then the inside of the cabinet was painted with an eggshell white, except for the stereo compartment, which got blue paint.  I used mahogany for the trim, as the color coordinated well with the lacewood veneer.  The trim, which covers the plywood edge, was fastened with biscuits and glue (no screws).  First on were the long side pieces. 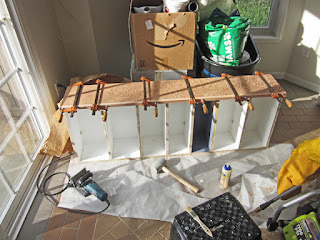 After the side pieces were dry, the trim went on the edges of the shelves.  After all of that was dry and the clamps had been taken off, the front of the trim was machine sanded, then a router used to round over the edges, and then all of that hand sanded.  Then a coat of polyurethane, a light sanding with 220-grit paper, then a second coat of urethane. 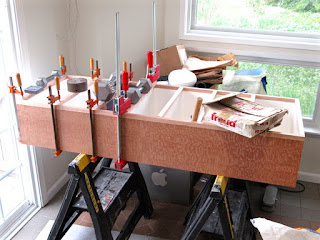 Next the Pioneer car stereo was adapted for its use in the cabinet.  I used a third-party mounting bracket (bought from amazon). 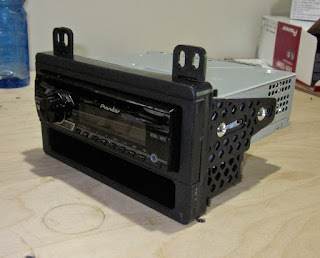 Then I built a chassis out of wood that could slide in the designated stereo shelf.  The surround was also covered with lacewood veneer and trimmed on one side with mahogany. 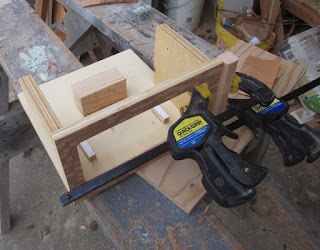 Installed, it looks like this (the 2.5 amp power supply sits on the right): 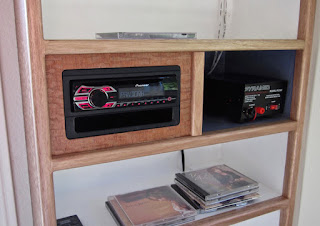 Here is the final result.  I hung the unit on the wall so I could mop underneath (important to remove the clay dust, which is not good to breath). 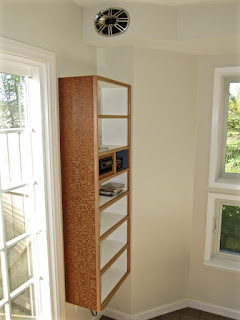 And a wider view: 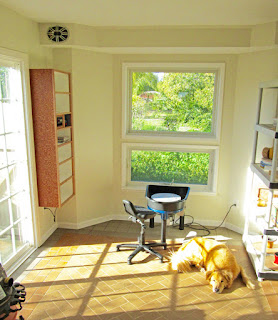 I didn't really know how it was going to sound, as it's a car stereo in a house, but I was actually blown away — it sounded great, much better than my most optimistic expectations. The speakers are 6" x 9" 3-way Polk Audio speakers.  Being mounted in the corner of the room, the bass response is enhanced.  Being in a mostly bare room with a ceramic tile floor added something.  It will go louder than I want, and the clarity continues at high volumes.  Very life-like sound.  I'm very pleased.  I've just played CDs through the system; I may or may not eventually add an antenna.

Next post — back to the master bathroom shower.
Posted by Chris Llana at 7:09 PM 3 comments: