Work has again wandered off from my planning, but I suppose it all has to be done, so the order may not matter too much in the long run.  In the short term, however, I'm not getting the gratification of seeing any more rooms actually finished.

I did manage to pull down the old ceiling in the new laundry/mechanicals room, and put up furring strips on 16" centers  for attaching the new drywall.  The reason I had to take down the old ceiling was that the half that had been part of the original garage was about 3/4" lower than the half that had always been part of the house proper.  Besides that, the roof trusses are spaced 24" apart (not ideal for attaching drywall), and they are not all at the same level.  Shimming the furring strips yields a nice flat level ceiling.

I also built in a new attic access hatch; the old one is in the hall, and would interfere with the placement of the new water supply lines. 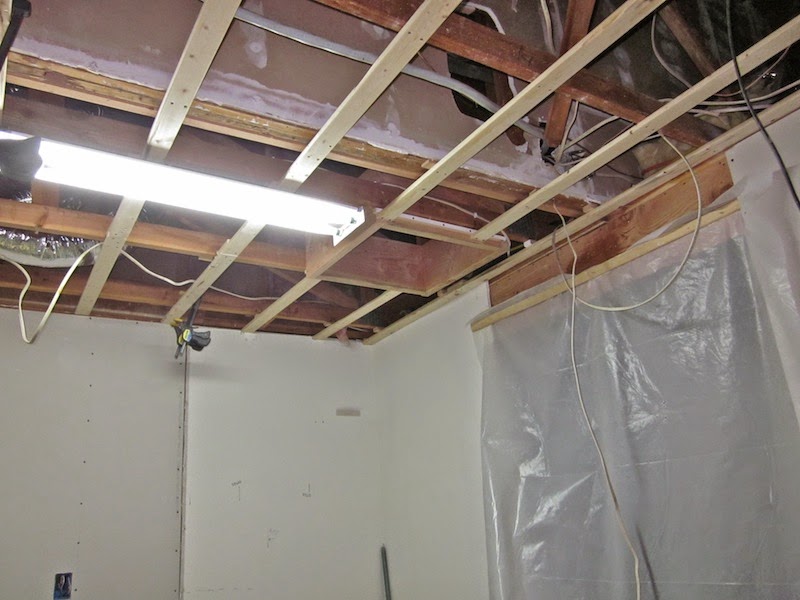 You can also see in the photo a 48" fluorescent fixture (two T-8 1" tubes), temporarily installed because it was dark in there (after putting up the new wall section separating the laundry room from the new guest bathroom).  It will stay in that position when the room is finished, but will have to be taken down when I put the ceiling up, then reinstalled.

That light is on the same circuit as the overhead light in the bathroom, and with the wiring needing rerouting, I also put in a new bathroom light and switch.  The old light was a traditional single-bulb fixture (very tacky); the new one is a very cool 10-watt LED unit (equivalent to 65-watt incandescent).  It's the same unit I used for my front porch; three more of them will illuminate my long hall, and another one will go in the master bathroom shower ceiling.  There are no "bulbs" in the light.  The LEDs are the tiny yellow squares on the sealed circuit board—I expect them to last a lifetime (mine, at least).  Photo shows light without translucent cover. 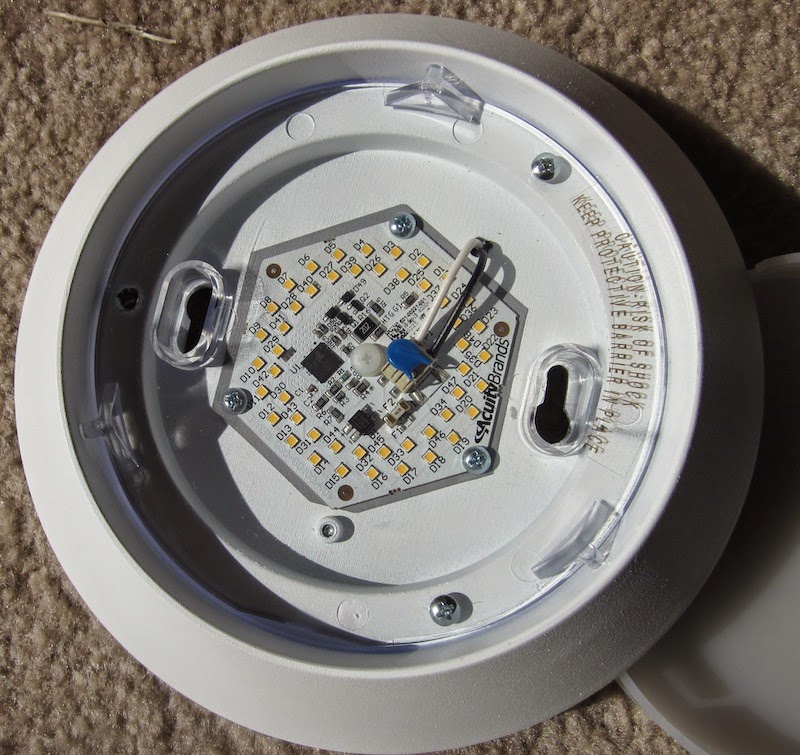 Instead of a regular switch, I used a programmable automatic dimmer switch.  It turns the light on when I enter the bathroom and turns it off after I leave (you can program it to keep the light on between one minute and 30 after the person leaves the room).   The LED fixture was designed be dimmed; I programmed the switch to turn it on at a low level, since the main purpose is to illuminate my middle-of-the-night trips to the bathroom.  The switch can also be operated manually.  It works great!  (The switch is shown mounted temporarily; the guest bathroom will likely be the last room to be finished.) 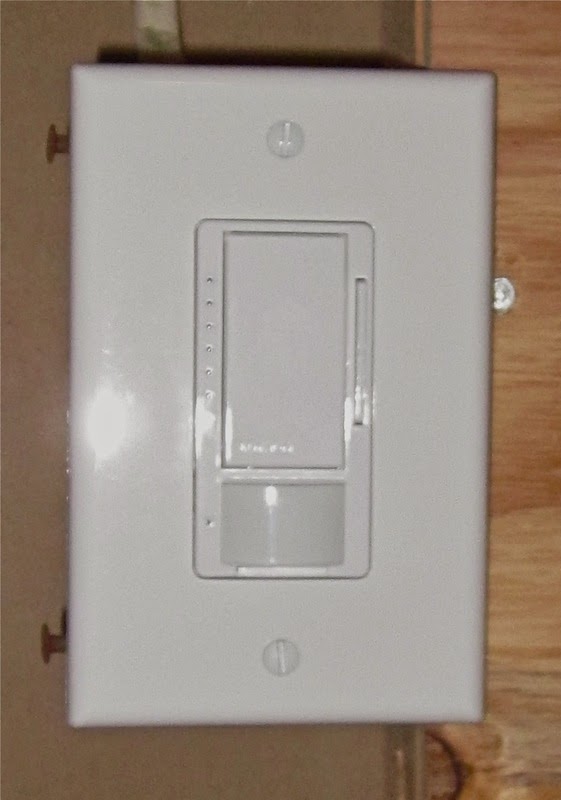 With the laundry room ceiling down, I had much better access to the wiring coming out of the old electrical sub-panel.  That sub-panel is being replaced with a new bigger one a few feet to its right.  Since I had started doing wiring for the new lights, I decided to continue with the change of circuits for the back of the house.  The added incentive was my desire to get more light into the new laundry room; a new window is going in, but can't be installed until the old electrical box is removed.  The old box circuits mainly served the garage and tool room, but the upgraded circuits for those rooms can't be finished until the new tool room window goes in (new framing needed, through which the wires need to pass), and much of the drywall in that room is removed.  Of course, there are shelves piled with tools in the room . . .

So today I removed the old single-bulb ceiling fixture and installed two new 48" fluorescent fixtures in the tool room (and a new switch location), and will start connecting the other light and receptacle circuits.  Somewhere in there will be reframing walls for window changes.