At the end of Pottery Studio — Part 5 I was removing the old floor tile in preparation for the new tile going down.  If you recall, when I ordered the remainder of the tile I needed, I discovered the new batch was not a match for the same color/stock number I already had, so I needed to figure out some way to blend or coordinate the two shades.  I had already planned to use a gray border around the adobe brown field, and after some experimentation, decided to have a double border — a gray outer border, and a reddish brown inner border surrounding the tan-brown field.

Not sure how it would end up, but just went ahead with it.  Here the gray tile is down, and I'm test fitting the inner border. 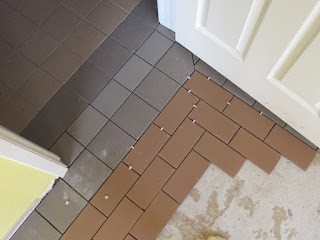 While I was using a staggered brick pattern for the inner border, I chose to put down the field in a herringbone pattern.  Here most of the tile laid down, before grouting. 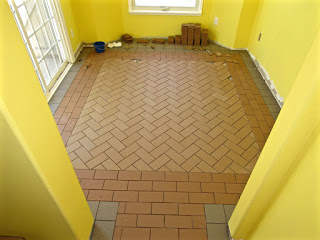 At this point, I made two decisions.  First, the bold tile pattern clashed with the bold yellow walls.  I decided to repaint using the same neutral off-white that I'm using for most of the rest of the house. 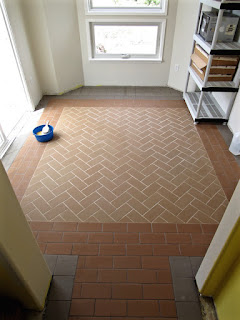 You may notice that the grout in the center section does not match the tile.  Hmm.  First, the gray grout went on without incident. 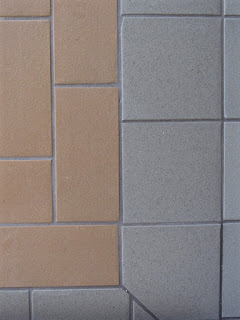 But as the light brown grout dried, it developed what is called efflorescence.  That is when the water in the grout dissolves minerals in the grout (portland cement), which minerals then rise to the surface and turn white.  Sometimes additives to the grout (polymers) do the same thing.  Adding too much water can be the problem.  Since the gray grout gave me no trouble, and I didn't mix the brown grout any thinner, it may be the additives that were the culprit.  Here is a photo of the dried grout compared to a batch of grout just applied — the difference is dramatic. 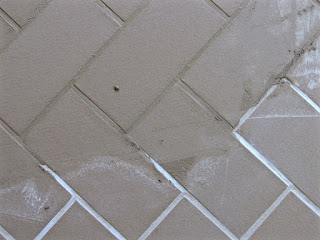 I had the same problem with the tan grout in the foyer, and learned that scrubbing with a sulfamic acid cleaning solution would correct the apparently common problem.  I need to wait three weeks for the grout to harden before doing this, so no photos of the finished floor with baseboard for now.

In the meantime, I will be cleaning out the other (south) half of the pottery studio, and extending the new tile floor into that part.  I've started relocating stuff in the house to accommodate the shuffle.  The temporary kitchen counter you see on the left gets taken apart and reassembled in the workshop; I've had to clear out that room for this.  The workshop is soon to have its two windows filled in, and a new window installed in a different place. 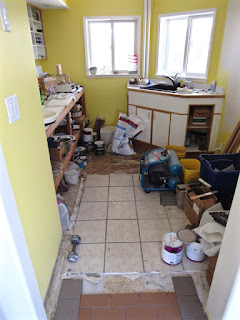 I'm still waiting for the stucco to cure on the outside wall of the pottery studio before I can apply the stucco paint.  That result will have to wait a few weeks for the Pottery Studio — Part 7 post.  My next post will therefore be another cooking venture (the pizza post has been more popular than my remodeling trials :-).  Apple-cranberry pie with a whole wheat/olive oil crust.  Really good! 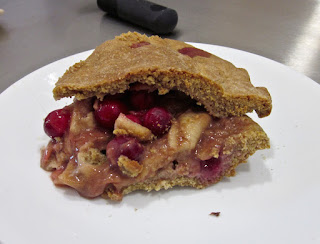