Work on the workshop windows/electrical is done (except for outside painting).  I won't finish the room until most of the rest of the house has been completed, because it's going to be a hobby room (building instruments, etc.), and getting the kitchen, bathrooms, and bedroom done takes precedence over hobbies.  When that time comes, I will be installing a new floor (interlocking textured plastic tiles), work bench, and storage.

Since my part 2 post, I continued applying stucco in the outside, and drywall on the inside.  In the photo, there is one section of wall without drywall, waiting for the 6" exhaust vent to be installed, which could not be done until the stucco was complete. 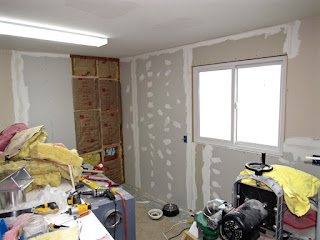 And here that is, with the last batch of stucco still wet.  I inserted a circular foam plug in the wall where the exhaust vent would go, and stuccoed around that so as not to have to cut a hole through the stucco when it dried. 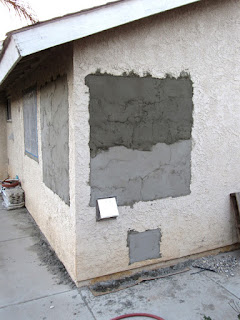 This is a closeup of the vent on the outside. 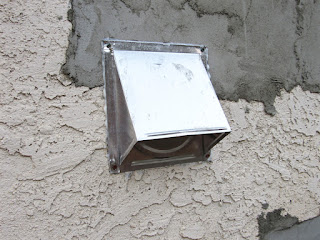 Once that was in, the last piece of drywall went on, joint compound applied and sanded (not my favorite thing), and the wall painted.  At that point, the electrical receptacles could be installed and cover plates attached, and that circuit switched on.  For the last year (?) I have relied on a 50' heavy-duty extension cord run from the home theater for power in the workshop, so this was a nice event.  Six new 120 volt (and one 240 volt) 20-amp receptacles.

After that, the window was trimmed out, nail holes spackled, and that painted.  Here's a halfway "before" photo and two "afters." 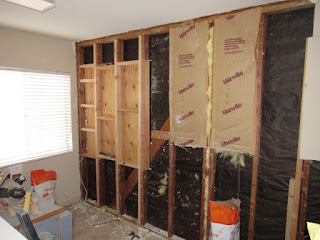 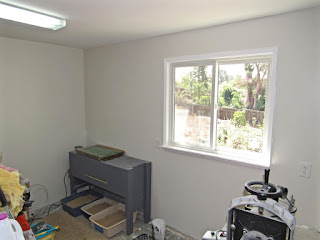 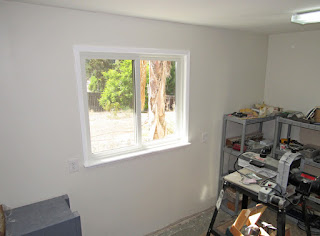 I now have a rough schedule for future work, based largely on seasonal temperatures:

Various other smaller projects will be done along the way.
Posted by Chris Llana at 11:19 AM