The Fireplace Must Go!

But why?  Doesn’t everyone like a crackling log fire to take the chill off a cold winter’s night?  Never mind that the fire is sucking all the warm air in the house up the chimney, and to replace that air, sucking in frigid outside air through all the little leaks in the rest of the house.  Never mind having to haul out the ashes.  Never mind that the extra carbon dioxide produced contributes to global climate change.  And never mind that the smoke rising up through the chimney pollutes the air, so on those (mild) southern California winter nights when I take my dog for her bedtime walk in a neighborhood full of fireplaces, I feel like I’m sitting on the downwind side of a campfire.

But no.  My fireplace is big and ugly, and with its big hearth, occupies a lot of space — space I’d rather use for something else.  And then there’s that strange 3.5” jog in the living room wall, next to the fireplace. 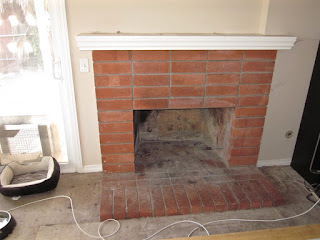 I wanted to make that wall flush across the room (a novel idea?), making the wall thicker in the process for added insulation.  Seems like whoever did the plans didn’t intend such a strange thing.  Seems like the builder might have sensed the opportunity for a short-cut, a chance to save a few more bucks on each of the matching tract houses on the street (3.5” is the width of a 2x4 stud wall).  Whatever the reason that odd jog was there, I was determined from the day I bought the house to make it straight! 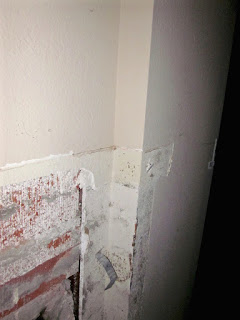 I had not intended to get rid of the fireplace until after more of the higher priority projects had been completed (bathroom, kitchen, bedroom, etc.), but it just sat there in front of me every day — the elephant in the room — taunting me with mocking sarcasm — for years.  Tons of solid brick and mortar, a veritable bastion, always the only thing standing after fire razes a house — it let me know it was not threatened by mere flesh and blood.

An exquisite challenge?  The Berlin Wall was taken down with hammers and cold chisels.  And I had a Makita electric demolition hammer.  Ha! 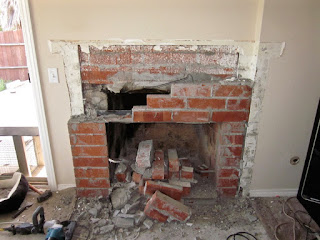 I started thinking I could just remove the front of the fireplace and fill in a short stud wall where that had been, extending down from the wall that must be just above the mantle.  Then insulate and put up drywall and add paint.  Tearing out the back of the fireplace (the base for the chimney) could wait for another time.  But after getting started, I discovered there was no wall back there.  There was just drywall slapped on to the chimney, probably with construction adhesive.  The missing 3.5”?  And so much for insulation.

I continued on, pulling off the bricks that had protruded into the living room, until I could look under and see the damper — jammed open, probably jammed open since the house was built.  It did not close easily, its mechanism clogged with decades worth of crud.  So essentially there has been a big hole in my house during the heat of summer and cold of winter.   Hmmm. 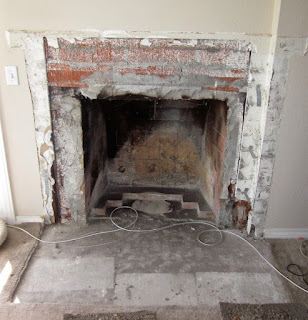 Seemed like a good place to stop.  Probably not wise to remove the base of the chimney while the the part above that was still up there.

The Chimney Must Also Go

The base from the outside: 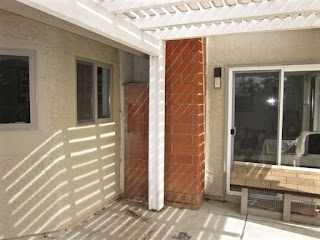 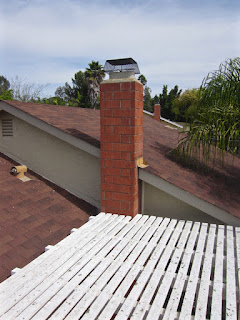 So up on the roof I went.  The top of the chimney was pretty strong, resisting my attack with hand tools, but my little electric jack hammer made quick work of it.  After a couple of rows of brick were gone, the part below came apart pretty easily.  I was a little surprised to find there was nothing behind the chimney (other than the inside of the house) — no plywood/sheathing, but that was consistent with there being nothing behind the stucco.  Sigh. 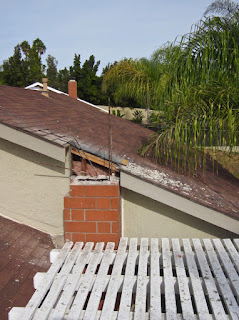 With the chimney out of the way, there was a pretty big hole in the edge of the roof that needed filling.  I installed backing lumber to give continuity to the upper and lower sections of the roof edge, and then added some plywood and the missing fascia. 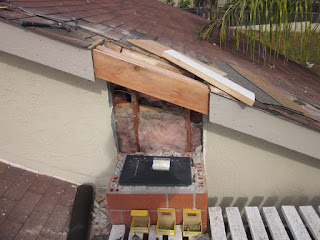 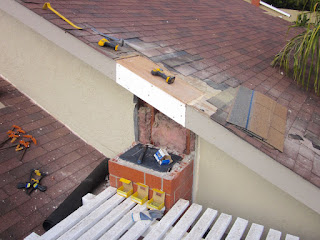 Add shingles and paint, and some badly needed plywood to the wall below: 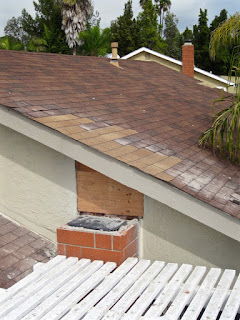 At this point, I stopped due to two days of rare rain on the way (the Omega Block had moved on and El Niño was again taking control), and covered the open wall with plastic.  Removing the remainder of the chimney will take some planning, since there is no existing wall to separate my living room from the outdoors, once the bricks are gone.

So what’s next?  I’m working on trimming the new windows in the master bedroom.  Running water supply lines to the guest bathroom is also coming up; that will require some other work in the guest bathroom (which had been planned for the end of the remodel).  My structured six-month master plan has fallen apart, but I’m now good with that.  Ad lib is the new plan.
Posted by Chris Llana at 9:46 AM