I was expecting to be writing a post about getting the Corian kitchen countertop made and installed,  but I wanted to have some alternate plans (choices) in case the contractor was not giving me confidence (or the dollar quote struck me as too high).  I made a plywood template so I could route out the sink opening myself (having the contractor just fabricate a blank counter), and then procrastinated (still not comfortable with my options).

In the meantime, I continued tiling the master bathroom shower, and have now finished that, so that's what this post is about (more on the kitchen counter at the end).  This photo shows, more or less, where the tile was when last I reported: 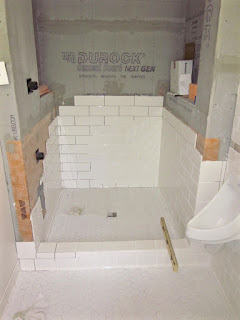 My routine every morning was to mark the next batch of tile for cutting (either using a tape measure or by holding a whole tile up to its designated position), using a Sharpie marker.  I would do a batch of about ten or twelve; beyond that, there would be no installed tiles to measure against.  A large portion of the tiles I put up needed cutting, so I didn't do large batches (although a professional would have to keep putting up all day).  Then I would take my pile of marked tile out and cut them on my diamond-blade sliding-table wet tile saw ("wet" because it sprayed water on the cut to lubricate and keep the blade cool).  Then the cut tile would go back to the bathroom for test fitting, and if needed, go back to the saw for minor adjustments.  Then I would mix a batch of mortar, and start putting tile on the wall.  When the tile was up, time to clean my tools, then back in to clean up any mortar gone awry.

Next morning, the mortar would be hard.  Repeat the process, except when I ran out of tile, when I would do some grouting.

When I was putting tile on floors (big horizontal areas, with mostly whole tiles), I spread the mortar on a fairly large area with a notched rectangular trowel.  Bare tile would be set in the mortar (most of the time, although sometimes a thin coat of mortar would be spread on the back of the tile—"back buttering"—if tile adhesion was in question).  For the shower walls, with all the cuts and edges, I left the wall bare and spread the mortar on the back of each tile as it went up with a small notched margin trowel.  That way, I wouldn't have to scrape mortar off the wall beyond where tile was placed.  It worked very well.  Neat and tidy. 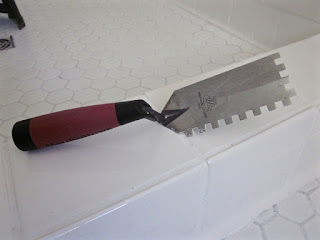 One of the tricky areas was the shelves, which had concave-rounded cove base tile and convex-rounded bullnose tile.  Here, I'm installing those pieces, and will add the flat 4 x 12" filler tile in between after the mortar is dry. 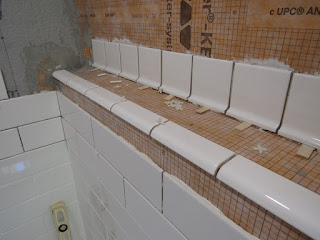 Another place that took a few days to complete (installing a couple of pieces, letting the mortar dry, before adding the next couple), was the inset for the dog shower outlet: 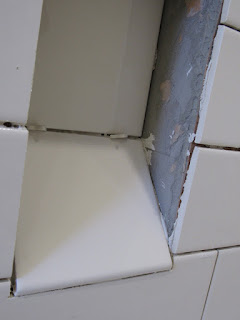 I would work on several small areas in different parts of the shower at the same time, and many of the cut tiles were similar in size, so I lettered the location and the back of its corresponding tile.  When I brought my pile of cut tiles back in, I was sure where each piece belonged. 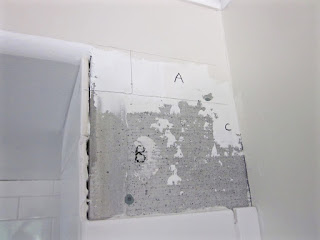 This is what my tile saw looked like, with the red laser line showing where the cut would be made:  (having the right tool makes a huge difference!) 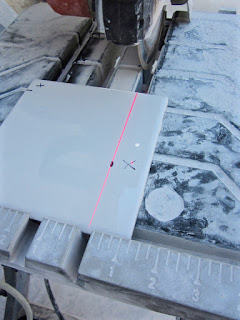 I also used diamond hole saws to cut round holes in the tile.  I cut the hole for the shower arm before putting up that tile, clamping a piece of plywood with a proper sized hole to the piece of tile to guide the bit.  I could then spray water into that recess to lubricate and cool the diamond hole cutter.  Without the plywood guide, the hole saw would tend to skip around on the tile's hard glass glaze.  The resulting hole was very smooth: 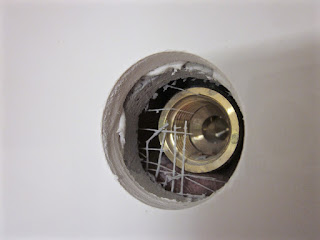 The two grab bars for the shower needed six screws each, and each screw had to penetrate the tile and fasten into the underlying wood backer.  A regular masonry bit would work for the cement backerboard, but would have trouble getting through the tile glaze without cracking it — so another smaller diamond hole saw (1/4") was used.  I had to drill these holes after the tile was up (and vertical), so it was more important than ever to stabilize the bit until it got started.  Here's the hollow bit, and my improvised hole guide (the tape just kept the wood roughly in place; I had to hold it firmly with my left hand until the bit had made a good start): 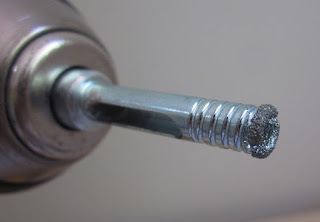 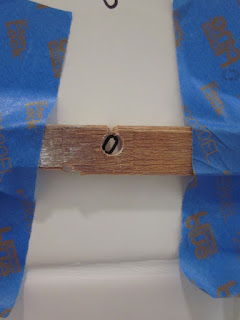 The stainless steel grab bars have covers that snap over the screws.  In this photo you can see the three finished holes in the tile. 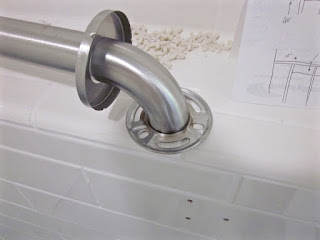 So the shower is finished!  Hooray!  (although still no water supply for it).  This is the left side, showing a vertical grab bar and the two shower controls (the one for people on the top, and the one on the bottom is for the dogs). 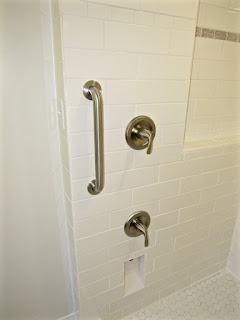 There are shelves on both sides.  The one on the right side is wider (for shampoo, soap, etc.).  Although I do not feel the need for grab bars now, this is my retirement home, and eventually (when I'm really old and feeble) I may appreciate them (and better to install them now). 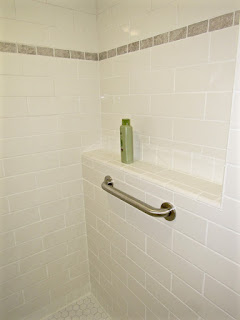 And the whole shower, with compression curtain rod installed: 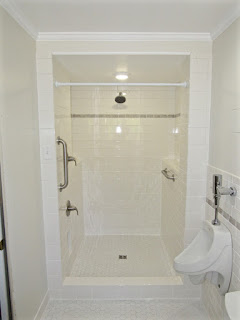 And the dog shower, for those who have never heard of such a thing . . .  The water outlet has a quick-release hose fitting; a short hose with a multi-spray garden nozzle can be easily connected.  Works well all the time, but especially in the winter. 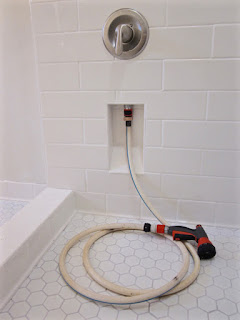 What's next?  So many projects—it's hard to say.  I've just ordered another batch of PEX supplies for the new water supply system; I hope this will give me all the parts I need to complete it.  So that's coming up soon.  I cleared out the laundry room today to make room for the water softener installation, so that's coming up soon.  And I have physical and internet places sorted out to visit to move ahead on the countertops for kitchen and bathrooms (and those pesky, unobtainable marble bathroom thresholds).

The plan is now to fabricate my own kitchen countertop, using Formica solid surface material (instead of Corian brand).  Still have a couple of things to check out, but it could save a couple of thousand bucks, and with a better result . . .
Posted by Chris Llana at 10:02 PM