Moving right along.  Well, not as fast as I would have liked.  The kitchen countertop has been going slowly, for various reasons, but there is now enough progress to report.  The countertop is finally done, but not yet installed.

In the last countertop post, I had finished laminating the first two sections (of three) and was waiting to buy some more maple before continuing.  With wood in hand, I finished laminating and planing all three sections to the same thickness.  Then I carefully epoxied them together, using biscuits to keep them aligned. 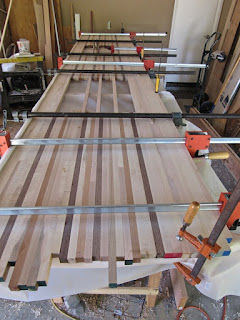 I had laminated the countertop longer than it would end up so that I could make clean and square cuts on both ends.  I considered doing this with a circular saw, but with the hard wood, guiding a perfectly straight cut would be near impossible.  I tried, but making a test cut outside of the line (fortunately).  Instead, I ended up using a router with a spiral carbide straight-cutting bit, guided with a straightedge.  Worked well.

After triming both ends of the countertop, I glued the thicker edge pieces on the front and one end: 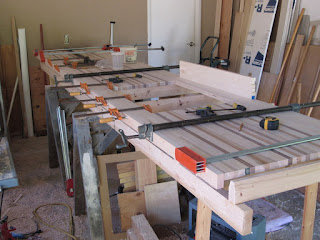 Here's a closeup of the overhanging edge piece: 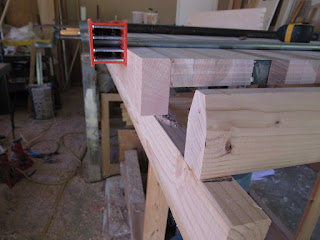 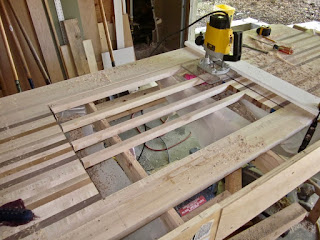 For the undermount sink, I had previously made a plywood template to perfectly fit the shape of the sink, and made the cut using the spiral cut bit with a template guide on the router base.  After making that cut, I used a round-over bit for the edge of the sink opening. 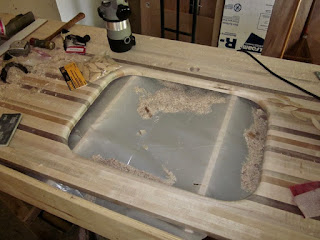 The countertop is radiused at two of the corners.  I made templates for those shapes, and used a router again to trim the countertop edges.  Actually — three routers :-) 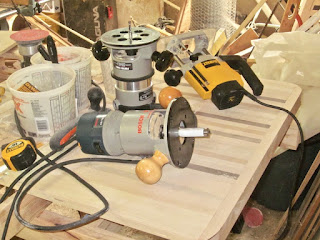 This photo shows one of the templates with the router in position: 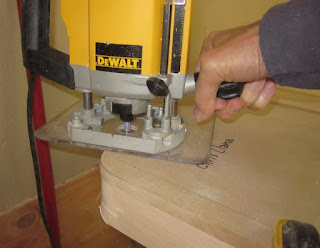 Once the edge pieces were trimmed, I rounded over the top and bottom of the edge to form a "bullnose."

At this time, I turned the countertop over and rolled one coat of epoxy on the bottom to seal the wood (moisture barrier).  Changes in moisture content of the wood (with the weather) could cause the countertop to expand or contract, or otherwise cup or move.  Here's what that looked like (didn't have to be pretty): 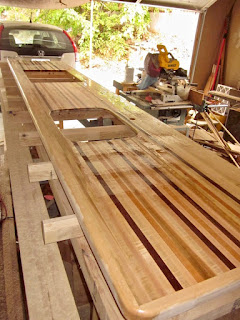 Then after a day of curing, I flipped it back over upright and sanded until smooth.  Then I rolled on the first coat of epoxy, this time using a special formulation of hardener that would ensure a clear, colorless finish.  Because the various strips of wood were of different species and different hardness, they absorbed the epoxy differently.  Some strips soaked it up, and with others, the epoxy stayed mostly on the surface.  So the finish was uneven. 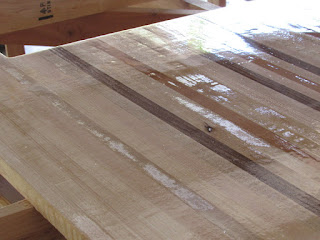 I used a random orbital sander (and 60-grit discs to start) to level everything.  Then repeated after the second coat, this time sanding starting with 120-grit discs.  After the third coat, the epoxy was very glossy, but not completely flat, and I was not able to get rid of all the bubbles and bits of grit during the application process.  But the gloss brought out the color in the wood. 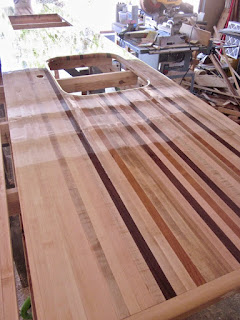 I continued to use the random orbital sander, with finer grits, finally up to 220-grit after the fourth coat.  The surface was getting to be quite flat; the dry sanding left white epoxy dust. 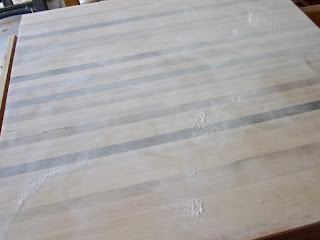 I had considered leaving a high gloss on the countertop (assuming I could get apply a perfect topcoat), but decided the gloss would show scratches and other blemishes.  So I decided on a satin finish, that could be had by sanding.  That also had the advantage of producing a flatter, glass-smooth surface.  So after the last 220-grit sanding, I started to wet-sand by hand, first with 320-grit, then 400, then 600, and finally using 800-grit paper.  The water lubricates the fine paper, keeping it from clogging.  You can also see when you are removing the top layer of epoxy by the white slurry that is produced. 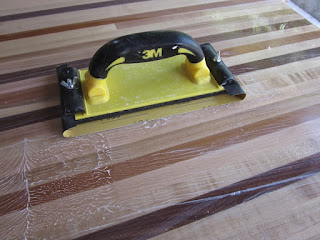 After the 800-grit, I was happy with the surface, and carried the countertop inside to test fit it on the kitchen cabinet.  It fit, happily. 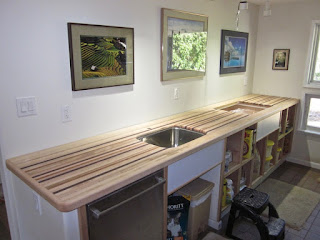 I may apply furniture wax at some point.  But next I have to attach it to the cabinet using screws from the underside, along with silicone adhesive.  Then I will finish and install the matching laminated backsplash.  Then install the faucet and the cooktop.  Those steps will be the subject of my next post.

This is an arid climate (we've had no measurable rain since last spring), so I provide the birds with clean water in my front and back yards.  A recent large visitor (on a hot day), sat on the edge of one of the water bowls (occasionally drinking) for 15 minutes before flying off. 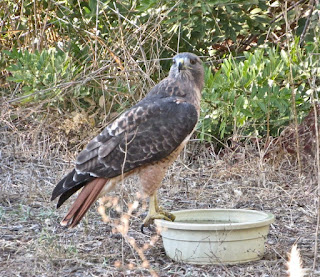