I'm calling this post Part 1 even though I did a substantial amount of work on the six-foot (2 meter) garage extension almost two years ago.  That was the concrete work — putting in footings, stem wall, floor, and recontoured driveway for the extension.  It was months of work, taking up four posts, but labeled "Concrete Work," so this new post will just have to be "Part 1."

There will be several parts that follow, as I expect this project to last through the summer.

But I first need to explain the project.

I bought this house in 2013, without realizing the garage had already been altered.  Without taking any measurements, I assumed it was original.  Not.  On the day I arrived from the East Coast after a four-day drive, I discovered that my relatively short Honda CR-V just barely fit inside, with only an inch to spare.  No way to open the rear hatch, no way to walk around to the other side with the garage door closed.  Inconvenient at best.

I then learned that a prior owner had turned the back half of the originally roomy garage into a fourth bedroom.  I thought, easy enough to reverse that — just tear down the partition wall.  But then I noticed they had also poured another four inches (10 cm) of concrete on top of the garage slab to bring the extra bedroom floor up to the same level as the rest of the house.  Not so easy to just pull up 4" of concrete.

So after three years of working on other parts of the house (and refining garage design sketches), I decided to extend the front of the garage by six feet, to be able to fit a slightly longer (electric) car, and have room to walk around it.  At that time I did the concrete work so as to be ready to do the wood construction at a later date.  That is, now.

I never did like the 16-foot-wide (double) garage door; they seemed more appropriate for people who use their garages for storage and outdoor equipment, and not two cars.

I needed just one car in the garage; I will use the rest of the space for woodworking.  So ditch the 16-foot-wide door and install a single 9-foot-wide door.  Add a nice window on the other side.  That would yield a more usable, efficient space.

This post covers the demolition/conversion of the front of the existing garage so it will mate with the new front extension.

Step one was to remove the old wide door and sell it, and along with that, buy the new insulated 9-foor door (both seven-feet tall).  I would not have bought the new one as soon as I did, but it was on sale.

I could not just cut off the overhanging eves on the front of the garage and be done.  The header for the wide garage door extended down to the top of the garage door, that is, seven feet above the garage floor.  Even if I did not mind having a massive beam intruding into 8.5-foot headroom of the "new" garage, it would now be in the middle of the new ceiling, and would prevent the new garage door from opening.

At the same time, I certainly could not just remove it, because it was holding up half of the garage roof.  The ends of the roof trusses all sat on top of that beam, and would have to be supported.  The solution was to raise the beam up about 18-inches (45 cm), and hang the trusses off the side of the beam, using joist hangers.

First I opened up the ceiling.  I measured eight feet back from the new front of the garage and removed the drywall.  Eight feet is two courses of plywood/drywall. 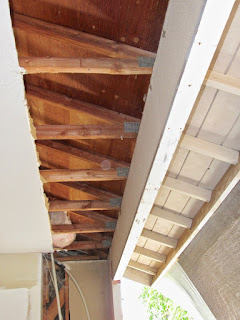 This close-up shows how the parts of the trusses are joined together — steel plates with lots of teeth pushed into the wood. 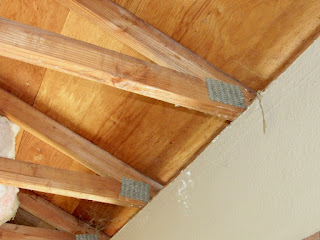 I would have to cut off the trusses on the same plane as the back of the header/beam, and to do that, I had to remove the lower section of shingles and plywood from the roof. 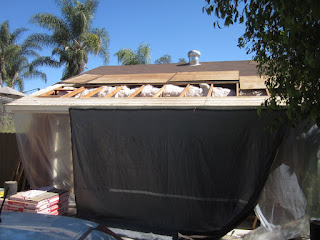 Of course if I just cut off the trusses without adding some support, the roof would promptly cave in — not a good thing.  So I build a temporary wall to support the ends of the trusses. 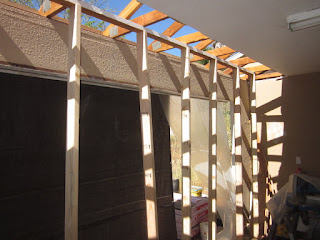 The beam itself is twenty feet long, 15 inches tall, and 3.5" thick, and weighed upwards of 200 pounds.  A force to be reckoned with, and not something I wanted to be moving around over my head.  So I built well-secured temporary scaffolding to support that. 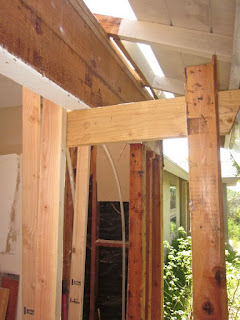 The header beam was topped with a conventional stud wall top plate, consisting of two layers of two-by-four.  I had to cut that away to separate the header from the trusses.  The photo shows it partly cut away. 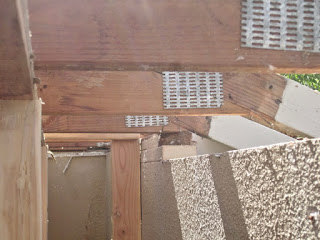 At this stage, the beam was free of the trusses, but still connected to the walls at either end, and supported by two 4x4-inch posts at both ends.  Since I needed to raise the header by about 18 inches, so that the bottom of the header would be flush with the ceiling, I would have to replace those old shorter posts.  I decided it would be structurally more sound to keep the outside posts in place (and double them with the new longer posts), and replace the old inner posts with the new ones. 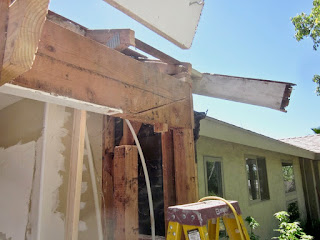 I also needed to cut the upper ends of the raised beam at an angle to clear the new roof.  In the photo above, the cut is at the bottom, because I discovered the beam was sagging, and wanted to flip it over so the crown would be on top. 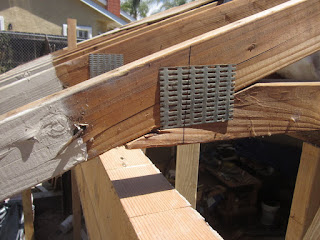 I drew cutting lines on the sides of the trusses flush with the inside of the beam.  I decided to leave the joining steel plates in place, as I knew they were very difficult to remove.  In order to saw off the truss ends, I first made two cuts through the steel plates (on either sides of the lines) with my high-speed grinder fitted with a metal cut-off wheel.  The technique worked well (and saved my wood saw teeth). 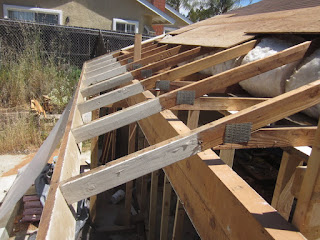 The above photo is a wider view of the trusses ready to be cut off.  The photo below shows the beam on its side, adding working room. 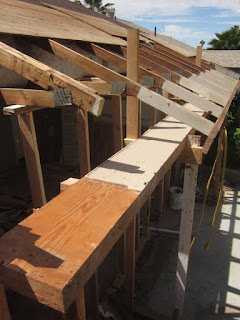 With the ends of the trusses cut off flush with the back of the header, it was time to raise the big beam up and put it on top of the new posts.  To do this (not having a crew of workers on ladders), I used a home-made sky hook, to wit, basically a 1200-pound capacity boat trailer winch mounted on the side of a ten-foot-long 2x4, with a roller attached to the top (actually a little more refined than that).  With the strap attached to the middle of the beam, and a friend guiding the ends, I cranked it up into place.  Nobody was injured during this procedure!  Hooray!  Here it is all fastened in place: 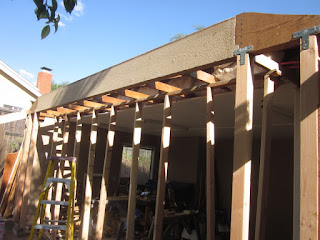 Because of the sag of the beam, when I turned it over (crown up), the trusses ended up a bit lower than the bottom of the beam, so one by one, and a little at a time, I jacked up and shimmed each truss in turn (shims on top of my temporary wall) until they were flush with the bottom of the header (basically raising the whole roof).  To do this, I used my car jack with a 2x4 extending up to each truss. 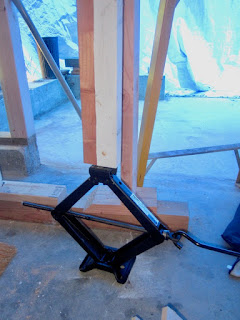 Once in place, I fastened each truss to the header using substantial joist hangers.  I also had to add some blocking to correct some truss spacing issues (and straighten one that was leaning). 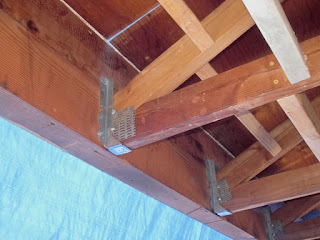 With all the trusses securely fastened to the header, I removed the temporary wall.  So I now have a flush ceiling, and ready to start building new walls. 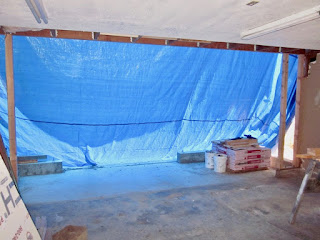