So this is the post about bringing the construction of the six-foot garage extension to the point of installing the garage door.  Last post covered the building of the walls, and installing the joists for the ceiling.  Ordinarily, the next step would have been to build the roof — to keep the rain out.  But this is southern California, in June, and during the six years I've been here (most of them in the midst of a multi-year drought), it has never rained in May, much less during the rest of the summer.

But with almost 24" of rain since last fall, this is no typical year, and in fact it rained four times during May.  And as I write this, there is a 40% chance of showers tomorrow night!  So tomorrow I will bolster the big blue tarp on the roof to keep the rain away from my new ceiling.

To install a garage door, you need jambs — side jambs and a header jamb, preferably 2x6s.  These jambs are what support the garage door rails, and they go around the periphery of the inside of the door opening.  The side jambs are supposed to extend pretty much down to the floor, but in my garage extension, the 2x6 walls sit on an eight-inch thick concrete stem wall.

In this photo I have used a short piece of 2x6 to represent the side jamb.  It gets fastened to the wall, but as you can see, the 10" high concrete stem wall prevents it from extending all the way to the floor.  The lowest lag screw for the door rail is somewhat above the floor, but below the top of the concrete.  To wit, the concrete needs to be cut away some to allow the jamb to extend further down.  It would have been easy enough to insert a spacer in the forms when the concrete was poured, but that was a couple of years ago, long before I thought about mounting the garage door. 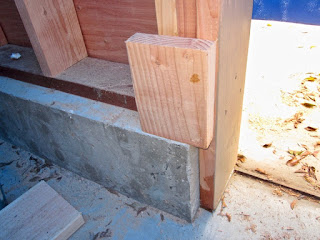 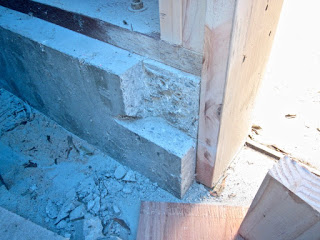 So before the jambs could be attached, the drywall needed to go on, and the ceiling drywall really wants to go up before the walls are covered.  So remembering that I work by myself, and the ceiling in the garage is almost nine feet high, much of this post (and the last two) is about how one old person can finesse lifting heavy, unwieldy sheets of drywall (and plywood) up to the ceiling, and hold it there while screwing it in place.

I have two step ladders (6' and 8') and a wooden prop leftover from putting drywall inside the house with mere eight-foot ceilings.  The first step is to put in place one of the ladders to support one end of the drywall, and then somehow get under the 4' by 8' sheet and lift it in place.  This first step is usually the biggest physical challenge.  After it's up in the air and stable, lifting it the remaining distance up can be done bit by bit.  I put the first two whole sheets up using slightly different techniques. 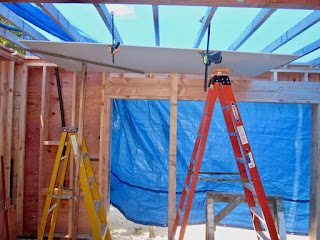 The first (above) used the 8' ladder and the prop to start, then I added blocks of scrap wood under the prop and on top of the ladder, and added some clamps to help stabilize and raise the sheet.  The next levitation used the six-foot ladder placed on top of my stock of shingles (couple of feet high), and then the eight-foot ladder pulled in (with my foot) afterward. 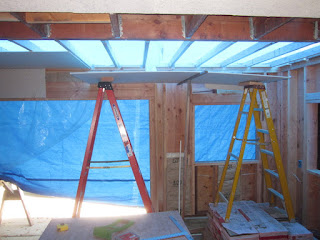 Drywall should be supported all around its periphery, especially important for drywall on the ceiling.  I used wooden cleats for this between the joists, to support the drywall and lock adjacent sheets together.  Attached before the next course of drywall goes up, of course. 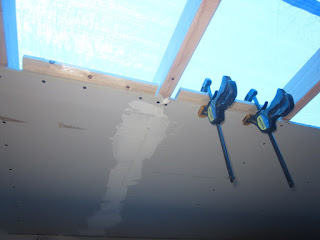 But also for plywood.  I substituted a 4x8 sheet of 19/32" plywood for a sheet of drywall in the middle of the ceiling for added strength and stiffness.  The plywood also enhanced the connection of the old and new sections of the garage.  It also presented a slightly more difficult challenge getting it up in place.  Since I could securely screw a hook into the exact center of the plywood, I decided to use my skyhook to raise the plywood up to the ceiling.

First, put the skyhook up on top of the ceiling joists. 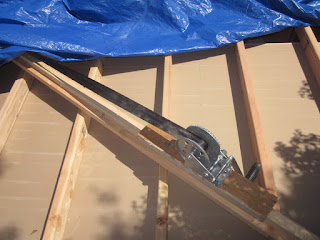 With the strap running down into the garage as close as possible to the middle of where the plywood would go. 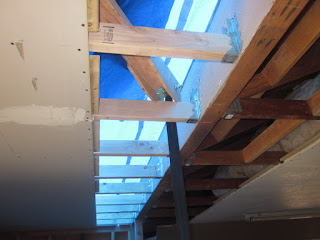 Then hook onto the plywood and start cranking the winch. 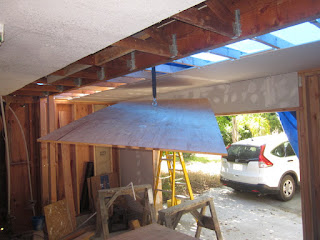 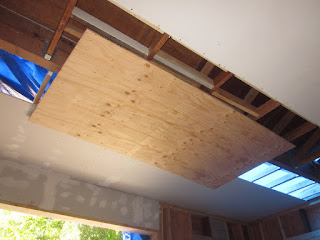 Then prop it up, clamp it, screw it. 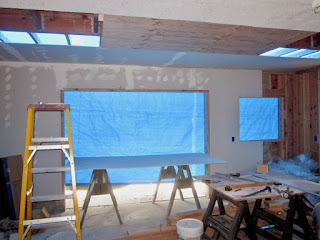 The remainder of the ceiling consisted of partial sheets of drywall, which were much more manageable (lighter), and went up without any challenges.  Next would be the walls — insulation, electrical, and drywall.  But first I needed to install some plumbing inside of one of the walls, to wit, a 1/2" PEX line carrying softened water to a faucet to be used exclusively for washing my car.

I don't run the relatively large volume of outdoor water (used for irrigation) through my water softener.  It would overwhelm it.  But that's the water I've been using to wash my car. Unfortunately, the city water here is extremely hard — highest in the country (like our electric rates and gasoline prices) and left mineral spots and streaks on the car, even after trying to dry it all off.  Hence the desire for a special outdoor faucet for car washing — very little water needed.

The new line looked like this before being buried inside the wall.  PEX into a special right-angle shower fitting into a short piece of threaded brass pipe (a "nipple"). 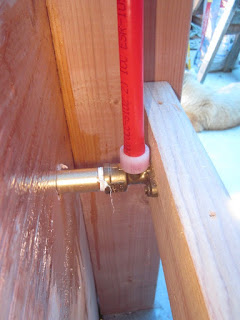 Outside it looks like this now.  There will be almost an inch of stucco applied to the outside of the sheathing (covered with roofing felt in the photo); the epoxy-soaked wood serves as a spacer. 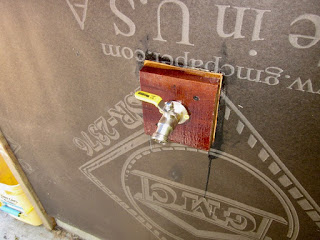 I just used the soft water faucet to wash my car a couple of days ago, and the result is spotless. 😊

So after filling up the inside of the walls with insulation and other stuff, more drywall. 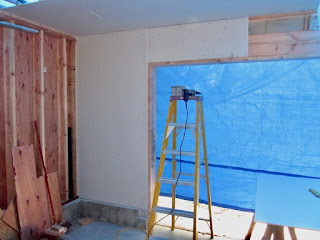 Then joint compound, and sanding, repeat.  Not so much fun, but not necessary to make as smooth as inside the house proper.  I like my garages, but . . .

And then — finally — the garage door jambs go on, attached with long lag screws. 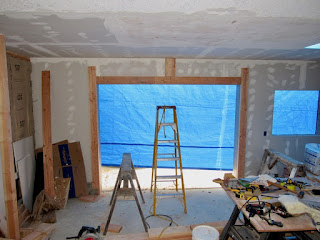 And then paint, because it's much easier to paint before all the steel door rails go on. 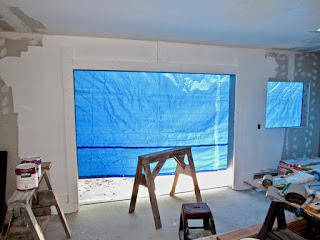 You'll notice that I've only finished off the area impacted by the garage door.  The rest of the garage interior will be completed after the roof is done.  The next post will cover the installation of the garage door, the electric door opener, and windows.

Bonus photos (banana tree):  I brought home a baby banana tree last fall, put it in a pot for the winter, then moved it into the ground when it warmed up a little.  It needs lots of water and fertilizer, and now that there is more sun and it is warmer, it's been growing fast — adding a new huge leaf every few days.  It's now almost eight feet tall.  Banana trees grow up and produce bananas in a year or less, in a big bunch called a hand.  Just one hand, and then the tree dies.

This is what the hand/flower looks like on a commercial tree — very odd thing. 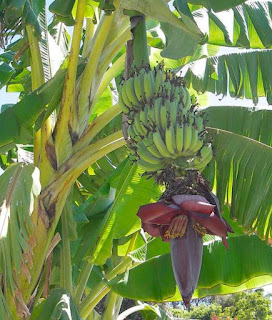 So while the banana tree is growing up, it sprouts baby "pups" out of the base of its trunk.  These pups then grow up to replace the parent tree.  You can also cut off these pups and transplant them.

This is my tree (it has two pups already).  Expecting (hoping for) bananas by the end of the year.  Hopefully the garage will be done by then.  Sigh. 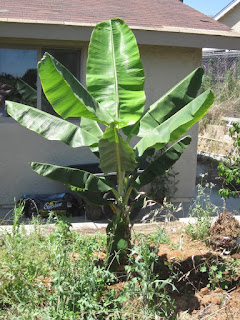