Well, there has been some progress—good progress, really—just not fast progress.  Trenching in concrete is not something that flies.  But this is where I am: 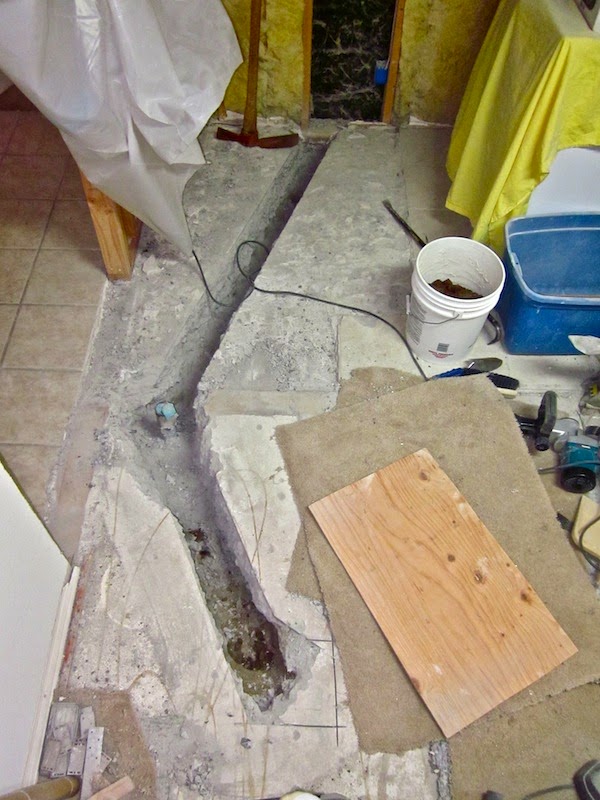 That stud compartment in the back (the black segment, without the yellow insulation, is where the drain pipe for the washing machine will go.  The 2" ABS drain pipe will go down through the bottom of the wall and run along the trench, and then empty into the vertical pipe (in the middle of the trench, where it makes the turn).  Unfortunately, that vertical drain pipe is located in the foundation wall, meaning it's encased in concrete half-way to China (or at least as far down as I need to go).  It has to be cut off maybe 18" below the floor level in order to make the necessary connections.  Slow going.

Partway down that far trench, I have to put in a floor drain that will empty into the washing machine drain; the floor drain is for the condensate from the high-efficiency water heater (the one I haven't bought yet).  At the near end of the trench (not quite finished), there will be another floor drain; this one for the air-handler condensate drain, as well as the water softener back-flush drain.  All of this will be clearer as we proceed (in a month or six).

Much of the slowness has been due to the fact that the back (long) part of the trench had to be blasted out of what had once been the garage floor.  The garage floor was, of course, a concrete slab, maybe 4" thick.  When a prior owner decided to convert the back half of the garage into a bedroom, they had to raise the floor level another 4" or so to match the floor level in the rest of the house.  Meaning—they poured another concrete slab on top of the garage slab.  So I had to trench down through two slabs, one on top of the other.  As I said, slow going.

Unpleasant work, but I've been approaching it as if it was a hobby, a few hours a day.  Cut the boundaries with the diamond bladed circular saw—huge amounts of cement dust.  Blast away at the concrete with my beloved (but heavy) electric demolition hammer—also lots of dust.  Then down on my knees in the room full of dust to dig out the debris and haul it outside by the bucketful.  Knee pads, ear plugs, gloves, full-face respirator, and a hood. 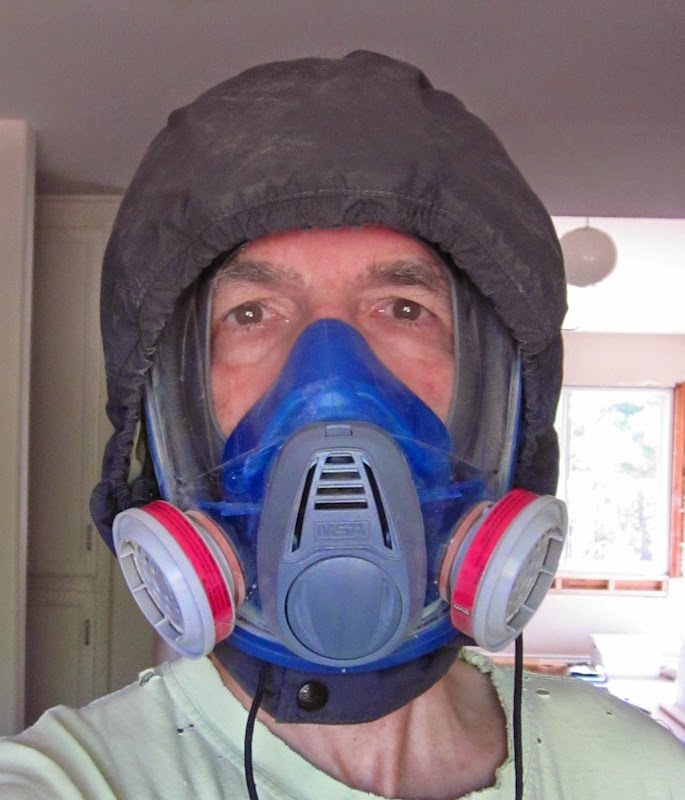 The full-face respirator is incredible!  Highly recommended.  Keeps all the bad stuff out of eyes and lungs, and the faceplate doesn't fog up, even when the sweat is pouring down my face (yes, breaking concrete is good cardio).

Can't keep that up all day—my knees won't take the bending, so I've filled in my breaks with other new hobbies, to wit, designing and building violins.  Well, yes, odd, since I don't play the violin.  In fact, I've never even seen one in person, but I like to learn completely new things.  Interesting community, violin builders are (ain't the internet wonderful!).  The remodeling continues to take up too much space to build violins yet (what with the gutted rooms piled with junk—er, valued possessions—waiting to find their places in the finished house), so I've just been designing. 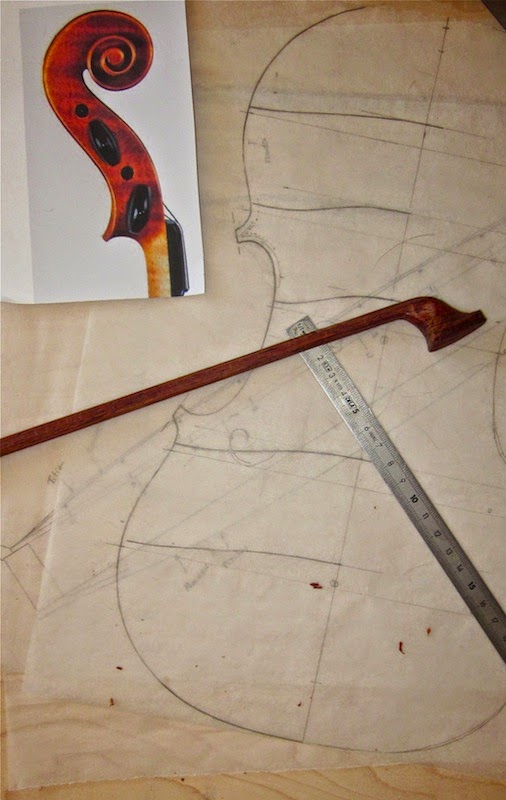 Perhaps violins are not so strange, because I did actually build high-end electric guitars for some years (and I never played those either). 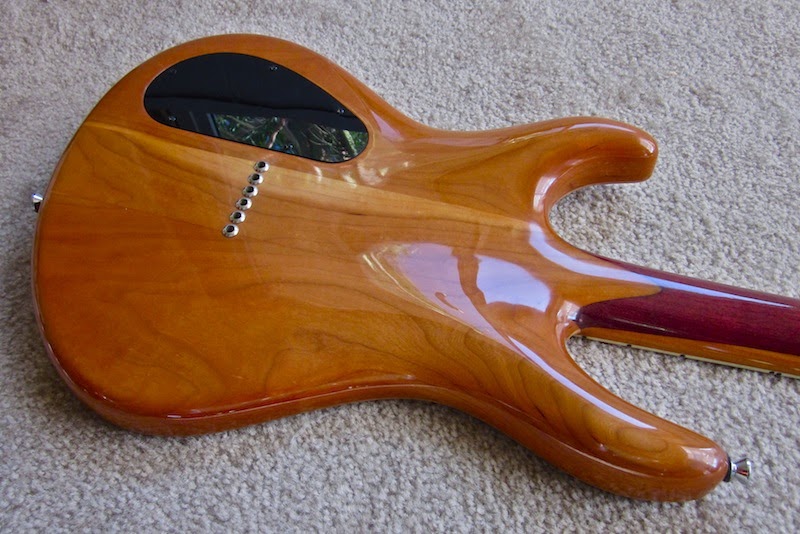 No room to build a violin (yet), but I did just finish building a violin bow yesterday.  That was, how shall we say, a learning experience.  Not sure what I'm going to do with it just yet.

That nice black thing in the bottom photo (called a "frog," with the abalone dot with the circle around it), was store-bought—that I didn't make.  The "stick"—the long part that looks like a stick, is made from cocobolo.  Every other violin bow in the world (pretty much) is a plain straight stick all the way to the back end.  My bow has a "pinky perch" at the back end, over the frog.  Self-respecting violinists, who have been practicing for hours a day for years, have developed pinkies with the strength, dexterity, and coordination to stay on a plain stick without assistance.  When I tried it, no such luck (and I've read that other newbies have the same problem, so the pinky perch is my contribution to violin bow ergonomics).  I expect it will remain a one-of-a kind.  Hmm.

Okay, in the evening I always try to spend some time working on Daughtry's World, my current novel-in-progress and the fourth in the Samsara science-fiction series.  I pretty much have the complete chronological narrative figured out, and the character arcs as well.  I have started putting together the scene outline—in other words, the structure of the novel from beginning to end.  Since this is a murder mystery, the book will most certainly not start at the chronological beginning of the events that led to the three linked murders.  The first scene is to be the assassination of the third victim, during which two of the three assassins end up dead (the victim definitely fought back!)

In the next scene, Kevin Daughtry (the investigator, and past Samsara character), is pulled from his regular posting to investigate the murders.  He doesn't know why they picked him, and his contact (another past Samsara character) won't tell him much.  And it goes from there, with flashbacks filling in the story as Daughtry solves the riddles of the mystery, with a little help from his friends.  It's been slow going for me, but the process should now go faster.

The story will have its own arc, but it will also fill in further pieces of the greater arc of the whole Samsara series (and that world).  My intent is to ensure that Daughtry's World can be read by itself, but obviously people who have read the first three novels in the series will get more out of it.  I try to put a lot of depth in my stories (I want every word to have significance); if a reader skims, he or she will miss much of the experience.  Many may find that a second reading is even more gratifying than the first, especially after taking in one or more of the other novels in the series.

Next time, the laundry room drain pipes go in.
Posted by Chris Llana at 4:02 PM