The new water supply system will consist of a new water softener (there is none now), a new high-efficiency water heater (in a new location), and PEX water supply pipes distributing hot and cold water all over the house (replacing copper pipes).  The softened water will go to two new bathrooms, the new kitchen, the pottery studio sink, and to an outside faucet dedicated to car washing (the hard water leaves white spots all over the car after washing).  Water for the trees and other plants will bypass the softener.

I still haven't ordered the water softener, but have decided it will be a Fleck system (more on that later).  There is enough to do now with the water heater and the PEX pipes that the softener can wait for a little while at least.

I had planned to complete the new pipe installation before switching over the washing machine (now sitting in what will be the master bathroom shower) and the pottery studio sink (which will be the only sink in the house for awhile), but the plan is now to make temporary connections for those things.  That will take the urgency out of completing the system.  And yes, maybe there needs to be some urgency, but I'm supposed to be retired.  And I don't want to wait any longer for my washing machine to be in its permanent position, and a sink in the pottery studio (my temporary kitchen) will make food prep and cleanup easier.  And with the washing machine out of the shower, it will be a lot easier to run the pipes and install the shower valves. 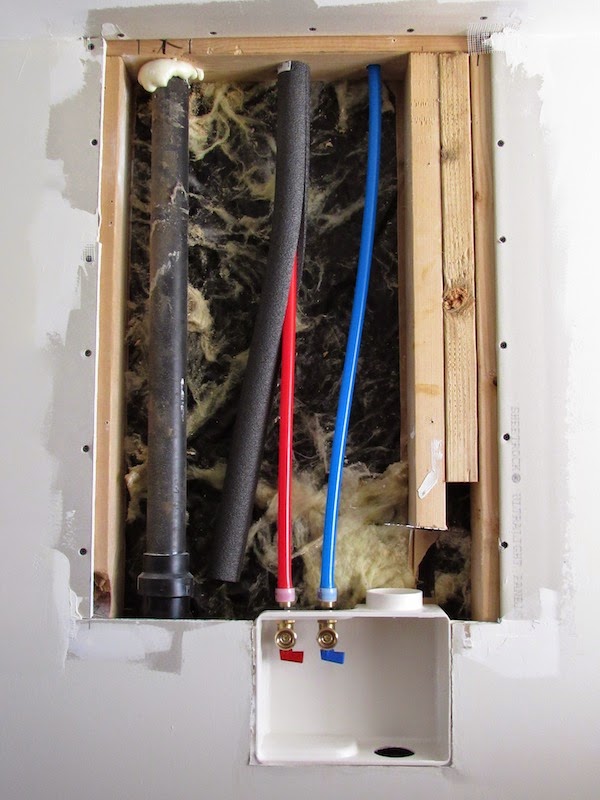 And here is a photo of the outlet box, with drywall finished and painted, and the included trim ring installed (and note the opening for the washing machine's discharge pipe): 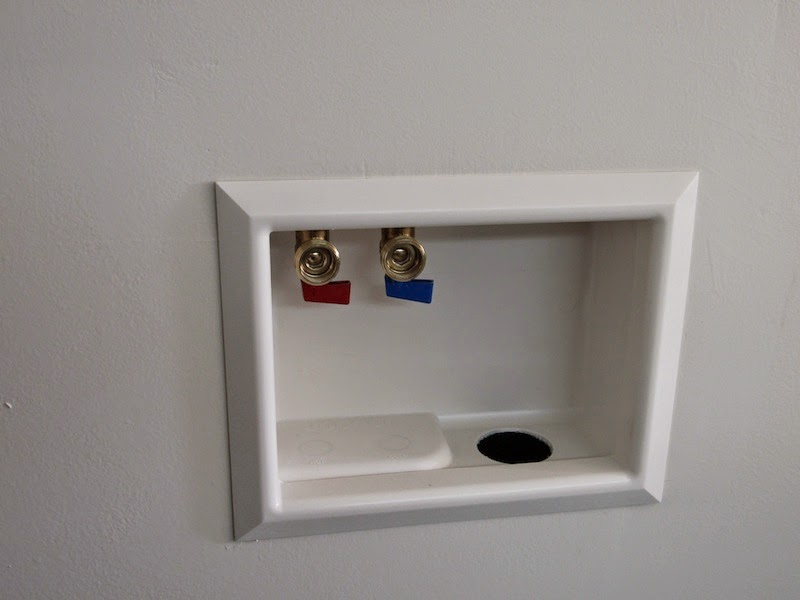 In the last post you saw the new water heater sitting in place.  Due to the earthquake risk in California, it has to be strapped to the wall.  I built "saddles" to help keep it in place, here under construction: 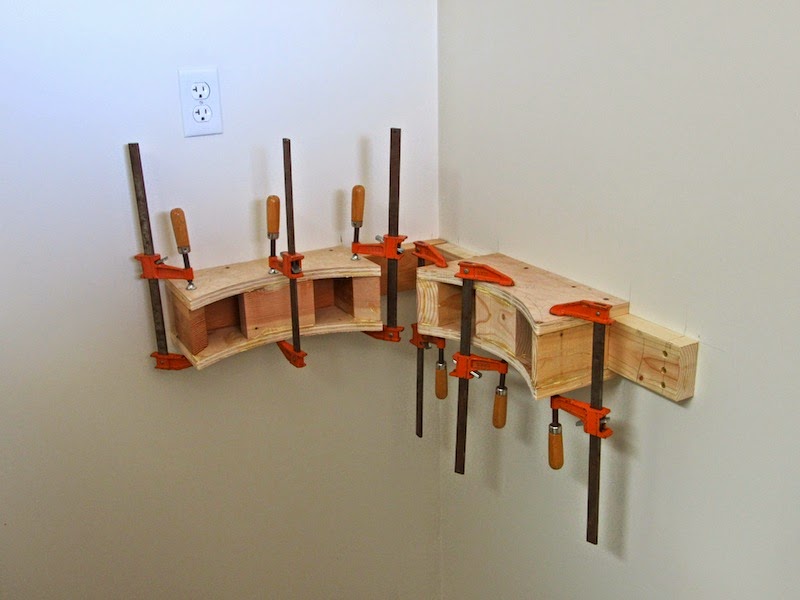 Here is a photo of the water heater with the metal strap in place, as well as new 2" PVC pipes running up through the ceiling.  They bring in outside air for combustion, and take the just-warm exhaust gases out through the roof.  You can see the electric blower fan on top of the water heater.  It's an extremely efficient unit.  I've temporarily screwed on the color-coded cold and hot flexible stainless-steel water pipes to the top of the water heater (just in case you were wondering about those red and blue things). 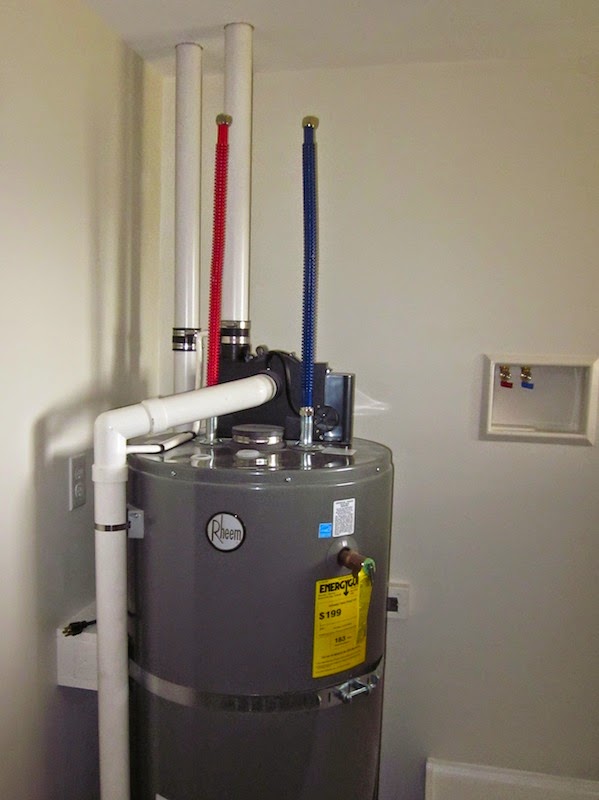 The 2" PVC air inlet/exhaust pipes run up through the roof, but they are too close together coming off the water heater, so in the attic, I inserted a couple of 45˚ elbows to put more distance between them.  Of note, I had to order these elbows and the ones I needed for the top of the pipes from amazon; ABS use is customary out here, and Home Depot's selection of PVC fittings was pathetic.  You can also see the black ABS vent pipe in the photo. 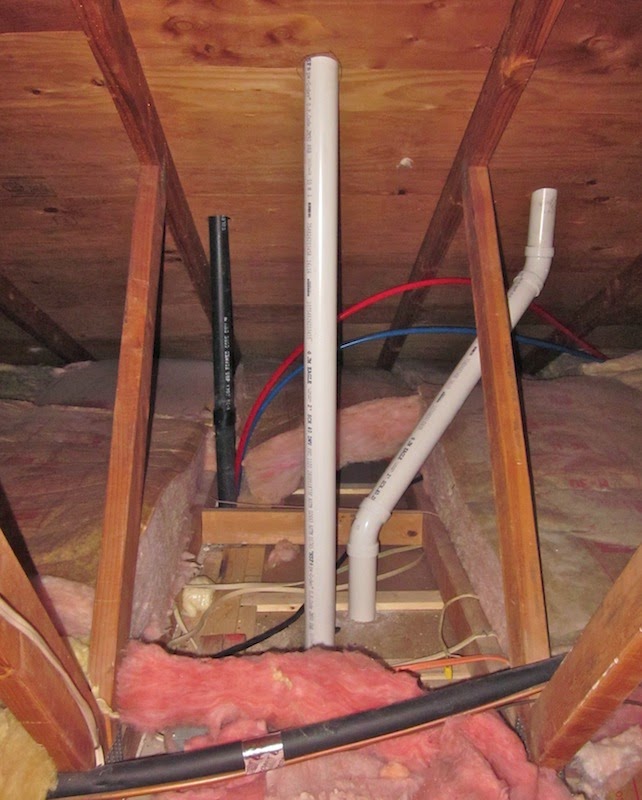 Up on the roof, the pipes give the appearance of a spaceship.  The water heater was supplied with special end elbows with wire mesh inside to keep out the birds, and the inlet pipe elbow came fitted with a "wind vane," no doubt to prevent undue pressure fluctuations from strong winds blowing past the opening. 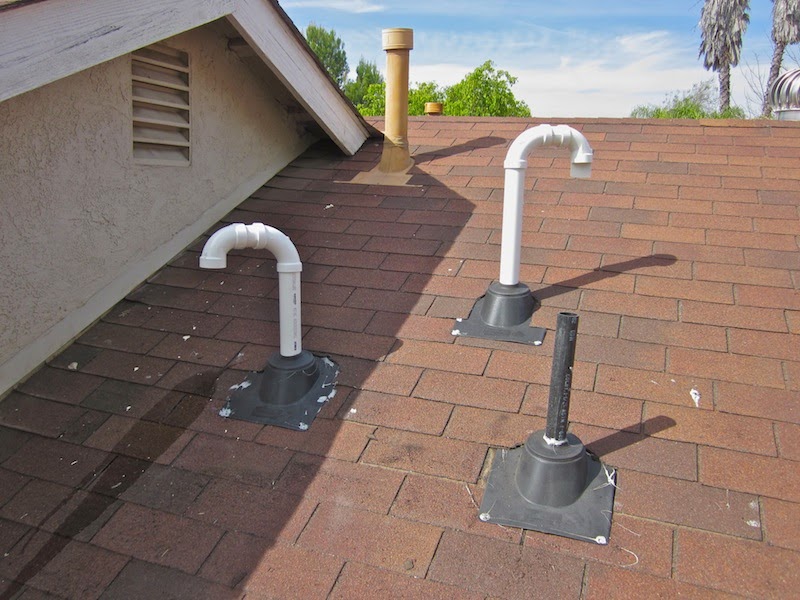 The dark stain under the left pipe opening came from my open can of PVC cement falling over.  The shingles are about due to be replaced, something I will do after the rest of the house is done.

At the end of the last post, as I was starting to build the cabinet for the pottery studio sink, you may recall my plywood had delaminated (Home Depot gave me a full credit).  I had more delivered, and started over.  This is the cabinet under construction in my garage (the car banished to the driveway for a couple of days). You can see the old water heater strapped to the wall in the background, up on its mandated platform (I suppose because it has an open pilot light, and gasoline fumes were probably common in garages at one time, concentrated down near the floor).

Because of its odd shape, and because much of this cabinet will be open, it has a frame of solid lumber (rather than more typical monocoque plywood construction).  It doesn't look pretty now, but it will be covered with painted cabinet-grade plywood and birch trim.

It's pretty big, and already heavy at this stage, so I decided to move it to the pottery studio to finish it before it became too wieldy.  Here it is on a dolly for the trip around the back of the house to the west side door. 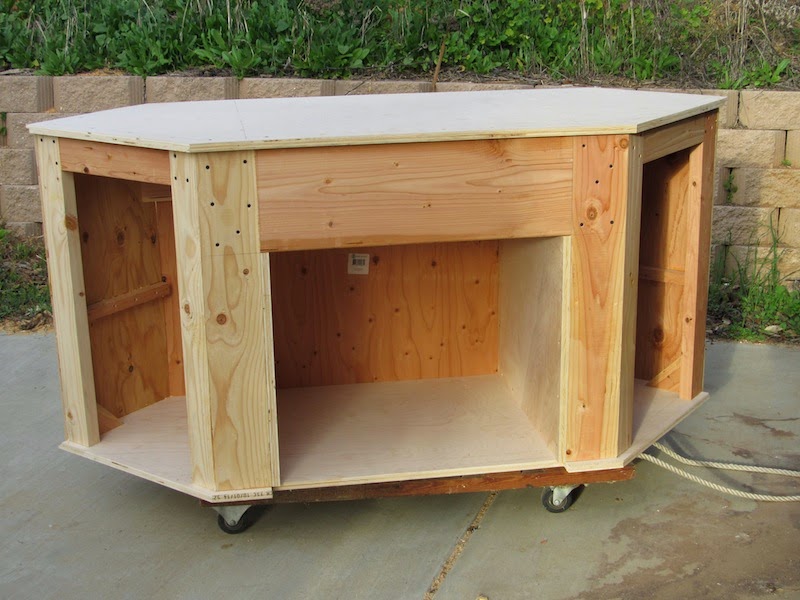 And with a little more work, it's in place in the pottery studio.  It will have conventional sink cabinet doors in front; the side openings will each get a mid-level shelf (and will stay open).  The top will get another layer of plywood, covered with white plastic laminate, and of course, an opening cut for the sink. 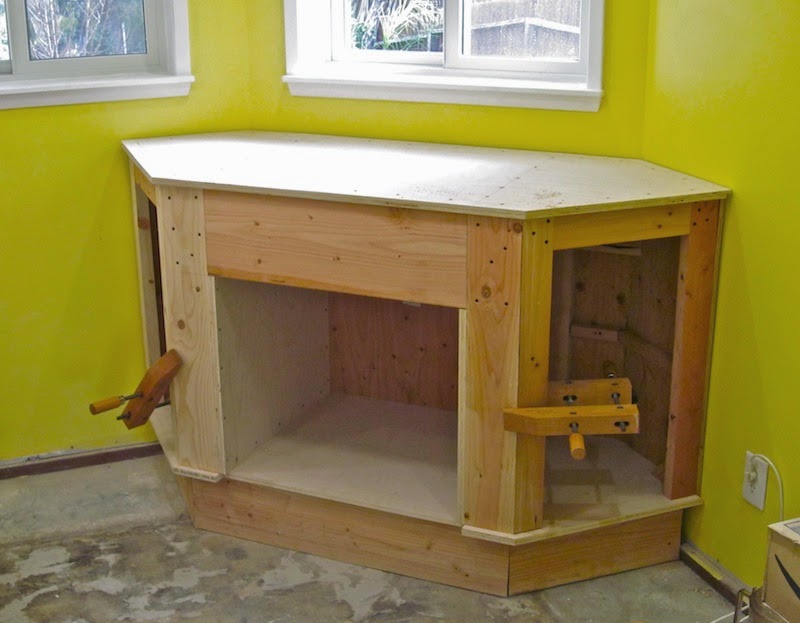 You may be wondering (or not) why this cabinet is part of a water system post.  Well, the pottery studio sink (black granite) is now temporarily in the new kitchen (in a temporary cabinet), and is blocking the wall where the new PEX lines need to go for the new kitchen sink (undermount stainless) and dishwasher.  So the water supply line installation cannot move ahead (much) until the pottery studio sink becomes operational.  Don't worry, the topic will come together quickly—this post covers the preliminaries—call it an introduction, if you would.

This next little bit has nothing to do with the water system, but it had nowhere else to go (it missed the "Miscellaneous" post).  With the delivery of plywood from Home Depot came more drywall, some of which went up quickly in the main hallway.  Here's the before and after: 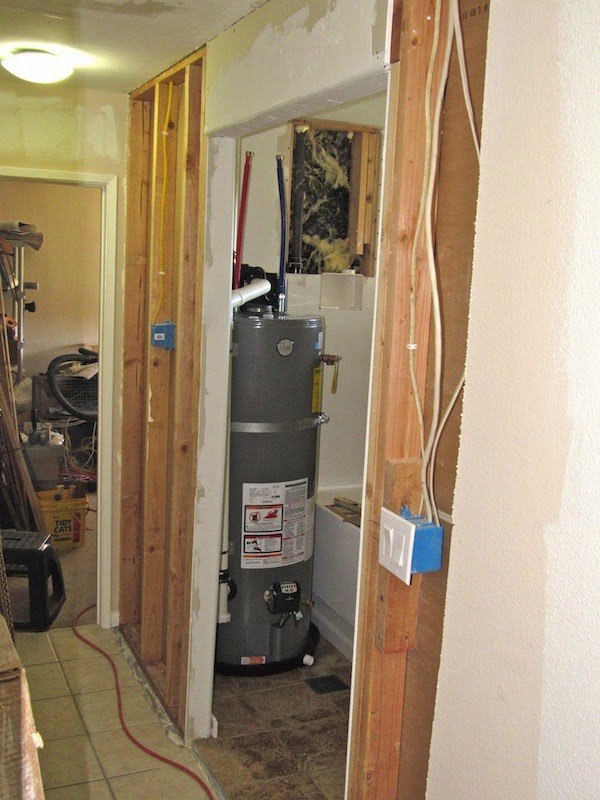 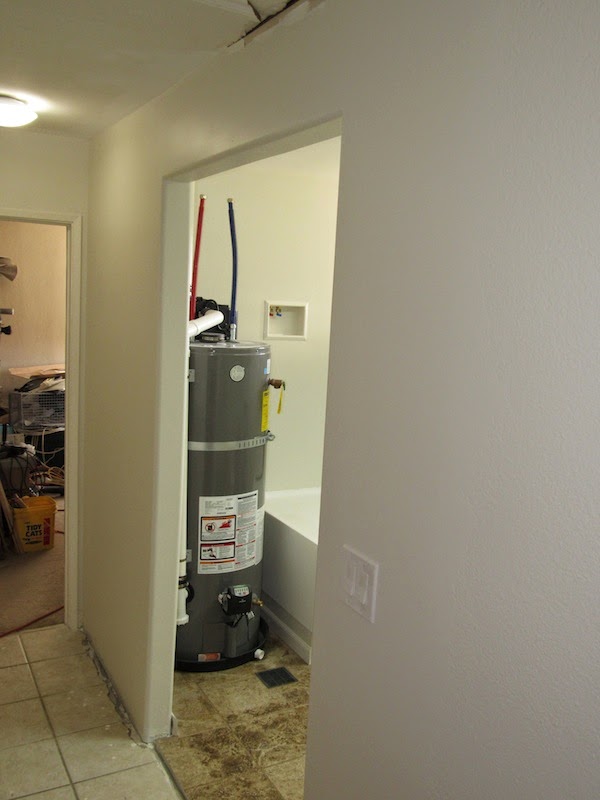 I will continue work on the sink cabinet, but I really need to start ordering more supplies:  PEX plumbing fittings and pipe, plastic laminate for the sink cabinet top, the water softener, etc.  I am also feeling an urge to build some more kitchen cabinets, so I need to order the five-foot-wide commercial stainless steel countertop that goes next to the oven (because I need the exact dimension before building the cabinet that supports it).