When we left off last time, I had ordered more tile for the new kitchen floor.  Well, the tile was delivered to Home Depot after ten days or so, but a lot had been broken in transit (UPS), so they suggested that those tiles be returned.  They also suggested a special order directly from the tile factory (to avoid breakage), that would be delivered directly to the store along with the tile the store ordered for their own stock (to avoid breakage).

The expected delivery date was about a week, but that ended up being more than two weeks, and then that new order contained a fair amount of broken tile, but I took it anyway.  It also turned out that they accidentally ordered the non-skid version of the tile, which contains little bits of black grit in the clay.  So it didn't match what I already had, but close enough.

So I adjusted, created a passable pattern and forged ahead.  Here's the tile starting to go down—over thin-set mortar spread with a notched trowel.  You can see the slash of new concrete running across the floor where I put in the drain pipe for the sink. 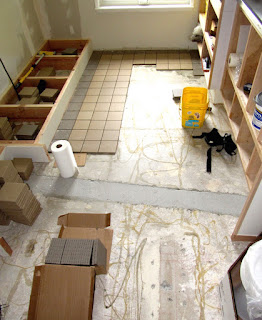 Here's a photo of the tile stuck to the floor, sans grout.  I put down the tile in four batches over the same number of days, so I could walk on the tile I put down the day before while putting down the next area.  The area of bare concrete at the lower right is where the refrigerator will go; the plan was to use the old tile without the grit outside the single ring of non-skid gray tile.  But I ran out of that plain tile, and so had to order more.  When it eventually came, it was a lighter shade, so I ended up using the gray tile with grit there (but that further delayed completion of the floor). 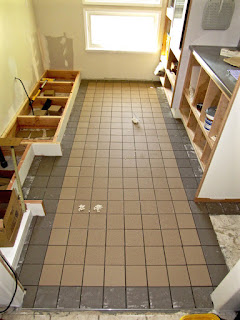 Here's a photo showing grouting in progress.  I started at the far end and worked my way to the foreground (again, one section per day).  The tile in the foreground has had the grout pressed into the gaps, and then the excess scraped off with the edge of the grouting float.  After ten or fifteen minutes (time to clean tools and mixing bucket), I cleaned off the excess grout from the surface of the tile using big sponges wrung mostly dry, finishing with sponges rinsed in a bucket of clean water. 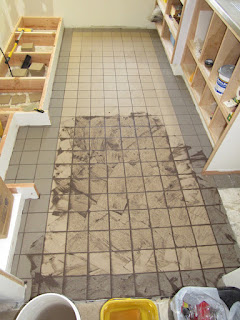 Here's the finished floor.  Most of the baseboard has also been installed. 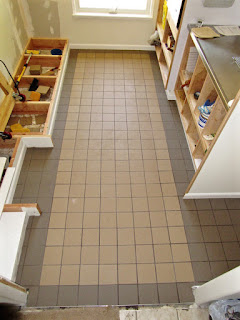 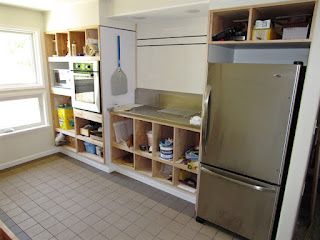 So the kitchen is coming along nicely, and you might think I would just build the cabinets for the other side of the kitchen, order the Corian countertop, and have my official kitchen sink and cooktop (and dishwasher).  But no, that would make too much sense, from a logical perspective.  But alas, no cabinet-grade plywood in the garage (more would have to be ordered).  Instead, I have drywall and ½" sheathing plywood in the garage that is taking up my storage space, as well as boxes of Andersen windows here and there.

So now that I have moved the refrigerator out of the pottery studio, I have room enough to restructure the front wall in that room and install the new windows there.  The old windows are single-glazed with flimsy aluminum frames, and no interior trim (just drywall).  Getting rid of all of those, including the tall, narrow side windows.  The new windows are the same as in the kitchen—a small picture window over an opening awning window.  Inside and outside views follow.  Obviously I need to relocate more stuff . . .   Outside, the wide white trim and fake masonite shingles will be gone! 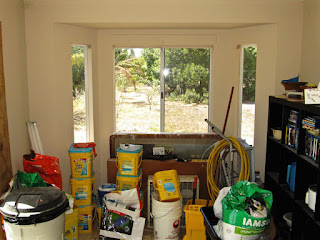 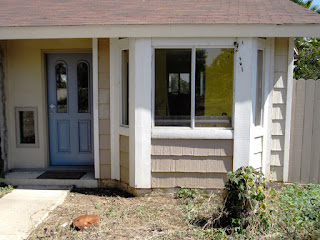