Okay, so you were expecting that this post would be about the new kitchen countertop (because that what I said was next), and I really thought it would be.   I did go to Home Depot and order the Corian countertop, gave them a diagram and all the details, and paid them in full.  They said their subcontractor would contact me within a day or two, but that didn't happen for four days, and then the subcontractor didn't seem to have any of the information about the countertop that I had given to Home Depot.  They asked: was this counter for a kitchen or a bathroom, among other things!  (I know Home Depot gave them the information; they just ignored it.)

They also said they would not be able to come out and measure for three weeks!  Disenchanted, I looked up the customer reviews for installed countertops on Home Depot's web site.  The reviews were for all over the country, but the reviews for the local installer were mostly one star out of five!  And one review said they would have given them zero stars if that had been possible.  Lots of nightmare stories.  Incompetence, indifference, lack of ethics.  Botched work.  One review said it took three weeks to get measured, and then another twelve weeks before the counter was actually installed—and even then there were installation problems.

I did not want my own nightmare story, so I cancelled.  I looked at some other countertop contractors, but did not find any that gave me a warm feeling, mainly because I could not find online reviews for most of them.  So I'm going to wait, maybe until January.

In the meantime, my work has been divided over a bunch of projects.

Scraping and painting the eves and fascias outside of the new shop.  Finishing the baseboards in the pottery studio.  More electrical and lighting work.  More work on the PEX water supply lines.  As the title of this post suggests, I'm trying to focus on the master bathroom.  But as the master bedroom shares electrical circuits (for both lighting and receptacles) with the master bathroom, I've also been working on the bedroom.

So where to start?

I wanted to make some visible progress on the shower.  The first step was to install the shower pan, but, well, there was the little matter of the drain coupling.  Way back when I was installing a new drain pipe for the shower, I assumed the drain fitting would be glued inside the 2" drain pipe.  Nope.  The Schlüter KERDI shower system kit I subsequently obtained supplies the pan and drain coupling, and the latter slides over the outside of the drain pipe.  The instructions suggest that for concrete slabs, a 4" sleeve be placed around the 2" drain pipe when the concrete is poured, leaving a gap for the drain fitting.  That would have been nice; what I've got is concrete right up against the drain.  Oops!

Here's what the drain fitting looks like, underneath half of the shower pan (held up so you can see what needs to go below the surface of the concrete). 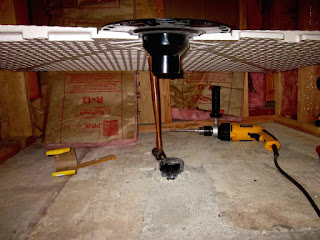 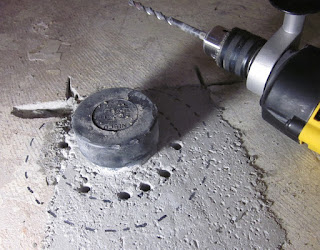 It hasn't been working very well, so I've been ignoring it.  When I decide I have to get it done, I'm thinking of getting my little jack hammer out again, and blasting out the concrete, setting in a 4" diameter sleeve, and pouring new concrete.  Sigh.

In the meantime, there was plenty of other work to be done in the bathroom.  For one, running electrical cables and installing boxes for the receptacles and lighting.  Three separate lights, each with its own switch, and two receptacles.  And in this photo, hot and cold water lines for the sink. 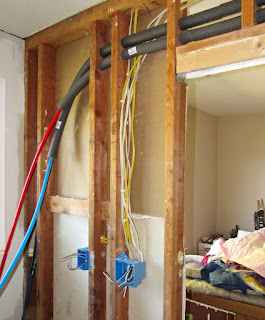 I also needed to extend the wiring to two receptacles in the adjacent bedroom, and to the bedroom lights (three recessed cans in lieu of the old ceiling fan light).  Before I could do that, I had to remove a small partition wall next to the door (example of small job escalating). 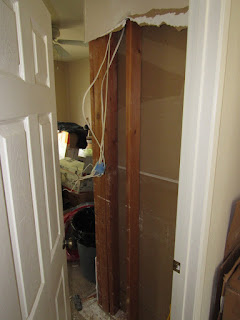 So that wall is now gone and a new wall switch box installed and cables run.  You'll see photos later.  This photo below shows more wiring for the overhead shower light, and the PEX water supply lines (hot and cold) for the main shower valve, and the lower secondary (identical) dog shower valve.  That valve feeds a quick-release hose fitting, to which a short length of garden hose with a hand sprayer is connected—very convenient for giving the dog a shower with warm water year-round.  You'll see more on this later.  The photo also shows some of the insulation going into the walls around the shower (to retain heat); the whole bathroom will be insulated.  Oh, and I've installed heavy backer boards where the two grab rails will be installed (thinking ahead to when I'm old and decrepit :-). 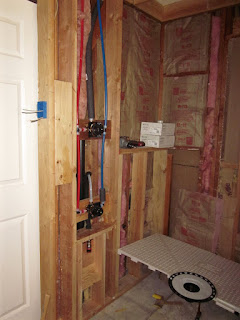 So all of these wires and PEX lines run up through the ceiling into the attic.  It gets hot up there when the weather is warm, and during the last few days the temperature has cooled enough for attic work to start.  As I've mentioned before, it's not a nice place, and nothing gets done quickly up there. 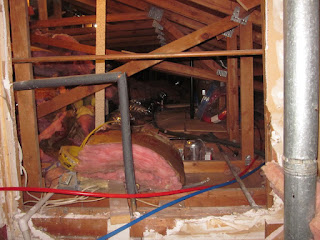 The photo above shows the main part of the attic, taken from the garage part of the attic through a large hole I opened up in the partition (after installing a reinforcing beam).  The copper pipes running across the opening will be removed after the new water supply system is operational.  And right in front of this opening, in the garage section of the attic, is an open-at-the-top void space: 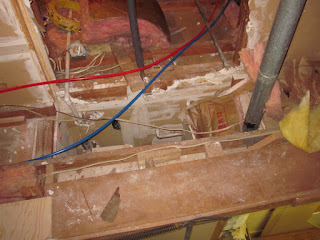 This space may have been intended for the furnace (now in the attic, originally in the garage) or the hot water heater (now in the garage), but for whatever reason, it was sealed up on the ground floor.  It will eventually be a closet for the master bedroom, but for now, I have to structurally close over the top before I can run PEX water lines over it.  More on that in a later post.

I have located and started to put in structural elements to support the water supply manifolds at the heart of the water distribution system.  Those manifolds will go in this part of the garage attic, roughly over the water heater and washing machine.  Not real pretty now. 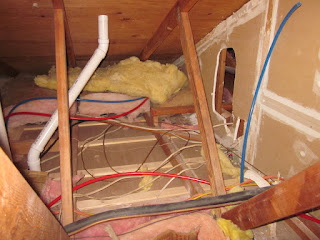 In the photo below, the longer assembled manifold is for cold water, with a 1" line coming in from the water softener, and 1", 3/4", and six 1/2" water lines connecting.  The line at the end of the cold manifold goes to the water heater; the water heater outlet goes into the hot water manifold (the shorter one in the photo). 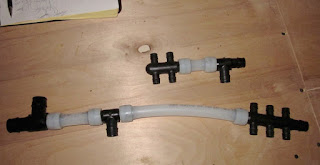 Not all work here.  On warm days when I need to go to Trader Joe's, I sometimes continue down the coast to the dog beach for a nice break (both for me and Sophie). 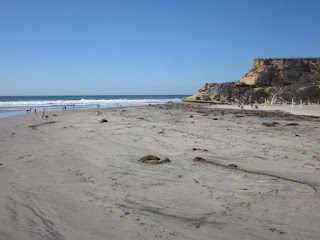 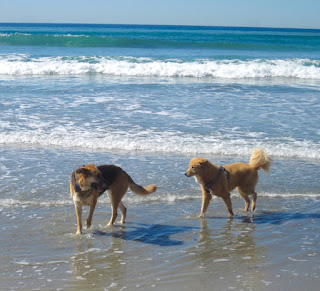 Next post?  Who knows?  Probably more of the same.