I’m now working on the new master bedroom, master bathroom, and new water supply system (mostly in the attic), all concurrently.  For the sake of clarity, I’m going to do separate posts on each of those over the next few months (more than one post each).  Since I’m starting to focus mostly on the bathroom and water supply lines, this post will be about work to date on the bedroom, and the complications associated with its expansion.

The master bedroom that came with the house, as you may recall, is now the home theater.  I’m turning one of the other smaller bedrooms (12’ x 9’) into the new master bedroom, by connecting the original adjacent communal bathroom directly with the new master bedroom (with a pocket door), and by moving one of the bedroom’s walls by two feet (into the garage), making the bedroom large enough to accommodate my California queen size waterbed (longer than a standard queen).  The expanded bedroom will be 12’ deep by 11’ wide.

Here is the original floorplan, and the new plan: 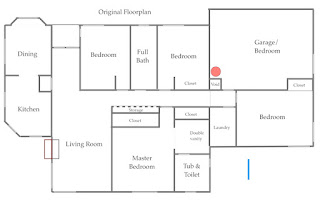 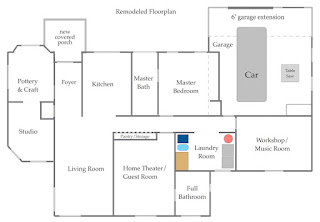 Working on the new bedroom, and considering the incursion into the garage, I had to make some decisions (now) about the future of the garage.  Here is a photo of the area in the garage that will be annexed by the bedroom.  Note the old water heater that will be removed when the new water heater takes over (the wall therefore can’t be relocated until the new water system is done).  When I said I planned to take over two feet of space, that is actually between 20” and 25”, depending on how I deal with the constraints, and when. 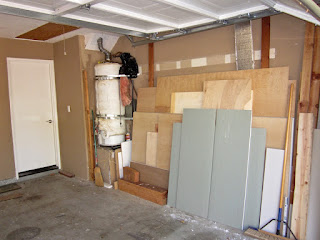 Back to the bedroom work already accomplished.

I had mentioned that I removed the short partition wall, started here: 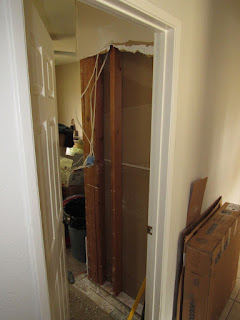 This shows the scars left from that operation. 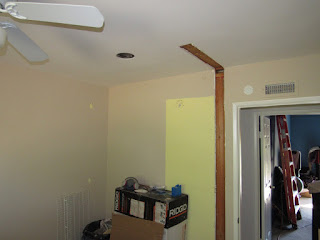 This next photo shows the result after patching, and adding a new light switch and receptacle, and paint.  I also patched the ceiling where the ceiling fan had been, and added three recessed lights (each with a 10.5 watt LED flood light—very bright; I will need to add a dimmer before moving in the bedroom). 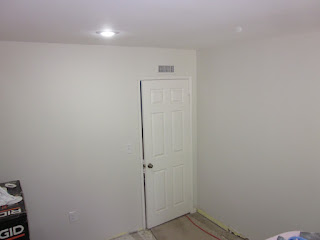 The north wall of the bedroom also needs work, a complete restructuring to remove the old single-glazed sliding window, and add two high-efficiency Andersen casement windows.  The next two photos show the wall before and after removing the drywall. 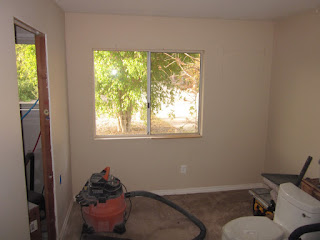 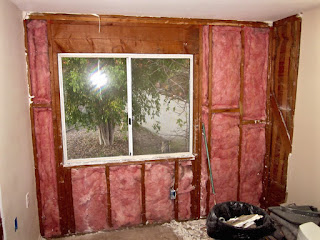 No more immediate work on that wall until we get a bit of warmer weather (which could be mid-January; never know around here), because the wall must be removed and a new one built, leaving a very large hole in the house for a day.

Next post will be about the master bathroom; I’ve installed the pre-fab shower pan and will start putting cement backerboard up on the shower walls.
Posted by Chris Llana at 9:41 PM