This is an update on progress on the master bathroom, which has been my focus for awhile, and that will continue.  It's nice to do work you can see at the end of the day, versus work on water supply lines, electrical, and insulation in the attic that is out of sight (but very important, of course).

When last I reported on work on the shower, I had taken a break after struggling with intractable concrete work (I thought I had been done with it!).  As you may recall, the drain piece that came with my shower pan kit had to connect with the 2" drain pipe a few inches below the surface, and needed a nominal 4" diameter hole around it for clearance (or so the instructions said).  My initial attack looked like this: 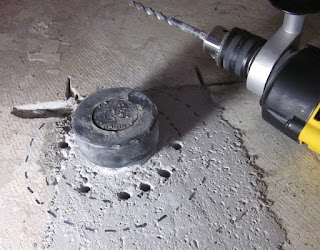 Trying to dig out the concrete with a cold chisel and hammer wasn't working, so it was back to the brute force method of cutting out a big hole with the old diamond-bladed circular saw. 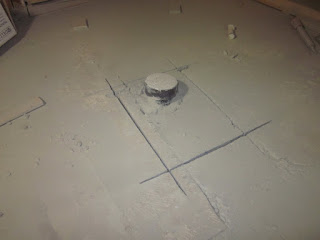 You'll note the thick dust, that, notwithstanding my best countermeasures, spread a thin coating throughout the rest of the house.  Full-face respirator required while sawing the 2" deep cuts.  Then attack with the 20-pound electric demolition hammer. 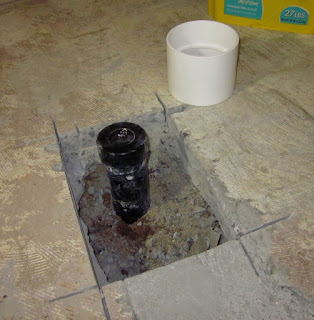 The resulting hole was big enough to saw off the drain pipe 2.75" below the surface, using a shortened hack saw blade.  You'll note the 4" diameter sleeve in the photo above, to be placed in the hole before pouring new concrete to provide the requisite clearance around the drain pipe. 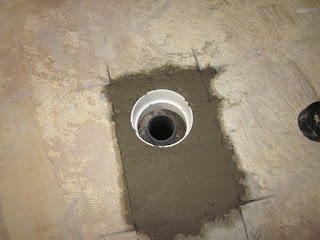 But oh, they lied!  Four inches was not quite enough.  So attack with a router and straight-cutting bit to remove some of the white PVC sleeve. 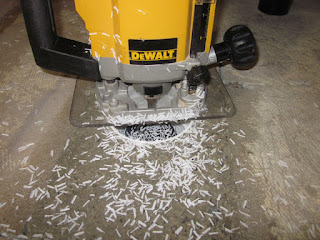 I was now ready to install the tapered high-density plastic foam shower pan, after spreading thin-set mortar on the concrete floor (using notched trowel).  Easy-peasy.  Then after insulating the walls around the shower (to keep heat in and noise abatement), the cement backer board started going up.  Special screws used. 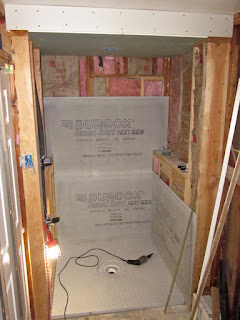 The ceiling doesn't get tile (just paint), so moisture-resistant (green) drywall was installed there (after more insulation).  The six 3'x5' sheets of 1/2" cement board I had went fast, so I turned to filling the walls at the other (vanity) end of the bathroom with plumbing, electrical, and insulation. 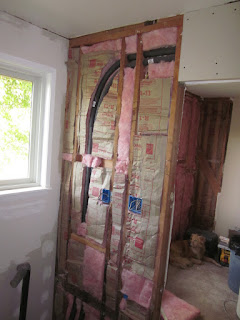 A couple of stainless steel grab rails are going in the shower, and those must be attached with long screws anchored in solid wood (no drywall inserts for that).  So that reinforcement was added before the cement board went up, and yes, it will be nice to remember where that is after the tile is all on, so I measured, wrote the measurements on the wood, and took photos.  Documentation. 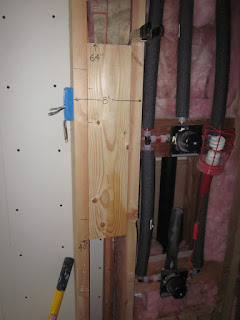 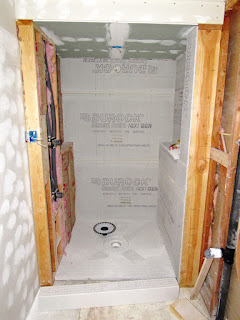 At the left of the photo, the side wall has been covered with drywall; it has a lot of screws in it covered with smudges of joint compound.  That's because it is not screwed to a solid stud wall, but rather to a pocket door frame—somewhat flimsy in a wall that's just 4.5" thick with room for a door inside.  So on both sides of that pocket door frame, I've screwed 3/4" plywood to the back of the drywall.  That stiffens the wall a lot, and on the bathroom side, will allow me to screw towel racks into something solid.  No drywall inserts here either.

This next photo is of the other end of the bathroom—the vanity end, the outside wall end, the window end.  The drywall is up and painted.  I did this early so I could install receptacles and switches in the electrical boxes, so I could use them during the construction. 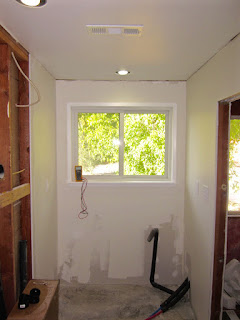 I also painted the ceiling, so I could finish the heating/cooling register (new duct installed in the attic), and the two recessed lights (no trim rings yet).  I'm going to put up crown molding in the bathroom (nowhere else), just for fun.  The two lights are on dimmers; one also motion controlled. 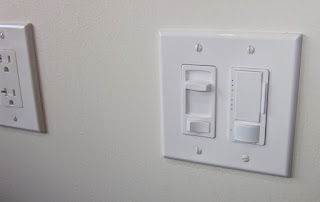 The fourth wall still needs a mess of plumbing; I placed an order from SupplyHouse.com today to do that—that's where I get all my PEX materials.  Home Depot sells some PEX stuff, but it's for the crimp connection method, and I use the expander method, which requires special PEX-a tubing and ProPEX fittings. 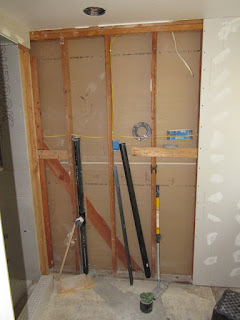 I also bought more cement backer board today, so I can finish covering the shower area.  I need to go shopping and make some decisions about tile details.  Cement board will also go on the bottom half of the wall in the photo above (after plumbing is done), where tile will go.  Paint and regular drywall goes on the top half.

The heavy base for the vanity cabinet goes in soon, and I may just build that cabinet while I'm at it, since I have the plywood on hand.  We'll see. . .