I don't think there was actually a Guest Bathroom — Part 1, but I did previously move a wall, insert a pocket door, and replace the window over the tub in that room, so it didn't seem right to call this Part 1.  And why am I working on the guest bathroom anyway, when I once (or twice) said it would be the last project in the house remodel?

First, I guess because it's the only working bathroom in the house, so it's not like I can ignore its primitive condition.  Second, because I started to work on the new water supply system (again), and felt the need to run the new water supply lines to that water-intensive room.  Third, I wanted to get the last of the heat/AC ducting installed in the guest bathroom—a prerequisite to getting the new heat pump and air handler.  That bathroom register is going in a soffit above the future vanity, and the temporary water line to the toilet (hanging through the ceiling) prevented that installation.

These are the sorts of motivations and hurdles that one encounters in a whole-house remodel.  Sigh.

This is the new wall I built separating the new guest bathroom from the new laundry room, built about 1.7 years ago.  The piece of plywood on the wall is actually what the electrical sub-panel is mounted on (the other side), recessed into the wall.  On the left, you can see the new hot and cold water lines that will feed the new sink; they are covered with pipe insulation, except at the bottom (red and blue PEX).  Hanging down in front of the wall are two electrical cables (to the switch for the overhead light, and to a future GFCI receptacle), and the offending white PEX temporary water supply line feeding the toilet (covered with black insulation toward the bottom). 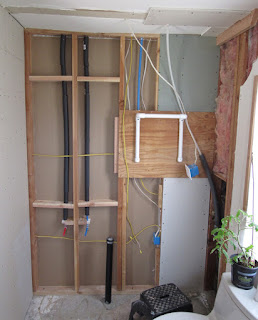 And here's a photo of the wall to the right of that.  Note the newly installed casement window (replacing the old, flimsy, single-pane double-hung window).  The major required plumbing work lies mainly behind the toilet, where the supply line for the toilet emerges (on the inside), and where the same line continues to the outside of the wall for the hose faucet.  This is totally inaccessible without removing the toilet, which is not difficult, but hmmn, time is a consideration.  Lines need to be cut, PEX-to-copper adapters need to be soldered, the wall insulated, and then drywall hung, joint compound applied, and the wall painted — all while the toilet is sitting elsewhere.  Did I mention that it's currently the only operational toilet in the house?  I need a plan — a good, fast plan. 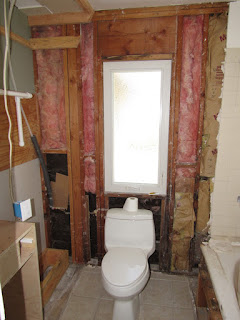 This photo shows where the temporary PEX line was connected into the old copper, so long ago.  Now I need to run TWO lines down through the same bay. 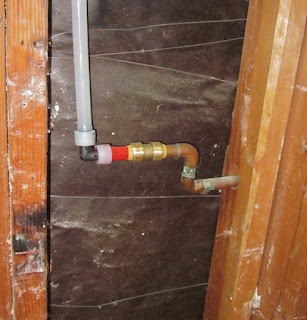 And this is the copper behind the toilet — to be replaced: 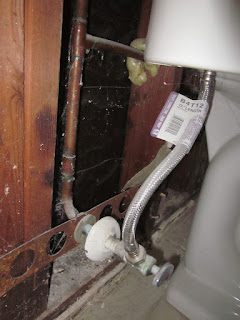 Here's where the water comes into the house (in the garage).  Since the irrigation system was defunct when I bought the house, and its supply branch line has its own shutoff valve, I am going to use this line to supply the hose faucets in the front and back yards.  The water for the house's domestic/inside supply will be pressure regulated and softened. 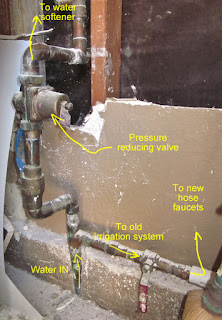 Regarding water pressure, I'm assuming the neighborhood system pressure is too high, hence the pressure regulator.  I just bought a pressure gauge; the "regulated" (reduced) pressure measures 68 psi.  That's high; I've read that optimal/normal household pressure should be about 55 psi, so my pressure regulator may be broken.  If not, I can adjust the pressure with the regulator; of course, there will be some pressure drop through the water softener, so that will also be a factor.  Once I run the new "outdoor" lines, I can measure the pressure upstream from the pressure reducer to get a better idea what's going on.  (The gauge I have screws onto a hose faucet.)

Hard water, soft water?  The water here is hard, very hard.  I recently read that water in the San Diego area is the hardest in the country.  Mineral deposits ruin water heaters and other appliances, inhibit soap suds, make the water taste bad (although I'm now used to it), make clothes and hair scratchy, etc.  Calcium and magnesium.

Water hardness is measured in various units.  Water softeners are typically programmed using the archaic water hardness measure of "grains per gallon" (gpg).  "Grains" are a measure of weight, like "stone" used by the Brits for body weight.  Hmmm.  "Gallons" are less archaic, but still baffling.  Water authorities tend to use milligrams per liter (mg/l).  But I digress.  Soft water is defined as having a mineral content of 0 - 3.5 gpg, moderately hard water: 3.6 - 7.0, hard: 7.1 - 10.5, and very hard: 10.6 or higher.  I just bought a water hardness test kit and measured my water: 26 gpg!  Yikes!

I'll have a whole post on the water softener later.

I just received a new shipment of PEX fittings, so no excuse for no progress.

This post is a mish-mash.  Here's some of the mish and the mash.  The outside of the new Andersen window, before I applied the stucco around the outside: 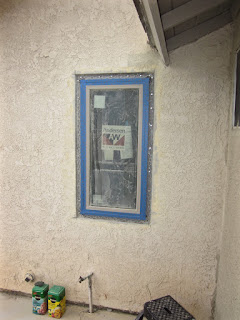 While I was waiting for the PEX parts to come, I worked on vanity carcasses.  This photo shows the one for the guest bathroom, just sitting there (not leveled or fastened); it can't be installed until the pipes go in the wall and the drywall goes up behind the toilet (that wall).  And when the drywall goes up (wall on right side of the photo), I can also finish the soffit and install the heater duct. 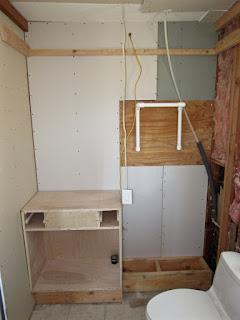 And here is the vanity carcass in the master bathroom, fastened to the base and wall, with supply lines and drain pipe in place.  The front will be trimmed with mahogany — with one door where the cubby is painted white; everywhere else will have drawers.  Like the vanity in the guest bathroom, this master vanity will get a white Corian countertop with integral sink and backsplash.  Once I get those, I can make the sink cut-outs in the vanity cabinet tops. 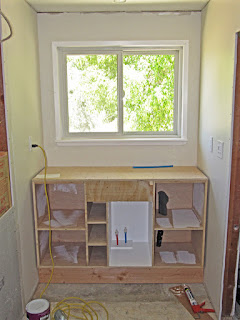 So, near-term, I'll be working on the water supply system, and also hope to resume work on the master bathroom shower tile.
Posted by Chris Llana at 9:10 PM