Last time I was working in the guest bathroom and needed to replace some plumbing that was behind the toilet — my only functional toilet.  For a few minutes I contemplated pulling the toilet and then working very quickly, lest I end up using a bucket.  I quickly came to my senses after realizing there was probably a week's worth of work behind that toilet.  The silver lining in that quandary was motivation — something that had been lacking in my quest to make progress tiling the master bathroom.

The solution, of course, was to bring the master bathroom toilet into operational status.  To do that I merely had to tile the bathroom floor, as well as the wall behind the toilet (at least the bottom half of that wall), which is what I did.

Part 6 of the master bathroom saga left off with the shower floor tiled and grouted; after that, work languished.  I think the problem was that I was having trouble finding the necessary cove base tiles, and then knowing I would have to measure and cut each tile before mortaring it in place, found something else to do.  Much of the shower floor was neither straight nor level, and if the wall tile was to be applied successfully, the base row of tile would have to compensate for that lack of order, so the tile above would go on straight and level.  So the process was tedious, but the only way to get past that was to plod through it.

The cove base tile (lowest row of wall tile) flares out and overlaps the floor tile, so the floor tile needed to go down first.  Like the shower, the bathroom floor tile is a satin-white 2" hex mosaic tile that came in foot-square sheets.  The individual tiles around the periphery of the floor had to be cut to fit (although mostly while they were still attached to the mesh backing).  Also, the sheets would not always align precisely, so some single tiles had to be pulled off the mesh and slightly moved to split the difference in the uneven gaps. 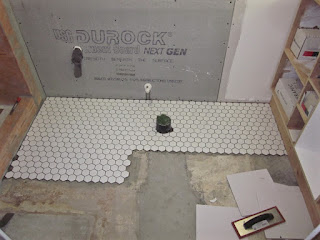 Here's with all the tile down, but not yet grouted.  I would have liked to have glued the marble threshold down first (across the doorway), so to run the tile up against that edge, but no threshold yet, so I tiled up to a line on the floor. 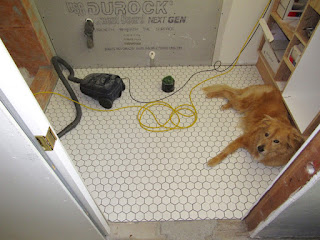 With the floor tile finished in both the shower and main floor, I started on the cove base in the shower, and then moved to the bathroom proper.  The blue tape is supposed to keep the mortar off the finished floor. 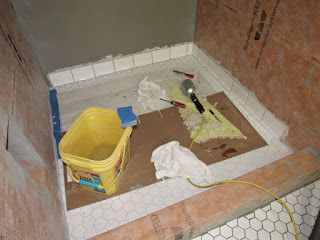 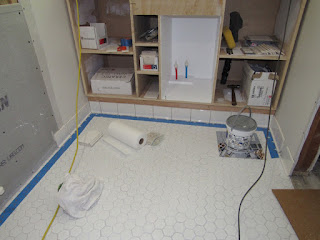 Once the cove base was installed, I moved to putting the 3" x 6" subway tile on the wall, using plastic spacers to keep it even.  I did this in small batches, because the process was somewhat tedious — marking and cutting tiles, mixing mortar, putting tiles on the wall, cleaning tools, and then coming back and cleaning the excess mortar that often squeezed through the gaps and otherwise stuck to the surface.  Then I would let the mortar harden overnight and repeat the process the next day. 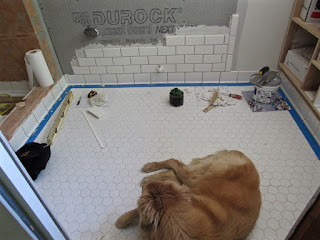 This next photo a bit further along, showing the temporary spacers.  I want to mention an issue with doing a bathroom in white.  There are many colors of "white."  I bought the subway wall tile from Home Depot and some of the trim tile from Lowe's, because Home Depot didn't carry all the types of trim tile I needed (e.g. the cove base tile).  The small "white" hex floor tile was ordered from HomeDepot.com (not carried in the stores); it turned out that tile was "whiter" than the wall tile, which skewed to off-white, although you could not tell looking at either one separately.  At first, the difference was distracting, but I'm getting used to it and don't notice any more.  Things to consider. 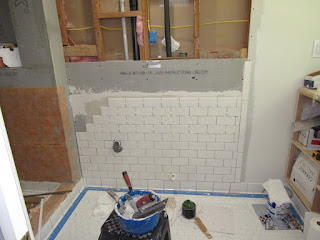 You may have noticed the 4" black pipe jutting up from the floor.  That's the drain for the toilet.  I left it long so I could tile and grout right up against it.  Once the floor was finished, I cut it off flush with the top of the tile, using a special compact hack saw.  Then the ABS toilet flange could be cemented into the pipe, so the bottom of the flange was flush with the floor. 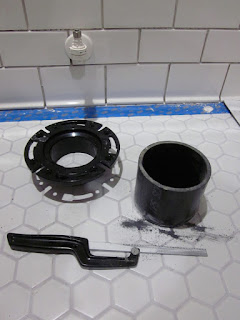 Although the flange was a nominal 4" and so was the pipe, the fit was apparently a little too tight.  Ordinarily the dry fit is a little tight when joining ABS or PVC drain/vent pipe, but when you apply the cement to both halves, it dissolves the upper layer of plastic and the joint slips together cleanly before the cement bonds the two together (within a very few seconds).  Unfortunately, when I applied the cement to the flange and pressed it into the pipe, expecting it to go to the floor, it only made it halfway there and stopped.  I immediately yanked it out of the pipe before it had the chance to become one.  It took a couple of hours of scraping, sanding, and filing before the two would readily slide together.  Had I not managed to pull them apart, it would have taken a day, at least, and the flange would have been destroyed.  Counting my blessings.

Grouting was uneventful, as it usually is.  Here three-quarters of the wall is done (having exhausted the batch of grout I mixed).  White grout for the walls (and a very light grey for the floor). 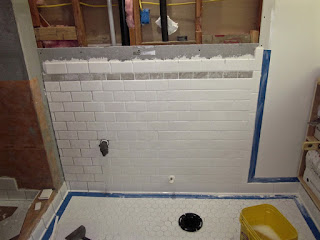 You've undoubtedly noticed that the tile (and cement backer board) only goes halfway up the wall.  Yes, odd.  I still need to finish the plumbing inside the wall before closing it up, and then I will add the rest of the tile (which only will go up another 8"; above that will be painted drywall).  That will be Part 8.  Remember, the point of this was to do enough to be able to install the toilet.

And here it is, fully operational, with the temporary toilet supply lines rerouted in the attic. 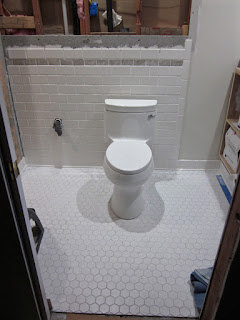 I also got some more wall tile up in the shower, whenever I had leftover mortar from a batch for the bathroom wall tile.  The rest of the job will fill another post, at least; a complex job, it is. 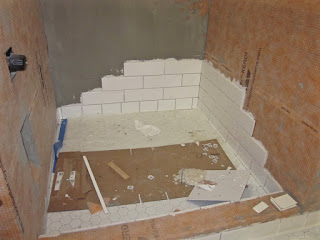 With the new toilet operational, I pulled the guest bathroom toilet out and started work running the new PEX water supply lines for that toilet and the two outside faucets.  When that's done, some drywall will go up, the new window trimmed out, etc.  Those tasks will be the subject of the next two posts . . . probably.