Ah, where to begin?

First, distraction number one.  A puppy has arrived in the household, a new family member.  I've always had rescued dogs and cats, and wanted for once to get a puppy, untainted by abuse and neglect and lack of socialization, and the associated behavioral problems that need correcting with a lot of TLC over a long period of time.  None of that with a puppy.  Oops! 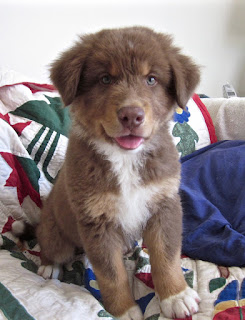 Wrong!  Puppies are great, but they require minding and training and socialization and house training.  And running interference with my other dog and the four cats.  And getting up to take him outside three or four times during the night (and how often during the day?).  And the chewing . . . :-(   But he does help out at Home Depot :-) 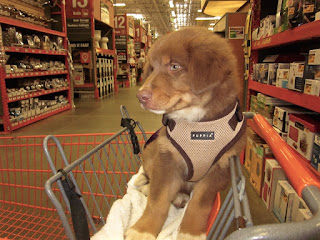 A grand adventure while shepherding him through adolescence!  So remodeling work has slowed.

The vanity Corian countertop finally arrived!  First I measured the sink and cut out an opening in the plywood vanity top. 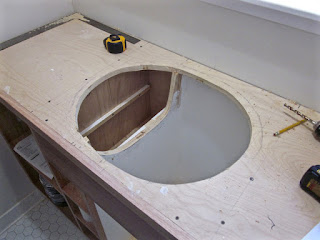 The vanity sits flush between two walls, and as it happens, those walls are not parallel.  Fortunately, the opening is wider at the front, and I had the Corian top made to that wider dimension, which meant I would have to taper the sides (narrower at the back).  That was done with a router and a top-bearing carbide straight cutting bit. 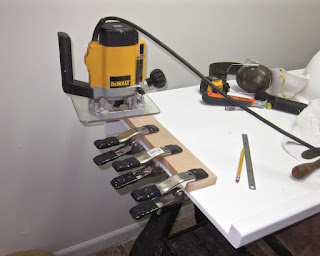 So, everything routed to close tolerances for a good fit.  Unfortunately (again), too close to maneuver the top into position.  I discovered the walls in front of the vanity were closer together by a little bit than they were at the front of the top.  So more router work, and a bigger gap around the top that needed filling with caulk — more than planned, about an eighth of an inch, but acceptable (and more to the point:  unavoidable).

I also had to drill holes for the faucet; the standard holes that the fabricator would have done were too big, so I ordered no holes.  Fortunately, Corian can be worked with standard carbide woodworking tools. 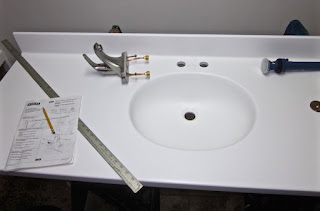 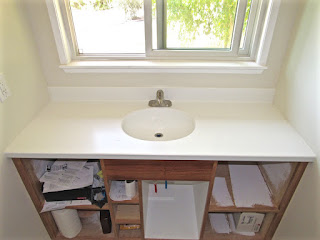 The vanity of course screams out for drawers and a door, and I often anguish for drawers all over the house, but as always, higher priority projects must prevail.

Next, the plumbing for the vanity sink:  24" flexible feed lines for the faucet (had to order from amazon), and the drain connection.  For the latter, I included an air admittance valve to ensure there were no problems with a slug of water traveling down the drain pulling a partial vacuum that could pull the water out of the trap.  The bathroom already has two vent stacks running up through the roof; the air admittance valve makes having a third unnecessary.  Looks like this: 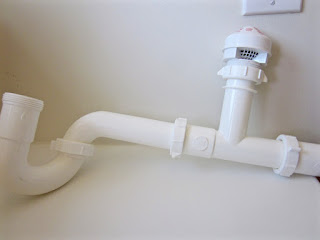 Here's a photo of the plumbing installed under the sink: 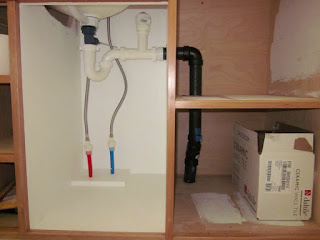 Now all I need is some water for the faucet!

We've had some cool weather the last week that allowed me to work up in the attic in the morning, and the new water supply system is now pretty much done.  On the day of the transfer from the old system to the new PEX system, I will have to reroute temporary connections running to the pottery studio sink and the washing machine, and then connect the main 1" supply feed from the pressure reduction valve (where the water comes into the house).

I've also been getting ready to install the new gas line to the water heater, which is a vital part of the new water supply system.  I decided to usurp the branch line feeding the gas furnace in the attic, and have obtained the required cut and threaded black steel pipes to do that installation.  I'll need another cool morning to do prep work, and then a longer period to shut off the gas and make all the connections.  We're heading into a period of warmer weather, so that may not happen for a week. 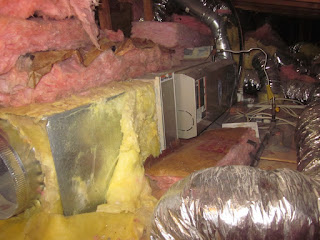 Since I will have to remove the gas line to the furnace, and I had to clear away the return ducting and part of the intake plenum to lay out the new gas line, it means the furnace has seen its last days (and must be removed — what fun!).  Which also means I'm now committed to getting the new heat pump (and new efficient ducting) this fall.

After I get the new water system operational, I will make another go at getting the kitchen countertop fabricated (another big milestone).  Once the new PEX water supply system becomes operational, it would indeed be nice to have a functional kitchen sink!