Part 5?  When was there a Part 4?  Long time ago: June 2016.  Since then, I've been using the gutted guest bathroom for storage, and have had to find other places to put all that stuff in order to continue bathroom work.   The link for Part 4 — is here.

This is the photo showing the state of the guest bathroom at the end of Part 4: 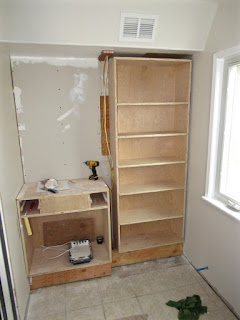 The open shelf unit in the photo is just sitting there, not fastened to the wall.  I removed it to paint it, then returned it and screwed it to the wall and base.  The wires dangling down at the left of the shelf unit are for light switches and electrical receptacles.  Obviously they needed to be enclosed, so I added a piece of half-inch plywood flush with the right side of the vanity cabinet.

Also in the photo below, I've added cherry edging to the front edges of the vanity, covering the plywood. 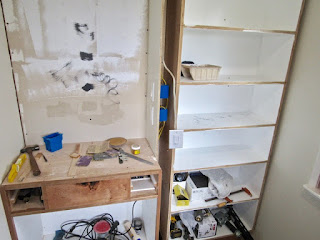 There are two receptacles: 1) one on the right side of the vanity for plugging in all those small appliances people use at the sink, and 2) another one inside the lower vanity, behind the future doors, which will be used for a plug-in power supply (wall wart) for low-voltage electricity for the LED light strip that will run around the future mirror.  Power to that receptacle is controlled by a switch just above the vanity receptacle (which of course will then simply turn on the mirror lighting).  There is one more light switch on the front of that electrical channel for the overhead light; that switch is a motion-sensing and dimming switch, so when you walk into the bathroom, the light comes on, and when you leave the light goes off.  If you're in the bathroom and stay very still, the light shuts off, leaving you in the dark. 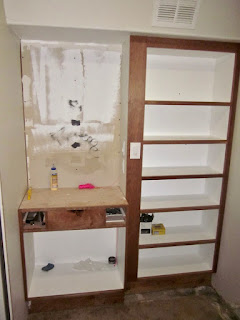 Here's a closer look at the electrical switches and vanity receptacle.  The pink nylon string running into the hole is so I can pull the wall wart wire up from the inside of the vanity. 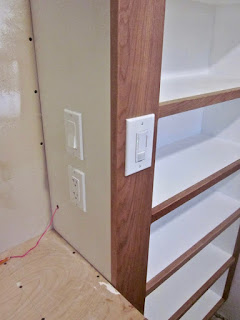 Next, I need to find a white acrylic vanity top with an integral sink.  I can get a Corian brand one online for something in excess of $600 that may only rarely see use.  Hmm, no thanks.  Home Depot used to sell generic vanity tops to spec; not apparent that they still do, but that's something I need to check.  Then hook up the plumbing.  Then buy and mount a mirror and install the LED strip lighting.  Then of course there are the four tiny drawers and the two doors for the front of the vanity, but considering I still haven't built the door for the front of the master bathroom vanity . . .

I can order the bathtub and drain any time, but by now I've figured out I shouldn't do that until I'm ready to install it.  That could be Part 7.  😮

I've started building a set of nine more drawers — all solid wood dovetail drawers, including six of the half-blind variety.  Might these be the subject of my next post?  Hard to say.

There are other things I need to do on the house and yard.  I mean, not things worthy of a post.  Painting stucco.  Scraping and painting trim.  Extending my retaining wall (after five years of procrastination 🙂 ).  Yard work, including transplanting palm and banana trees.  I often feel reluctant to do this sort of work because it causes big gaps in blog posting.  But so be it.  I may throw in a photo.  I may do a blog on making a key lime cheesecake.  Who knows?  Not me.

And I need to adopt another dog.
Posted by Chris Llana at 7:26 PM