Last September I replaced the 35-year-old shingles on the main part of my house, including the roof on the new porch (which is similar in shape to the new roof on the extended garage, but much smaller).  I documented that long job in two posts in some detail, so I won't dwell on the minutia this time.

I have an attached garage, but the roof on the garage is not at the same level as the main house roof, so it's essentially separate.

After stripping the old shingles and roofing felt, I had to cut off the overhanging board that the builders of my house used instead of a drip edge.  Mark a line using a little jig, then cut with a circular saw (a full size saw for the part where I could stand on my house roof, and a small trim circular saw on the other side where I was precariously hanging off the edge).

In this photo of the peak of the garage roof, the offending overhang is shown on the right side.  On the left, I have already cut off the lip and painted the fascia. 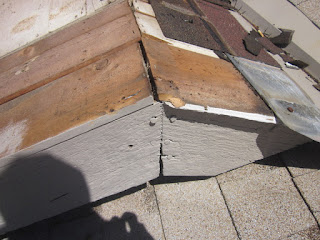 With the bare roof prepared, I put on black roofing felt.  There is a newer plastic sheet material, but for whatever reason (including cost, and the roughness of the old deck on my roof), I bought the thicker old stuff.  This goes to the edge of the roof, and then metal drip edge is added.  Here on the Wast Coast, Home Depot offers much less variety in drip edge material (to my dismay), so I ended up using bare metal edge that was only 2" wide, rather than the fancier 3" variety I have used in the past.  Building practices on the East Coast are definitely different than what California does — more substantial in the East, I suppose because of the harsher weather.

So here is the drip edge I installed — two photos: 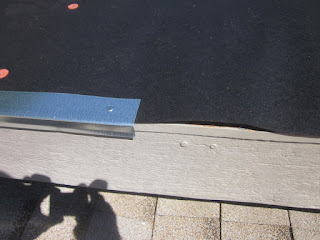 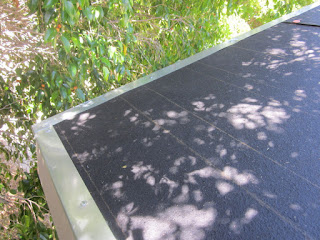 Next, along the edges of the roof, goes first course shingle material.  That's so the bottom of the first real row of shingles has something under it (water seeping between the seams of the shingles must be met by another shingle) .  The second row overlaps the first, etc. but there is no proper row below the first row.  Past practice was to cut the bottom off shingles and nail the top part to the roof edge, and then whole shingles on top of that, but now you can buy long rolls of first course shingle material that has adhesive on the bottom (and top).  No photo (other than if you want to go back to September 2018).

So start applying shingles at the bottom and work your way up.  My roof was more complicated because of the new garage extension gable, which meant there were valleys, necessitating weaving the shingles together where the two roof planes intersected.  Need to put the middle of a whole shingle over the valley center, and no nails in the middle. 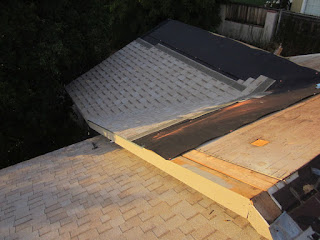 Ready to start applying shingles to the second side: 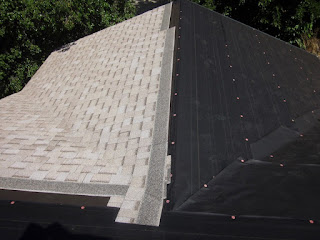 I put these marks on the roofing felt (with a yellow construction crayon).  You can see the black marks on the board, taken from the shingles in the other side.  In theory, the spacing of the shingles should be uniform, but small variances can add up (or cancel, but better be safe than sorry). 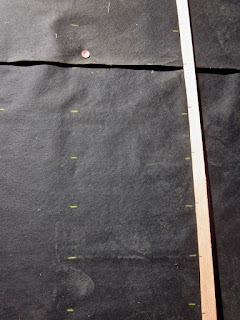 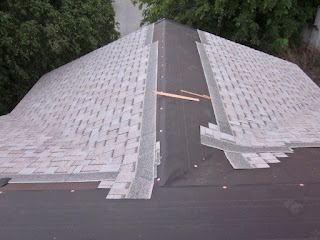 When both sides met at the peak, it was time to apply special ridge shingles, because at that point, the row of shingles on the main part of the roof had to go on top of those ridge shingles.  Finished front of the garage roof, two photos: 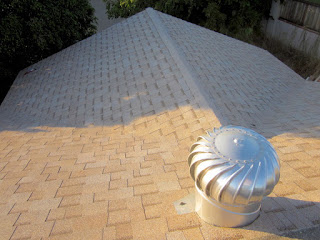 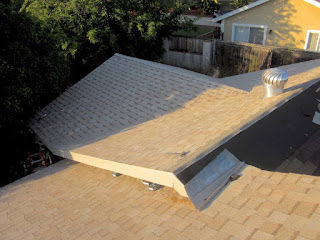 Which leaves the back of the garage roof, which mostly still has the old shingles on it.  The back part of the garage roof is a big simple rectangle, and I'm not going to say anything about that (although it will still be a lot of work — just not anything new or different).

So it's been hot here, and roofing work in the middle of the day is brutal, so during most of those periods, I worked on getting the (shady) walls prepared for stucco.  To wit, putting up two layers of black stucco underlayment and two layers of wire mesh.  The next post will be about applying stucco.  I will, however, supply photos of the finished roof, and maybe some of the freshly scraped and painted fascia and eves.  Refinishing the underside of the open eves is nasty work (full face respirator).  Probably why it seems not to have been done since the house was built (1984).  Sigh.

Should be done well before the fall rains arrive.
Posted by Chris Llana at 7:17 PM