Well, it's been a long time since the last post.  That was about putting new shingles on the roof, but ended with only the front part of the new garage roof with shingles on.  So after writing that shingle post, I still had to strip the old shingles off the back part of the garage roof, clean everything up, then apply the new shingles.  But now that's done (and before the first light rain of the season). 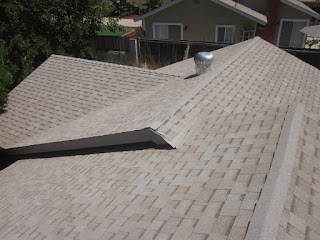 Before starting on the process of applying stucco, I pulled three photos of the garage extension west wall progress for context.  First is early framing, then plywood, then the first coat of stucco on. 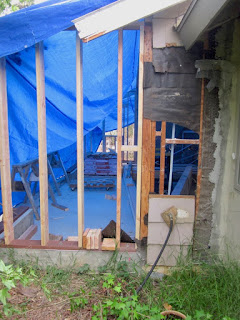 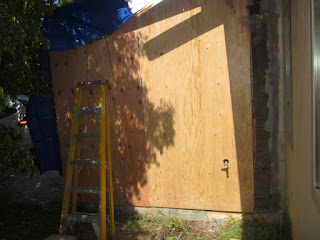 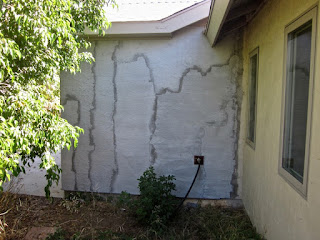 Some of my posts from a few years ago detailed the nitty-gritty details of preparing for stucco; this is going to be the abridged version.  So you start with the sheathing (plywood), then staple on two layers of a black waterproof paper underlayment.  After that you need some sort of metal lathe — I use two layers of wire mesh (even though only one is called for) because two layers better anchor the stucco.  The wire mesh is fastened with "furring nails" placed over the underlying studs (the furring nails have a thick fiber washer that is used to hold the wire mesh slightly off the surface of the underlayment).  I then further attach the wire mesh with quarter-inch wide staples to the plywood between the furring nails so it's solidly attached to the wall.

Then the first coat of stucco is applied (the "scratch coat", called that because after it is applied, a tool is run over the surface to put furrows or scratches in it, which gives the second coat something rough to adhere to).  Like this: 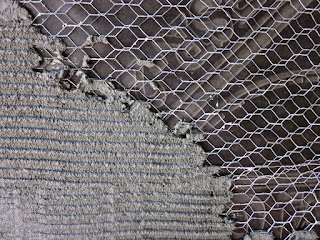 When I first started doing stucco, I had difficulty getting it to adhere to the corners, until I found and bought a special small trowel for corners.  Nice. 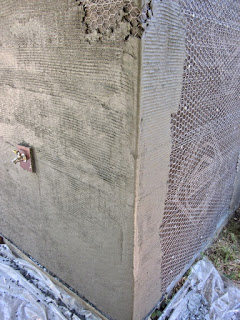 This next photo shows my progress on the front wall.  I did one section at a time, the size of each section determined by how far one 80-pound bag of stucco mix would cover.  I would generally only do one bag each day, then find other things to do the rest of the day.  If all I had to do was apply the stucco, it would go a lot faster and I could cover a lot more area at a time.  The limiting factor is mixing the stucco, by hand, which is why stucco crews employ power mixers and one person who does nothing but mix the stucco and deliver it to the people who are putting it up on the wall.  Again, just one of me (and climbing up and down an 8-foot ladder for the high parts).  Not speedy.

So distinct sections, and overlaps that show.  If I could do a whole wall at once, I could smooth it out while it was all wet, and it would be pretty.  Instead, I call my surface finish rustic.  You have to pay extra for that. 🙂 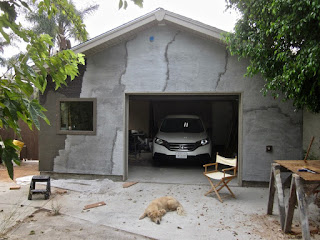 The east wall (on the left side in the above photo): 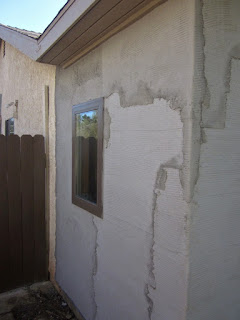 And a soffit detail (remembering that here in Southern California soffits are unusual, compared to the East Coast): 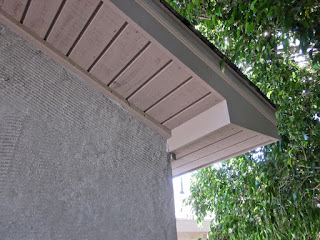 And the new front of the garage with the first (scratch) coat of stucco applied: 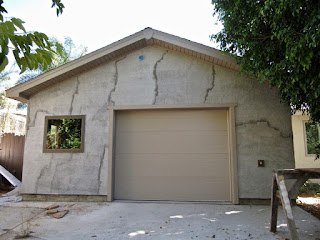 So sorry, this is where this stucco post ends.  Call it Part 1.  If I waited to do this post until after putting on the second (brown) coat, and then three or four weeks later for applying the special elastomeric stucco paint (which ensures a uniform color), you might think I had died.  So the next post should be on the final coat of stucco (and new puppies prep!🐶).

Another note: the new Andersen windows in the photos are darker than all the other windows and trim in the house, even though they are supposed to be the same Andersen "Terratone" color.  I will have to paint them to match.  Either Andersen decided to change the color after decades (but keep the old name), or someone at the factory screwed up.  No matter. 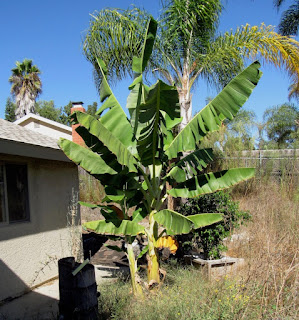 I read a web document on banana trees in Southern California that said banana trees in this area had to kick out 44 leaves before the bananas arrived, in which case I need ten or so more leaves before the big corm/flower emerges.  Another bit of wisdom was that it takes about 18 months from new baby tree to bananas, and that the corm (fruit/flower) and tiny bananas emerge in the fall, are pretty much dormant over the winter, and mature in the spring.  We'll see about that. 🙄

I talked about banana tree offspring last time — "pups."  My tree had four of these sprouting from the base.  I dug out #1 and #3 and put them in pots; they are happily growing and now about three feet high (I'll put them in the ground this winter).  #4 I just cut off.  #2 I left in the ground and it has taken off — now about eight feet high (you can see in the photo).  It now even has its own little pup poking out of the ground.

Getting lots of water and fertilizer.