The last post took the outside of the garage extension up through the stucco scratch coat.  Since then, I applied the second (brown) coat, and then the first coat of Home Depot's Elastomeric stucco paint (needs two coats).  That paint has the consistency of pancake batter, and maintains some rubber-like stretch after it dries — so it bridges any cracks that might have developed in the stucco, and also will stretch across any new cracks that might develop in the future.

Here's the front of the garage with the second coat of stucco applied: 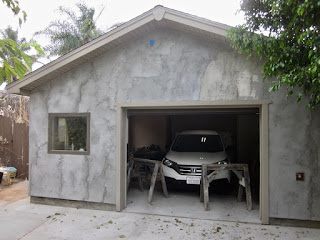 And with the stucco paint: 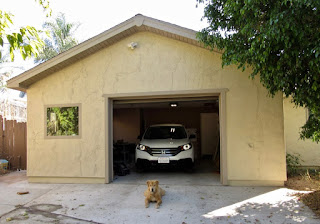 And with the door closed: 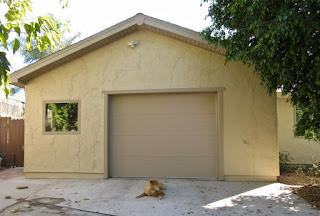 See how easy that was?

Now on to the miscellaneous updates.

Yes, we have bananas!  But very peculiar indeed.  First, I would like to clarify that bananas are officially classified as berries. (!)

Leaf after leaf grew from the tree, until finally this reddish thing pushed out like an Alien chest-burster. 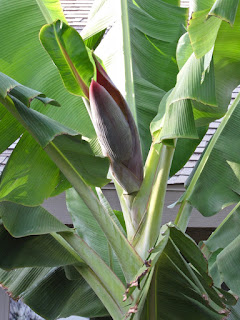 Which continued to grow bigger and heavier, and began to lean over.  The petals (or whatever you might call them) started to peel off, revealing rows of tiny green bananas, with strange little flowers attached to the end of each. 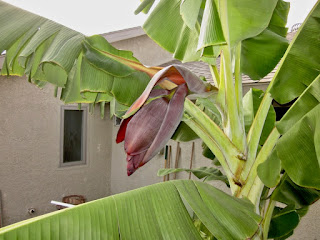 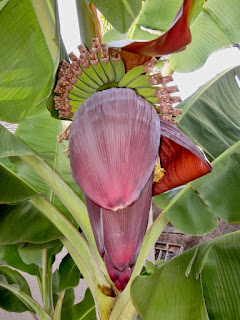 Until lots of little bananas and the end of the big flower thing. 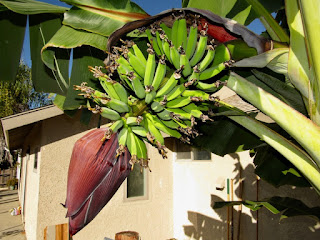 At that point the petals stopped peeling off, and a whitish liquid started to seep out from that red thing, attracting ants.  So I chopped it off (which reportedly will allow the previously emerged bananas to grow larger, but we'll have to see about that). 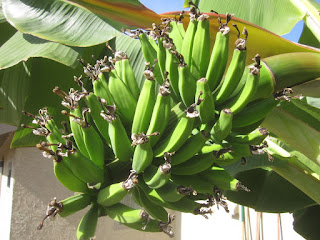 I cut open the red end to see what was inside.  Looked like row after row of immature chest-bursters (but what do I know?). 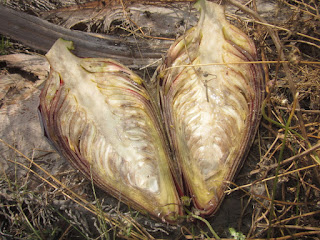 At this point (the beginning of November) the weather is supposed to be getting cooler (not), and the banana development is supposed to slow to a crawl until Spring, when they continue to grow longer and fatter, until they ripen.  So stay tuned . . .

That which is the reason for the garage extension.  In previous electric car updates I covered several potential candidates (BMW i3, Tesla Model 3, etc.).  I want to talk about two more for this episode — to wit, the VW ID.3 and the Tesla Model Y.

The VW ID.3 is a Golf-sized car on the outside, and because of the compactness of electric motors (compared to old-fashioned fossil engines), the ID.3 is Passat-sized on the inside.  Sort of like the Tardis. 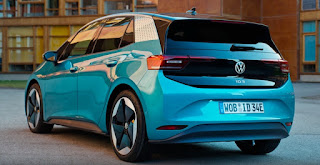 It went into limited production today (or yesterday), but won't go on sale until next summer.  The cars may be used for test drives/education in the interim — not real clear about that.  The ID.3 is a really nice car, and the first of many ID electric vehicles in VW's pipeline.  It's also the car that's going to be a game-changer, following in the footsteps of the iconic Beetle, and the Golf.  The ID.3 is the next one.  After Tesla, VW is the second major flag carrier for electric cars going into the future.

Unfortunately, it will initially not be sold in the U.S., where folks tend to like bigger cars, SUVs, pickup trucks.  For the U.S. market, VW will be offering the Tiguan-size ID.4 (a small all-wheel-drive crossover).  The ID.4 will go into production late-2020.


The other EV of my immediate interest, and the one I will likely buy, is the Tesla Model Y.  It's a compact crossover based on the Model 3, but a little taller and with a hatch.  It will incorporate technical advancements and structural improvements developed over the course of the Model 3 production ramp.  It will also use improved battery tech (which Tesla plans to announce in the February/March time frame at an investor briefing).  The Model Y goes into production summer-fall of 2020. 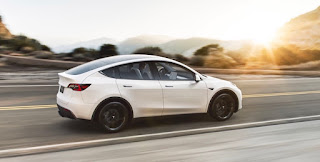 Pre-production Model Ys are undergoing testing now, and have been sighted all over the country.  Here's one driving down a highway next to a Honda CR-V:

I've been working on preparations for the arrival of two female puppies (from the same litter) on December 7.  It's going to be a full-time job.  I've been making things to accommodate two more large dogs in my house and in my car.  I will likely do a post, or an addendum to a post, in December.  Right now the puppies are just three weeks old, and frankly, aren't much to look at (faces only a mother would love, or a dad).  But here is a photo of what they will look like when I bring them home (when they're eight weeks old): 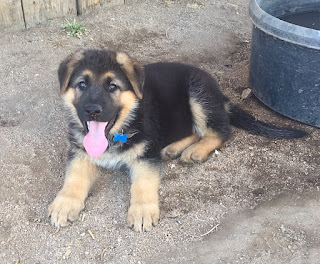 Times two.  And likely around 85 pounds (each) when fully grown.