The puppies are here!  The twins (fraternal) Molly and Maggie!  Adorable monsters!

Raising puppies is a 24/7 job.  Done right, that is.  I know some people put them in a crate overnight, and then in a crate when they run errands or go to work, but puppies are like human babies, except they don't wear diapers.

So no work on the house since December 7.  And no work in the coming weeks, as potty training for the twins is still a work in progress.  Lots of loads of laundry of the things they pee on, plus all the towels for soaking up the puddles from the plastic sheet that now covers the home theater floor.  It's not that they don't go outside — they do, mostly — but they each eat more than my 55-pound Golden Retriever mix, and drink a huge amount of water, and well, they have little bladders and short digestive tracts.  Sigh.

D'Argo, my dearly departed Australian Shepherd, wasn't accident-free until he was four months old.  These two little German Shepherds are actually showing progress, sometimes going to the door when it's time.  And they're now just past ten weeks, so good for them!

So if you've never had puppies, you should also know about the chewing.  Everything.  The floors are covered with chew toys, but they favor rugs and furniture, and cardboard boxes.  And each other — called sibling play. 🙄

There's the neighborhood walks (they first have to be leash trained — puppies aren't born knowing what "walks" are), there are the nature trail walks (including socialization with friendly humans and dogs), trips to the vet for puppy shots every three weeks, and trips to Home Depot (riding in a shopping cart — it's a big place and almost everyone in the store wants to pet the pups).

But there were also some construction projects required before the pups arrived.

First, the car.  The little German Shepherd pups are going to get real big before very long.  They're both female, so not as big as the males, but nevertheless their mother weighs 80 pounds and their dad tips the scales at 120 — so I expect they'll be 80-85.  And Sophie, my Golden Retriever mix isn't exactly tiny.  So more room needed in the car.

Fortunately, there are those wasted spaces for human's legs that can be utilized for more dog room.  All that was required was some tailored platforms and some cushions.  To wit (for the rear): 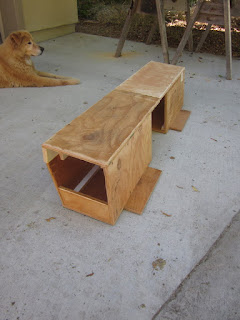 Cover the plywood with some padded duck canvas, and make a matching cushion: 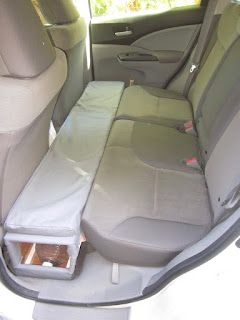 And then add a washable quilt to absorb the dirt: 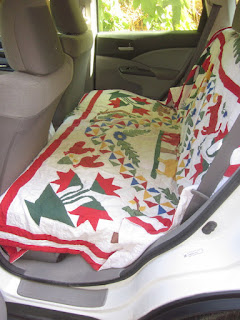 For the front passenger seat, something similar (driver's side remains untouched😊): 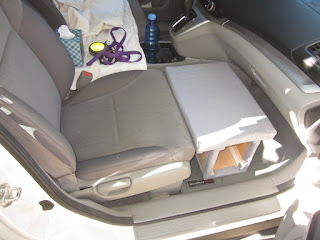 Inside the house, now with three dogs, the sofa is no longer big enough to accommodate all the fur.  So I made two dog beds, using an excess 3" memory-foam topper from my twin-size guest bed, and a surplus pillow-top mattress cover.  Bought some duck canvas to cover it.  Here are the constituent parts: 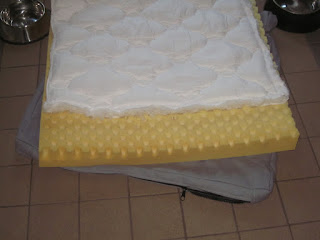 And Sophie modeling one of the finished beds (they now have easily washable covers made from old flannel sheets): 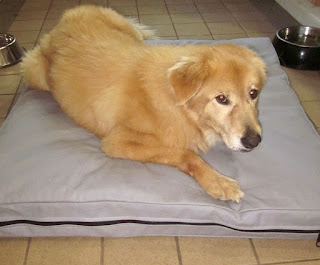 When D'Argo was a puppy, I just let him sleep at night wherever he wanted, and would get up two or three times overnight to take him outside.  Unfortunately, he would sometimes relieve himself while I was getting dressed, no doubt wanting to be ready to play as soon as he was outside.  The recommended training method for sleep at night is to put the pup in a crate, under the theory that the pup will not want to soil his or her bed.  So this time I built a pen for the pups, positioned next to my bed, where they would stay until I was dressed and ready to take them outside.  Works well.  I used scrap wood and some extra wire mesh: 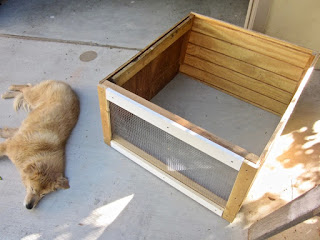 And this is what it looks like in place, with one of the dog beds inside (covered with plastic, flannel sheet, and towels).  I added a hinged lid after they grew big enough to climb out. 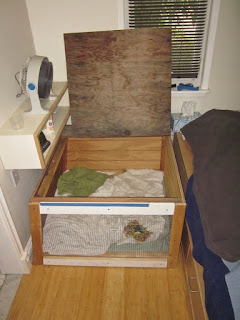 So I lift them out and take them to the door.  They run out and pee and poop, and then eat the birds' sunflower seeds, sticks, and the shriveled olives that have dropped from that tree.  A couple of nights ago, I noticed something had triggered my motion sensing garage light, and when I took them out, they would not leave the front porch.  Instead, they growled at the darkness, and then ran back into the house and availed themselves of the plastic on the home theater floor.  We have coyotes here; I see them often.  One even slept in my yard during the day awhile back.  I'm guessing one or more in the area scared the pups; good for them. 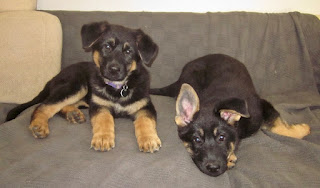 Molly's ears have come up, apparently the timing has to do with their teething.  They lose their baby teeth by the time they are four or five months old, and that is when the ears go up for good.  Big ears, big paws! 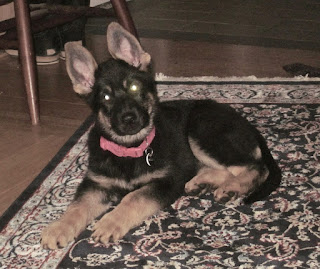 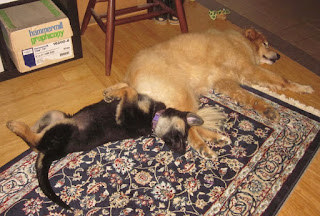 So next time hopefully I will be able to resume reframing the old garage side wall (to install the two new windows), and then work on finishing off the inside of the garage.  I need to do that before the solar panels and battery storage systems go in.  The pros will do that work.