The Home Theater - Phase One

When I moved into the house, I think my expectations were that it was going to be a little more livable than it turned out to be.  That was before I discovered the frights in the attic (little or no insulation, etc.), and a kitchen that literally had nothing in it worth saving.  I had thought the first things I would do would be to reupholster my sofa and matching chair, and to build a platform for my waterbed mattress.  Ah, so naive!

What I really needed was something to do in the evenings and some serious stress relief, and that turned out to be spelled h-o-m-e  t-h-e-a-t-e-r.  I had a small home theater set up in my parents' house's small dining room, using my old 5.1 speaker system.  It was fine, but I was serious about my movies, and wanted something exceptional.

When I read that my favorite speaker manufacturer—SV Sound, a small company privately owned by several audio enthusiasts who started out by building great subwoofers in Ohio—had just been bought out by a big corporation, I immediately ordered a full 7.1 speaker system from them:  their highly-rated MTS speakers and a 128-pound, 800-watt subwoofer.  All too big to fit my little dining room space, so the speakers sat in their boxes for a couple of years.

Once in California, I only had to find a dedicated space to put them.  The living room was big enough, but I needed a living room, and it had too many openings.  The master bedroom was almost as big, and had a ceiling that rose from eight feet in the back to twelve feet high at the front.  Twelve feet wide and sixteen feet front-to-back.  Not small, but for a home theater, it was marginal.  The side surround speakers should not be too close to the listener or the sound would seem localized, but since I would mostly be the only one listening, it would be okay,  Also, a 7.1 system has rear speakers that should be just as far behind you as the front speakers are, well, in front of you.  My Onkyo receiver supported nine channels, including two "height" channels, which I had read actually improved the sound field (and listening experience).  I had two smaller SBS speakers that would go up in the front corners of the room, almost twelve feet up, so I now had the makings of a 9.1-channel system.

The conversion of the master bedroom to my home theater would have to be done in two phases, because the room was open to the (old) master bathroom (which would become my only bathroom until the new "master" bathroom was completely gutted and rebuilt).  Phase two would wall off that opening and take care of some other finishing touches.

The big alteration I needed to do right away was to remove the closet at the front of the room. 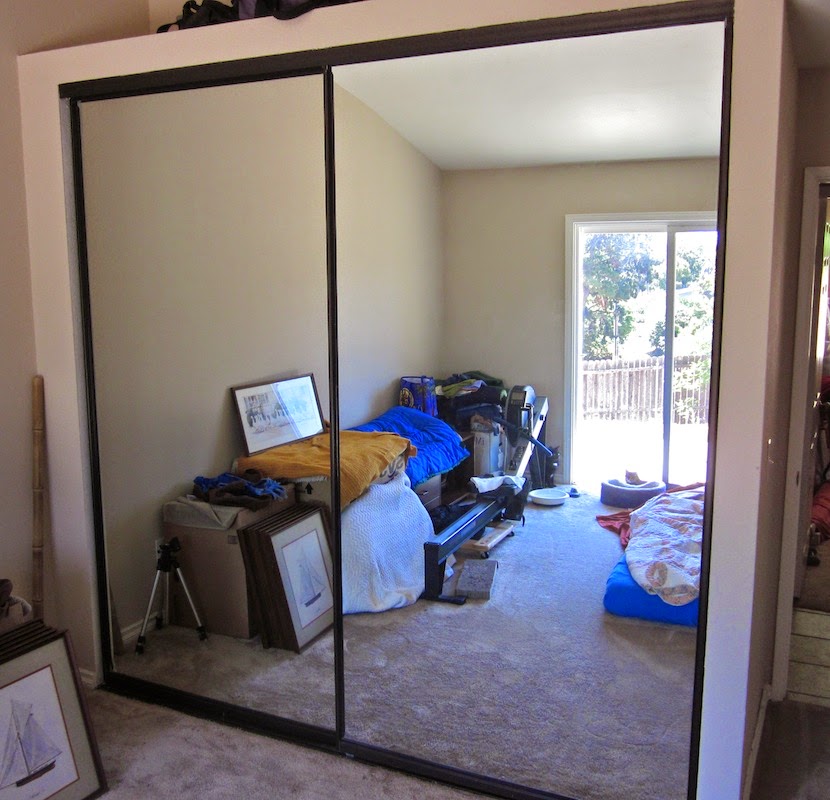 I removed the mirror doors and sold them on craigslist, then started demolition. 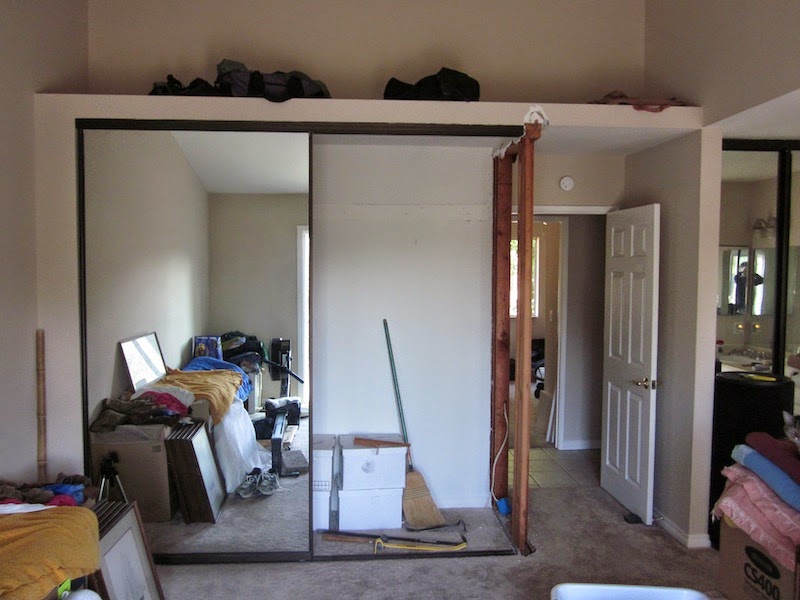 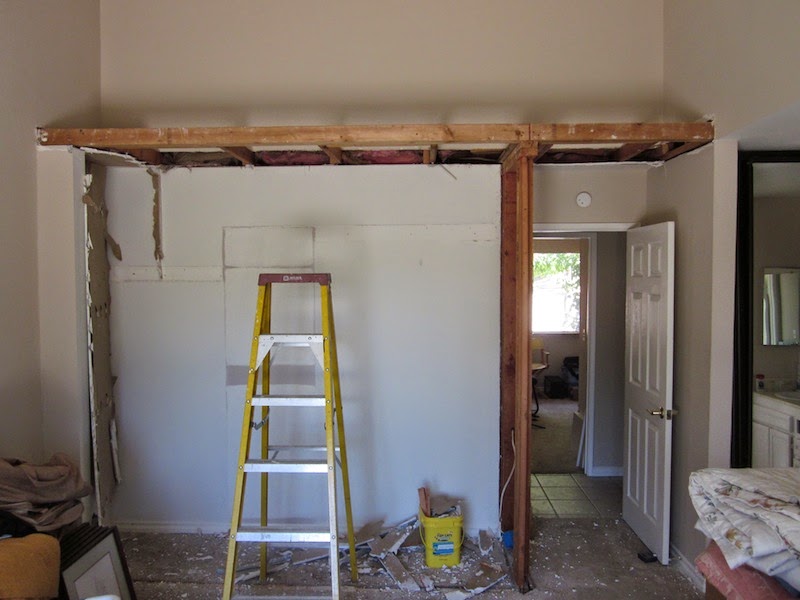 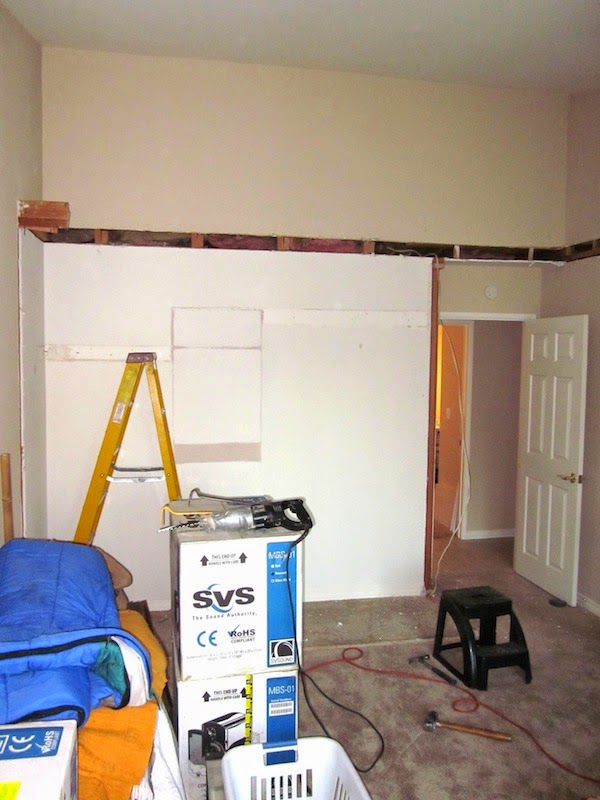 Then patched the drywall. 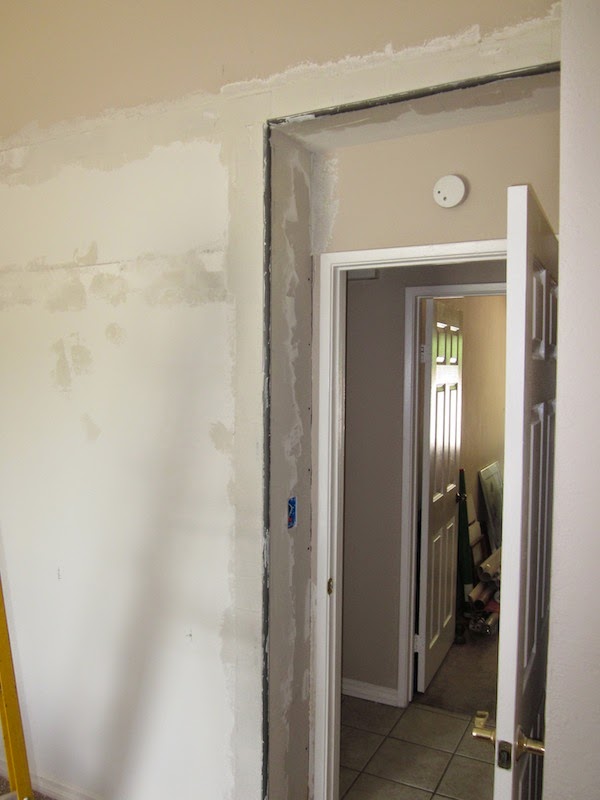 While waiting for joint compound to dry, I started building the pedestals for the four surround speakers (side and rear), and the platform for the center-channel speaker (mounted above the TV).  Then some paint.  Ideal viewing of movies is in a completely dark room, and home theaters ideally should be painted dark gray, but I opted for blue walls and a gray ceiling (to minimize reflected light). 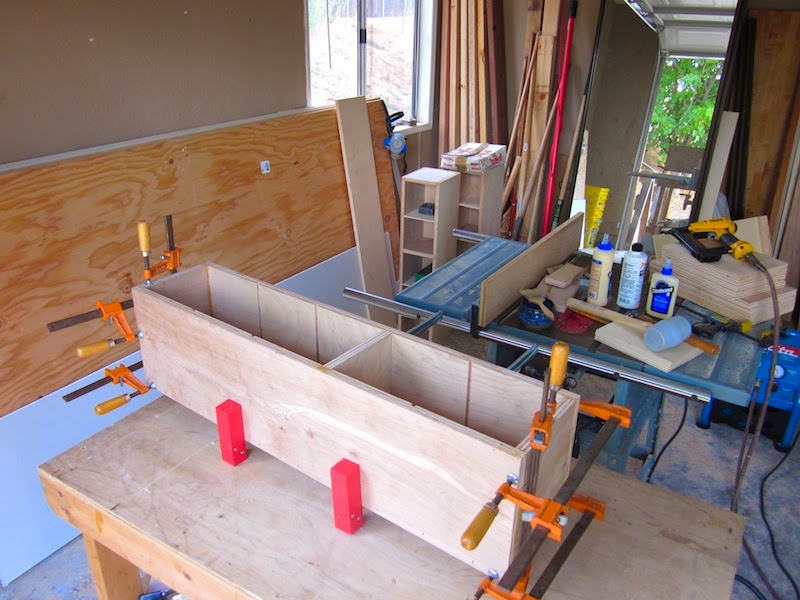 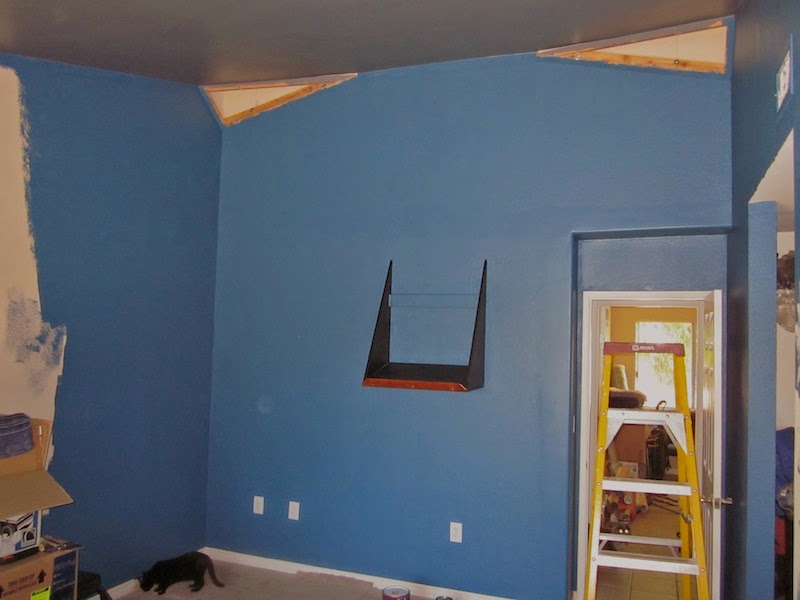 Running and hooking up the maze of wires was no trivial task. 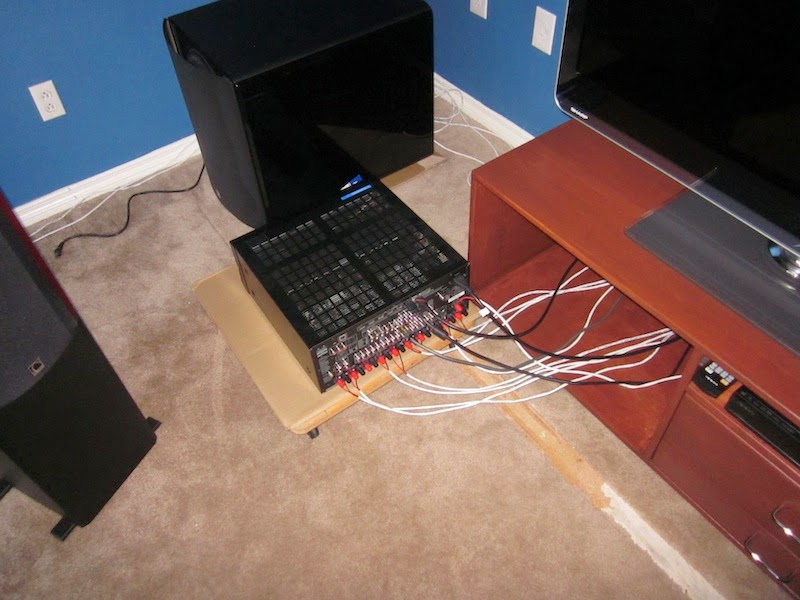 And then hang some sound absorbing materials, and declare the home theater operational.  The video quality on my 60" Panasonic plasma is exceptional, the sound system is awesome.  I love it!  For me, it has not been a luxury; it has kept my sanity, and it is very much used (and until the master bedroom is done, the home theater is also home to my temporary bed). 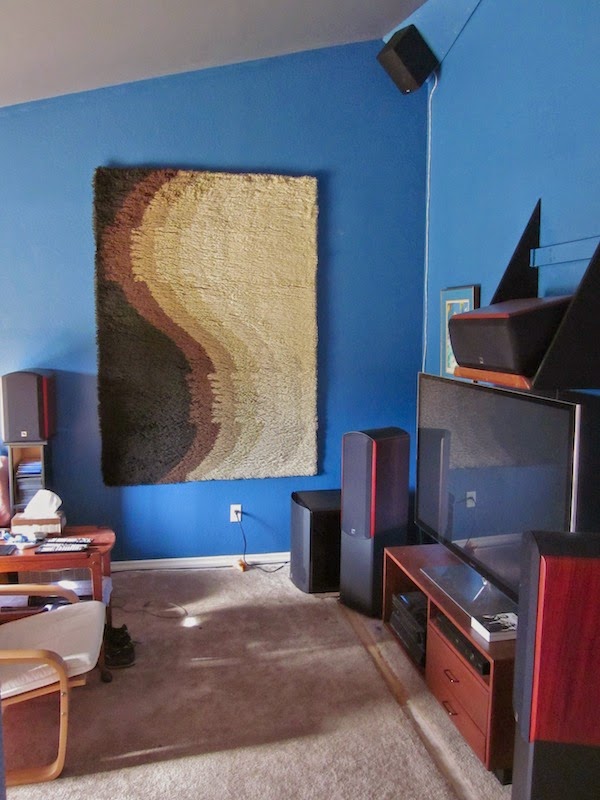