Here it is November and the last post was in September.

Things must be dragging.  Cabinet-building and drawer-making are slow, at least this time.  This post isn't even a full accounting of my current project, but since I haven't posted in a long time, I decided to do a Part 1 (and later a Part 2).  Hopefully I won't need a Part 3.

The credenza I'm building is a bi-level affair to provide a place for my huge 8-ink 13" x 19" printer, as well as eight drawers for associated office stuff.  It sits at right angles at one end of my desk, and the drawers are on the front and the back.  The advantage of building custom furniture is that it can fit the space and the specific use.

But the pictures will explain better.

The credenza was constructed in three sections:  a high part, a low part, and a base.  The high and low sections are each 30" wide, so the credenza ends up 60" wide.  Notice the drawer slides were installed before the carcasses were assembled, while I still had good access. 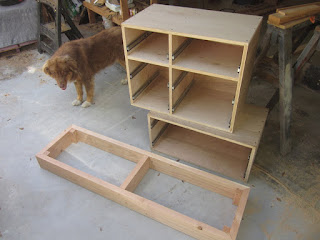 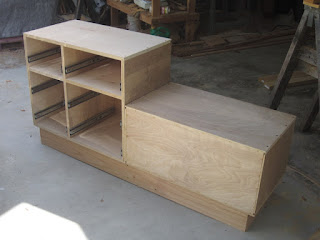 You may remember that the small pottery studio table I built was painted a dark blue with mostly cherry trim.  I liked it so much that I decided to use the same combination for the credenza (plus I already had the paint).

The credenza, when assembled, would be heavy and awkward, so I moved the three pieces separately into the house, and screwed them together in place.  Then painted the plywood sections, then added the cherry trim (and put a clear finish on that).  To wit, the low end (with printer sitting on top): 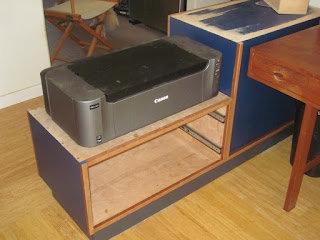 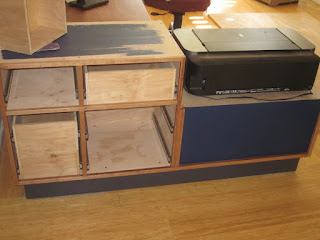 In the above photo, three of the drawer boxes are just sitting in their cubbies (I have now installed the drawer boxes on their slides, so they pull out).  Missing, of course, are the cherry drawer fronts, and the solid cherry credenza tops (separate for upper and lower sections).  I need to make another run down to the hardwood store to buy more wood for the tops, and also for some 1/2" thick poplar and maple for dovetail drawer sides.  Hence one of the reasons for a Part 2.

So I've also been building about a dozen drawers, out of birch plywood.  These drawers are not shallow enough to use solid wood with dovetail joints; the wide thin boards tend to cup (if you can even find boards wide enough).  As I mentioned previously, the plywood drawers are also more tedious to build, because the edges need to be covered and reinforced with custom-made maple trim (and I need to buy more stock for that, as well).

But I'm getting there, slowly.  Early in the process: 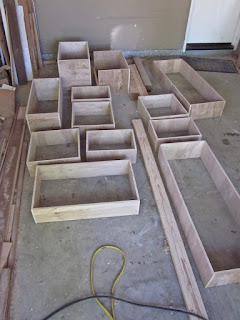 I've now glued these together, complete with bottoms.  Quarter-inch thick bottoms for the smaller credenza drawers, half-inch thick for the larger drawers, and one kitchen drawer that will carry a lot of weight got a three-quarter inch thick plywood bottom.

Part 2 of this credenza post will cover the finishing-off of these new drawers, with a diagram detailing joints.

Despite every effort to measure and cut out all the parts precisely, a couple of the drawers did not fit exactly within the two halves of the drawer slides.  My table saw is a "contractor's" saw, which means it's perfectly fine for the tolerances needed to build a house, but rather a challenge to get the precision needed for cabinet-making.  So a little rework is sometimes required.

One of the wide credenza drawers ended up being about a sixteenth of an inch too wide (1.5 mm) to fit between the drawer slides (which require very accurate tolerances).  So I will build a simple router jig to machine off a tiny bit of wood from the sides of the drawer under the slide.

The sides of one of the narrow credenza drawer openings ended up not perfectly parallel, which will require another (hopefully) simple jig to take off a thin wedge from one side of the drawer opening.  Unfortunately, it's the smallest opening, perfect width at the front but too narrow at the back, so I will have to maneuver a small router in those tight quarters, and expect the router will block my view of the work.  Ugh.  Stay tuned to see how that turns out.  ☹️

Drawer work is tedious.  It's nice to see (and use) the finished drawers, but they gobble up weeks with little progress to see from one day to the next.  Nicer projects in the wings.  The second bathroom is beckoning (a small room with a visually gratifying payoff).  Even more gratifying will be the garage extension.  The concrete work was done a year ago (or even longer).  The porch roof was the trial balloon for technique.  And that's done.

I had planned to wait until spring, when the rain will be done for another six months (or so), but it's rained just once this "rain year" (fall through spring), with none on the horizon, so I'm anxious to start.  The current plan is to break down the big garage project into smaller parts, and do these when the weather allows.

But if not doing the whole job at once, planning demands that the smaller parts of the whole each be able to stand alone.  When one part is done, the garage should be weather proof, and still able to be used as a garage.  So obviously I can't just start by opening up the roof.  Everything below that would have to be ready for the new roof section to quickly go on.

Some of my early projects were broken down into more than ten parts, so that's what I see happening over the winter.  New garage roof on in the spring.

Here's a photo of the end of existing beam/garage door header, exposed to get an idea of the challenge.  Big.  Long.  Heavy.  Needs to be moved up (about 16"), so bottom is flush with the ceiling.  It holds up the roof, so I'll need to build a temporary wall just inside it. 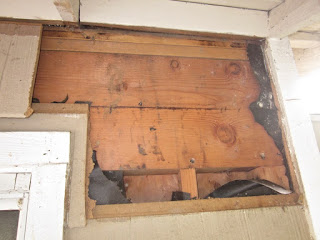 More fun than drawers.
Posted by Chris Llana at 8:23 PM