I think as the house becomes more "normal," it seems the urgency to complete new projects diminishes.  Or perhaps it's just that my time is spread out over more activities.  But progress continues.

As my last post concluded, I was working on the drawers for the credenza, as well as the solid cherry top.  Because the credenza is a bi-level design, there are actually two tops.  Each is made up of three separate pieces of cherry to achieve the full width.  The edges of the boards were run through my jointer to make them straight and true, so the glued seams would be without gaps. 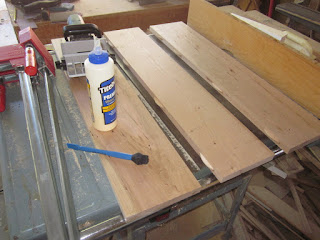 Here's a close-up of the biscuit joints that ensure the pieces will remain aligned when they are clamped together. 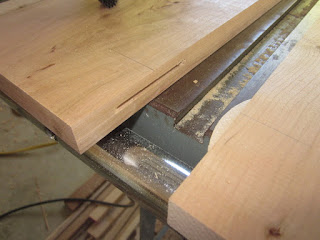 Here's what the upper top looks like finished.  I don't like to use stain because although it would make different pieces of hardwood match, it also hides a lot of the detail in the grain.  Wood is not a homogeneous material; each piece is different.  In this case, there is a lot of variability in cherry.  It doesn't always "match," but I like that. 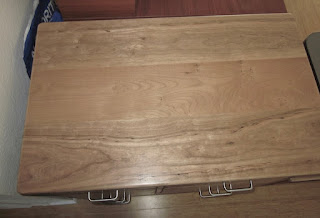 Here's one of the finished drawers open.  Because it's a taller drawer, I used cabinet-grade birch plywood, with a solid cherry front. 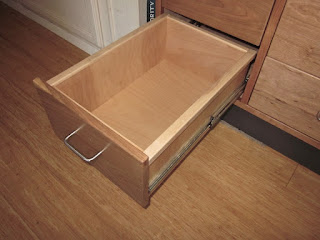 Plywood drawers are more difficult to build than solid wood dovetail drawers.  They have tongue and groove joints, and need special moldings to cover the edges, which I have to custom make.

The low side of the finished credenza faces the desk, and has two wide drawers.  In this photo, the shallower top drawer will be made from solid wood (dovetail joints) when I set up to make the next batch of dovetail drawers.  For now, the drawer front is just sitting there propped up by itself for the photo. 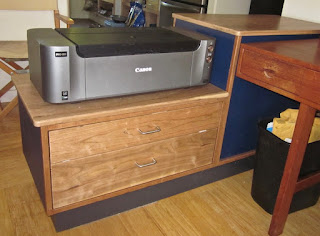 The drawers in the upper section of the credenza face away from the desk, toward the kitchen. 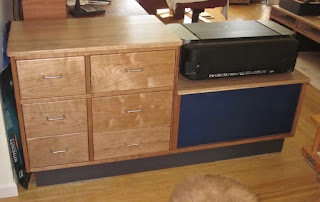 I've now made 56 drawers, with maybe another hundred to go (but who's counting).

Included in this latest batch of plywood drawers are two for the kitchen: a deep one for my cereal, and an even bigger one for either a bag of dog food, or my old KitchenAid mixer.  I buy my cereal from Trader Joe's, and since it's a long drive, I stock up on cereal and need a deep drawer to hold a good supply.  🙂 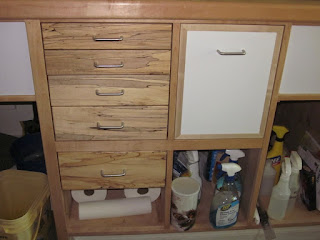 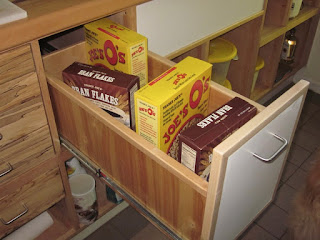 And the other big one (opposite side of kitchen): 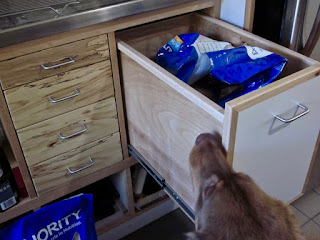 One of the reasons I was slow to finish the credenza was that I have been working on a couple of other projects concurrently.  The next post should present another piece of furniture — a living room "entertainment" console to sit below the wall-mounted flat-panel TV, to hold a blu-ray player, an A/V receiver, and a center channel speaker.  It will also have three dovetail drawers.  It's about half-way finished, so it should not be a long wait.

I previously planned to start on the garage extension as my next "major" project, but I've now resumed work on the guest bathroom instead.  That's likely to be a two-parter, post-wise.  Or three.  Or four.  Sigh.
Posted by Chris Llana at 7:01 PM